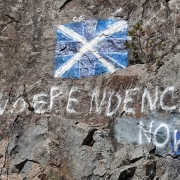 Level 0 – Nearly Normal: You are a fairly normal human being. You vote along party political lines but are not overly attached to one political system. People do not avoid you. You use social media for light-hearted entertainment, staying in touch with family and sharing memes. You can be in the company of fifteen people from five households and not bore them to death.

Level 1 – First Warning Signs: You start to think Janey Godley is funny on occasion while still conceding her material is more ‘miss’ than ‘hit’.

Level 2 – Whit aboot Scotland?: Lingering and persistent thoughts of ‘oor oil’ materialise in your everyday thinking. SNP policies seem attractive even though they appear unanchored from the real world of economics and society. You seem to think that Scotland is underrepresented and powerless, despite having 59 seats in Westminster and a devolved parliament. Somehow you think you were part of the Jacobite Rebellion in 1745, despite missing the events by well over 250 years.

Level 3 – Obsession with Flags: You avoid buying everyday products that have the ‘butchers apron’ on them, and refuse to purchase a product because of imagined ‘human rights abuses’ in contemporary England, while willfully ignoring them in other parts of the world. Persistent thoughts of oppression and persecution are normalised. You may have boycotted Tunnocks and Markies within the last three months for some slight upon Scotland. Nicola Sturgeon could burn a kitten in a chrome bucket and there’s a 73% chance you would still vote SNP regardless.

Level 4 – Nationalist: You are an active participatory member of Facebook sites such as ‘How can it be treason when England is a foreign country’. Every other political party are henceforth known as the ‘Tories’ even though they could be at the opposite end of the political spectrum from the actual Conservative Party. You can only really meet with people of a similar political outlook, outside. That’s not a government guideline; it’s because no one else can be bothered with you.