Road and rail links in Ayrshire and the south west have come under the spotlight as part of a UK-wide review. MSP Brian Whittle is leading calls for vital transport arteries like the A77, A75 and Glasgow South Western Rail Line to receive proper attention.

Here is our next meeting

How confident would you be to go against the grain in Sturgeon’s Scotland? What if you said something mildly controversial? Or flippantly shared a meme on social media? You’d be lying if you said ‘yes, totally confident here’, especially if you are employed in the public or third sector.

The SNP’s most mesmerising confidence trick is to somehow portray themselves as the anti-establishment political party de jure. Usually in direct contrast to what they perceive as the crumbling edifice of the traditional Victorian Ancien Regime in Westminster. Holyrood, however, is the Aquinian city on a hill, post-modern, with a post-modern, third-way party at the helm.

To be anti-establishment requires the ability to speak freely, question and, yes, on occasion, say something controversial to move the discussion forward, shine a light on a prickly subject or just to poke fun at it, something that the SNP is starting to deny to us to serve their political ends and narrative.

Instead, in Scotland, we are offered the bland smorgasbord of inane, tick-box, state-sanctioned, cookie-cutter opinions of the SNP with no deviation from their norm. Even worse is the selective picking of narratives because the SNP unquestioningly agree with them to the point where the degree of consensus and moral certitude within the party is ludicrous and I believe can only be enforced by a dangerously hierarchical leadership at the helm.

Recently, incidents in George Square have illustrated this. On the 17th of June, there was a counter-protest against Black Lives Matter and No Evictions Glasgow, caused by the mere discussion of the removal of statues from this location, probably exacerbated by the languid ‘covid malaise’ that we are all under at the moment. However, the First Minister and her collegial cohorts were quick to tweet that the counter-protesters were mere ‘thugs’ rather than perhaps discussing that they might, as a group, have a genuine grievance and feel that their history and identity was perhaps under threat? Some of the silent majority in the nation may even have a degree of sympathy with them, but to say so would be heresy and mean banishment for an SNP politician

However, those protesting for Black Lives Matter and No Evictions Glasgow were encouraged to ‘make your voice heard’, albeit online if possible, according to the First Minister’s supportive Tweet. One group’s cause is universally perceived as an absolute moral ‘good’ that is beyond questioning, the other group is hobbled, sidelined, criminalised and their views cannot even be discussed and are essentially ‘no-platformed’ by the Scottish Government

Elements of the state with a modicum of independence, such as the Scottish Police Federation, do fight back from time to time. In a letter to the Scottish Government, they were taken to task for their blatantly hypocritical attitude to the two groups of protestors from opposite ends of the political spectrum for this one issue: ‘The public cannot expect the police service to turn a blind eye to those who break the law in the name of a particular cause whilst demanding different treatment for opponents’.

Not only is the SNP policing certain opinions in our civic spaces, but their tendrils have also reached social media in Scotland as well. This is equally worrying, given that it was supposedly going to be the one place where freedom of speech could romp free in the electronic sunlit uplands, unbound by constraints.

I was first aware of this change, when Mark Meechan, aka Youtuber Count Dankula, made a video of himself training his girlfriend’s pug to do a Nazi salute and was convicted in a Scottish court of ‘inciting racial hatred’. Was the joke in bad taste? Yes. Was it funny? No, not really. Should it have gone to court? Absolutely not.

Recently, Police Scotland have been investigating people for doing the ‘George Floyd Challenge’. Worryingly, one person was allegedly reported for this after posting to Snapchat, a social media site which is more like a messenger service rather than Facebook. Again, utterly tasteless, but should a private joke have gone so far to involve law enforcement and potential ruination of someone’s career and life? No.

The proposed Hate Crime Bill (Currently at Stage 1 in the Scottish Parliament legislative process) would further enhance the Scottish Government to become an aggressive regulator of its citizen’s free speech and introduce a whole suite of new offences, including possession of material only likely to engender hatred. Of course, the level of offence is dependent on the person viewing the material in the first place, which is a dangerous precedent to begin with considering some people need content/trigger warnings now before watching a  TV show.

Indeed, we’re almost in the realm of ‘pre-crime’ here, not unlike the dystopian 2002 film Minority Report, where a group of ‘precogs’ could witness criminal activity before it could even happen and a team would arrest the perpetrator even though no crime had been committed.

Doing some research for this article reminded me of something. There has been a meme circulating for some time called ‘NPC’. NPC is a term borrowed from computer gaming and is short for ‘non-player character’. These are characters that you can interact with within a game and they respond with a limited, staid, scripted response, placed there by the developers. Not capable of anything else because they have never been programmed for anything else.

This is the SNP and their politicians now; certain subjects will be met with a standardised response and are viewed as a total benefit to society even if almost nothing truly can be in this messy, overly globalised society we live in. I expect that if you provided an SNP politician with evidence that uncontrolled immigration is not an unqualified good all of the time in all of the places or that people should sometimes be responsible for feeding their children for six weeks a year, they would just blink at you like an automaton waiting for input from its master, unable to respond, much like an NPC in a computer game, while spouting the same scripted response when you try to interact with it.

These proposed rigid laws and social policing of thought, stifle us all and in the long term will benefit no one, as what is happening at the moment is merely the thin end of the wedge and pressure groups have a horrible tendency towards mission creep as they tick off objectives and never disband due to their internal inertia.

But the arbitrariness of how the SNP support and nurture certain causes, while utterly condemning others, which at the very least, will contain a kernel of genuine concern is a damning indictment of their narrowness of vision and inability to see nuance and puts paid to their biggest lie: that they represent all of Scotland, not just the societal segments that they ideologically agree with. 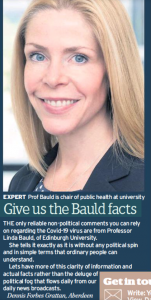 THE only reliable non-political comments you can rely on regarding the Covid-19 virus are from Professor Linda Bauld, of Edinburgh University. She tells it exactly as it is without any political spin and in simple terms that ordinary people can understand. Let’s have more of this clarity of information and actual facts rather than the deluge of political fog that flows daily from our daily news broadcasts. 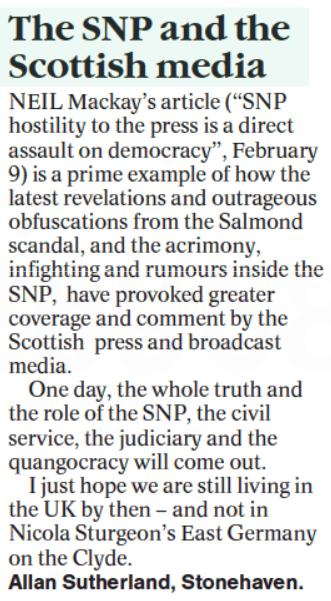 NEIL Mackay’s article (“SNP hostility to the press is a direct assault on democracy”, February 9) is a prime example of how the latest revelations and outrageous obfuscations from the Salmond scandal, and the acrimony, infighting and rumours inside the SNP, have provoked greater coverage and comment by the Scottish press and broadcast media. One day, the whole truth and the role of the SNP, the civil service, the judiciary and the quangocracy will come out. I just hope we are still living in the UK by then – and not in Nicola Sturgeon’s East Germany on the Clyde.

This site uses cookies. By continuing to browse the site, you are agreeing to our use of cookies.

We may request cookies to be set on your device. We use cookies to let us know when you visit our websites, how you interact with us, to enrich your user experience, and to customize your relationship with our website.

Click on the different category headings to find out more. You can also change some of your preferences. Note that blocking some types of cookies may impact your experience on our websites and the services we are able to offer.

These cookies are strictly necessary to provide you with services available through our website and to use some of its features.

Because these cookies are strictly necessary to deliver the website, refuseing them will have impact how our site functions. You always can block or delete cookies by changing your browser settings and force blocking all cookies on this website. But this will always prompt you to accept/refuse cookies when revisiting our site.

We fully respect if you want to refuse cookies but to avoid asking you again and again kindly allow us to store a cookie for that. You are free to opt out any time or opt in for other cookies to get a better experience. If you refuse cookies we will remove all set cookies in our domain.

We provide you with a list of stored cookies on your computer in our domain so you can check what we stored. Due to security reasons we are not able to show or modify cookies from other domains. You can check these in your browser security settings.

We also use different external services like Google Webfonts, Google Maps, and external Video providers. Since these providers may collect personal data like your IP address we allow you to block them here. Please be aware that this might heavily reduce the functionality and appearance of our site. Changes will take effect once you reload the page.