THE list of inquiries and reports to be published into all aspects of this inept and ineffective Scottish Government grows ever longer, highlighting the litany of failures borne by the people of Scotland. We have an education report to be published but, helpfully for the SNP, not until after the Scottish election; a care home inquiry which will help-fully not start until after the pandemic; the Salmond inquiry; and the Hamilton inquiry looking at potential ministerial code breaches. Further, we have a suspended MSP Derek Mackay, who has not crossed the front door of the Scottish parliament in nearly a year, still claiming his full salary and expenses. We have MP Margaret Ferrier being charged after an alleged breach of Covid regulations. This catalogue of failure and error is topped off by the report issued by the Auditor General for Scotland highlighting the failures to implement the appropriate pandemic planning over the past five years across care home capacity or the PPE requirements. The report, and it is an independent report, damningly says the Scottish Government ‘could have been better prepared to respond to the Covid pandemic’. Bluntly, this lack of preparedness has cost many lives. Perhaps now those with the blinkered view that the First Minister can do no wrong will open their eyes a little wider and realise that all is not milk and honey under her and her divisive, divided and deficient administration. RICHARD ALLISON, Edinburgh. 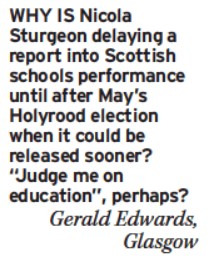 WHY IS Nicola Sturgeon delaying a report into Scottish schools performance until after May’s Holyrood election when it could be released sooner? ‘Judge me on education”, perhaps? Gerald Edwards. Glasgow. 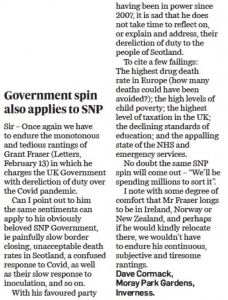 Once again we have to endure the monotonous and tedious rantings of Grant Fraser (Letters, February 13) in which he charges the UK Government with dereliction of duty over the Covid pandemic. Can I point out to him the same sentiments can apply to his obviously beloved SNP Government, ie painfully slow border closing, unacceptable death rates in Scotland, a confused response to Covid, as well as their slow response to inoculation, and so on. With his favoured party having been in power since 2007, it is sad that he does not take time to reflect on, or explain and address, their dereliction of duty to the people of Scotland. To cite a few failings: The highest drug death rate in Europe (how many deaths could have been avoided?); the high levels of child poverty; the highest level of taxation in the UK; the declining standards of education; and the appalling state of the NHS and emergency services. No doubt the same SNP spin will come out – We’ll be spending millions to sort it’: I note with some degree of comfort that Mr Fraser longs to be in Ireland, Norway or New Zealand, and perhaps if he would kindly relocate there, we wouldn’t have to endure his continuous, subjective and tiresome rantings. Dave Cormack, Moray Park Gardens, Inverness.

FMQs: Nicola Sturgeon accused of ‘negligence or incompetence’ for... Stronger for Scotland? It’s a No From Me
Scroll to top