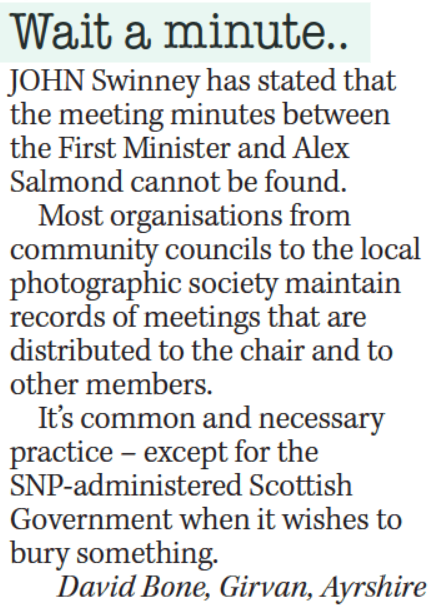 JOHN Swinney has stated that the meeting minutes between the First Minister and Alex Salmond cannot be found. Most organisations from community councils to the local photographic society maintain records of meetings that are distributed to the chair and to other members. It’s common and necessary practice – except for the SNP-administered Scottish Government when it wishes to bury something. David Bone, Girvan, Ayrshire 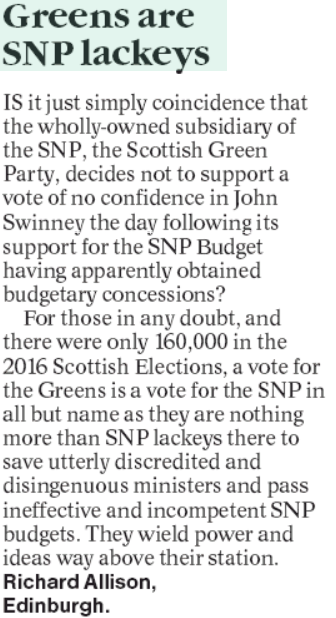 Is it just simply a coincidence that the wholly-owned subsidiary of the SNP, the Scottish Green Party, decides not to support a vote of no confidence in John Swinney the day following its support for the SNP Budget having apparently obtained budgetary concessions? For those in any doubt, and there were only 160,000 in the 2016 Scottish Elections, a vote for the Greens is a vote for the SNP in all but name as they are nothing more than SNP lackeys there to save utterly discredited and disingenuous ministers and pass ineffective and incompetent SNP budgets. They wield power and ideas way above their station. Richard Allison, Edinburgh.

IN the course of this week, we have learned that there had been a cover-up of accusations of sexual harassment involving the SNP Chief Whip at Westminster (“SNP ‘protected’ Chief Whip accused of groping two men”, The Herald, March 10), that the Scottish Government could lose many millions over the smelter contract at Lochaber (“What lies behind the latest worrying threat to Scottish manufacturing?”, The Herald, March 10), and that the First Minister and the head of the civil service held meetings, plural, with legal counsel but failed to take any notes (“Swinney expected to survive a no-confidence vote in Holyrood”, The Herald, March 10). Just how low can this SNP Government go? For how long must Scotland be humiliated like this? We thought we’d seen the worst with Derck Mackay taking £100,000 from the public purse to sit at home and do nothing, Margaret Ferrier traveling on public transport while confirmed as infectious and John Swinney releasing legal advice to the inquiry committee lust five minutes after Nicola Sturgeon completed her evidence. What utter contempt for a parliamentary process. This has to be one of the most untrustworthy governments in Europe. No wonder the SNP never uses its substantial borrowing powers; no-one would be willing to lend. Carole Ford, Glasgow.