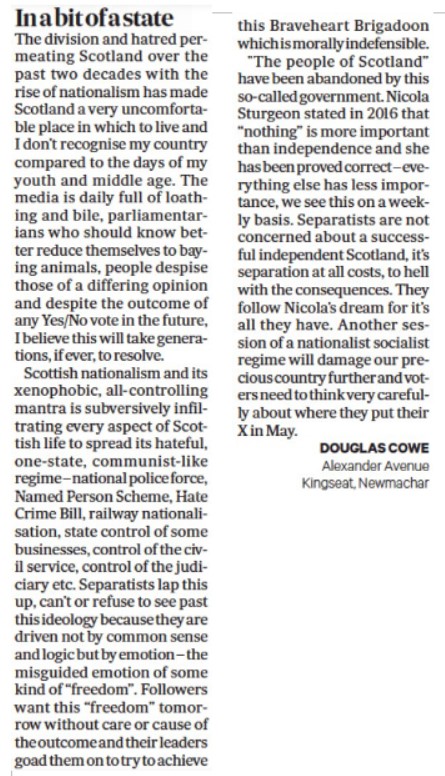 The division and hatred permeating Scotland over the past two decades with the rise of nationalism has made Scotland a very uncomfortable place in which to live and I don’t recognise my country compared to the days of my youth and middle age. The media is daily full of loathing and bile, parliamentarians who should know better reduce themselves to baying animals, people despise those of a differing opinion and despite the outcome of any Yes/No vote in the future, I believe this will take generations if ever, to resolve. Scottish nationalism and its xenophobic, all-controlling mantra is subversively infiltrating every aspect of Scottish life to spread its hateful. one-state, communist-like regime: national police force, Named Person Scheme, Hate Crime Bill, railway nationalisation, state control of some businesses, control of the civil service, control of the judiciary etc. Separatists lap this up. can’t or refuse to see past this ideology because they are driven not by common sense and logic but by emotion – the misguided emotion of some kind of “freedom”. Followers want this ‘freedom’ tomorrow without care or cause of the outcome and their leaders goad them on to try to achieve this Braveheart Brigadoon which is morally indefensible. ‘The people of Scotland’ have been abandoned by this so-called government. Nicola Sturgeon stated in 2016 that ‘nothing’ is more important than independence and she has been proved correct – everything else has less importance, we see this on a weekly basis. Separatists are not concerned about a successful independent Scotland, its separation at all costs, to hell with the consequences. They follow Nicola’s dream for it’s all they have. Another session of a nationalist socialist regime will damage our precious country further and voters need to think very carefully about where they put their X in May. DOUGLAS COWE Alexander Avenue, Newmachar. 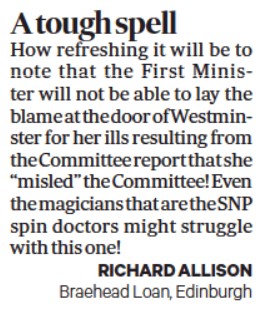 How refreshing it will be to note that the First Minister will not be able to lay the blame at the door of Westminster for her ills resulting from the Committee report that she “misled” the Committee! Even the magicians that are the SNP spin doctors might struggle with this one! RICHARD ALLISON Braehead Loan, Edinburgh 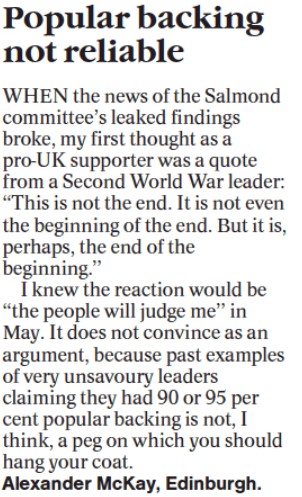 WHEN the news of the Salmond committee’s leaked findings broke, my first thought as a pro-UK supporter was a quote from a Second World War leader: “This is not the end. It is not even the beginning of the end. But it is, perhaps, the end of the beginning.” I knew the reaction would be “the people will judge me” in May. It does not convince as an argument, because past examples of very unsavoury leaders claiming they had 90 or 95 per cent popular backing is not, I think, a peg on which you should hang your coat. Alexander McKay, Edinburgh.

Nicola Sturgeon faces pivotal week with Alex Salmond reports due – The... Letters to the press, 23/03/21: Trident essential for Scots too, Salmond blame...
Scroll to top