IT is clear from Alex Salmond’s pronouncement that his new party does not have a prospectus. All It has is an objective: breaking up the UK. We know from 2014 that Mr Salmond regards 50 per cent plus one vote (of those who turn out ) as sufficient to win a referendum to leave the UK. This would be a recipe for disaster. Leaving a country to go it alone requires national solidarity of a kind that is not evident in Scotland. The SNP likes to compare Scotland with Norway. It is therefore worth noting that, in 1905. when Norway voted to leave its union with Sweden. only 184 out of 371.000 Norwegians voted to remain in the union. There was. then. a sense of Norwegian national purpose based on an overwhelming, near-unanimous result. In Singapore in 1962. more than 70 per cent of voters chose to leave British rule. In Scotland. polls have shown a pretty much 50:50 split. In Quebec, a second independence referendum was held in 1995. the first having been in 1980. In 1995, on a massive turnout of 93.5 per cent, the vote to separate was 49.42 per cent against a vote to remain of 50.58 per cent. Thereafter the Canadian government put in place a Clarity Act in 2000 placing clear conditions on attempts at secession. It retained the right for the Canadian parliament to decide on the wording of any separatist question. The Canadian parliament also has both the right to decide after a vote whether a clear majority had expressed a desire for separation and the right to override the result of a referendum. Separatism is scarcely an issue in Canada now. It is high time that we did the same. JILL STEPHENSON. Edinburgh.

Sir, – I was amused by Dick Winchester’s assertion in (Letters, March 24) that we Scots are victims of a “dismal and democratically unequal UK” when it comes to voting in Westminster. Far from being victims, we are extraordinarily fortunate and well represented. Greater London, which includes Westminster, has a population of 9.3million people, 70% greater than Scotland, but on a pro-rata basis nearly 30% fewer MPs than Scotland. On top of that, we have our own parliament with the greatest range of devolved powers in the world. Our appalling economic record means the EU will not permit Scotland to rejoin, which is just as well because being 1% of the size of the EU our influence on European policies would be about zero, quite unlike the very considerable clout we enjoy in the UK. Dr Richard Marsh, Bellabeg House, Strathdon, Aberdeenshire. 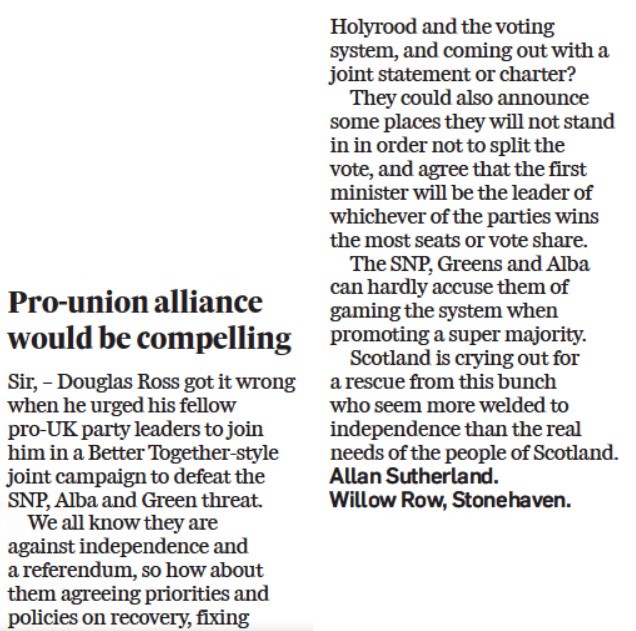 Sir, – Douglas Ross got it wrong when he urged his fellow pro-UK party leaders to join him in a Better together-style joint campaign to defeat the SNP, Alba and Green threat. We all know they are against independence and a referendum, so how about them agreeing on priorities and policies on recovery, fixing Holyrood and the voting system, and coming out with a joint statement or charter? They could also announce some places they will not stand in in order not to split the vote, and agree that the first minister will be the leader of whichever of the parties wins the most seats or vote share. The SNP. Greens and Alba can hardly accuse them of gaming the system when promoting a supermajority. Scotland is crying out for a rescue from this bunch who seem more welded to independence than the real needs of the people of Scotland. Allan Sutherland. Willow Row, Stonehaven.