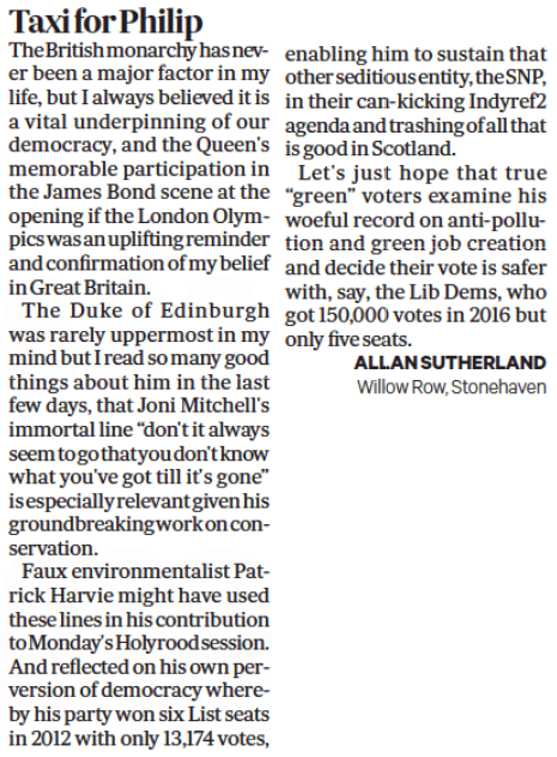 The British monarchy has never been a major factor in my life, but I always believed it is a vital underpinning of our democracy, and the Queen’s memorable participation in the James Bond scene at the opening in the London Olympics was an uplifting reminder and confirmation of my belief in Great Britain. The Duke of Edinburgh was rarely uppermost in my mind but I read so many good things about him in the last few days, that Joni Mitchell’s immortal line “don’t it always seem to go that you don’t know what you’ve got till it’s gone” is especially relevant given his groundbreaking work on conservation. Faux environmentalist Patrick Harvie might have used these lines in his contribution to Monday’s Holyrood session. And reflected on his own perversion of democracy where-by his party won six List seats in 2012 with only 13,174 votes, enabling him to sustain that other seditious entity, the SNP, in their can-kicking Indyref2 agenda and trashing of all that is good in Scotland. Let’s just hope that true “green” voters examine his woeful record on anti-pollution and green job creation and decide their vote is safer with, say, the Lib Dems, who got 150,000 votes in 2016 but only five seats. ALLAN SUTHERLAND Willow Row, Stonehaven 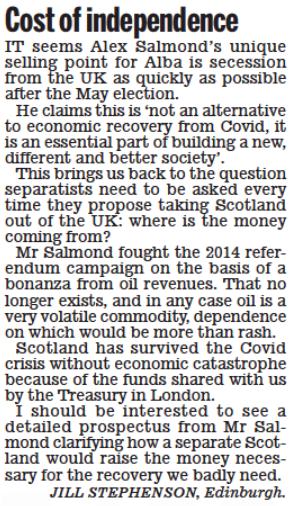 IT seems Alex Salmond’s unique selling point for Alba is secession from the UK as quickly as possible after the May election. He claims this is ‘not an alternative to economic recovery from Covid, it is an essential part of building a new, different and better society’. This brings us back to the question separatists need to be asked every time they propose taking Scotland out of the UK: where is the money coming from? Mr. Salmond fought the 2014 referendum campaign on the basis of a bonanza from oil revenues. That no longer exists, and in any case, oil is a very volatile commodity, dependence on which would be more than rash. Scotland has survived the Covid crisis without economic catastrophe because of the funds shared with us by the Treasury in London. I should be interested to see a detailed prospectus from Mr. Sal-mond clarifying how a separate Scot-land would raise the money necessary for the recovery we badly need. JILL STEPHENSON, Edinburgh.

It won’t do for Gill Turner (Letters, 13 April) to blame the Holyrood opposition for the care home Covid scandal because of concerns it raised about pressures on the NHS, any more than it should be given the credit for creating new space for the expected influx of patients by building the Louisa Jordan Hospital. Responsibility for care home testing policies and their deficiencies rests 100 percent with the Scottish government, which has always been keen to extol its micromanagement of the pandemic. However, it might be reasonable to blame the Chinese for the Louisa Jordan, which copied their successful Fangcang field hospitals in Wuhan at the start of the pandemic. Vaccination has been a joined-up UK enterprise. HUGH PENNINGTON Carlton Place. Aberdeen

Fresh review over completion date for Aberdeen’s Haudagain improvements –... Why Sterling is the UK’s silver bullet – PolicyExchange
Scroll to top