Nicola Sturgeon has said that she has promised not to “bludgeon” Scotland into supporting independence. However, every election since 2014 has been about independence, until a week before voting day where the first minister will say it isn’t until she does her acceptance speech, where she will say it is again. Her MPs in Westminster behave as if they are in the citadel of a despised foreign capital, while ceaselessly tweeting, posting and blogging about Scottish secession and how bad the union is for Scotland, but yet not providing tangible ideas to replace it. Her MSPs are much the same except they are on home territory. All this while repeatedly getting less than half the popular vote in Scotland. I might not be bludgeoned, but I’m tired and the constant campaign that the SNP has been running for eight years, it feels like being pecked to death by ducks. David Bone, South Ayrshire. 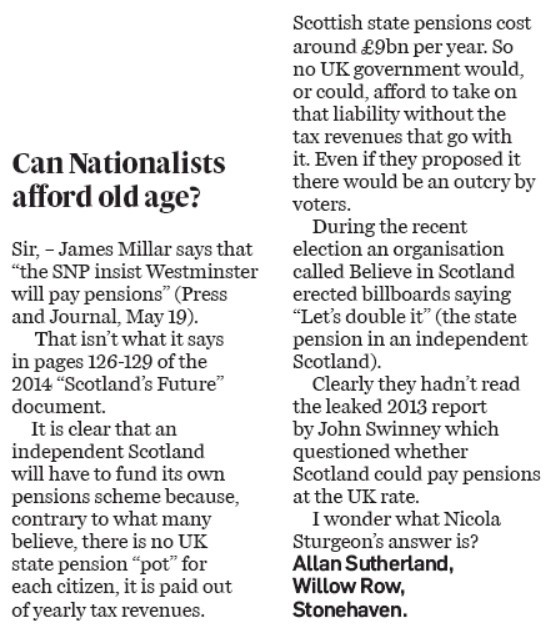 Sir, – James Millar says that “the SNP insist Westminster will pay pensions” (Press and Journal, May 19). That isn’t what it says in pages 126-129 of the 2014 “Scotland’s Future” document. It is clear that an independent Scotland will have to fund its own pensions scheme because contrary to what many believe, there is no UK state pension “pot” for each citizen, it is paid out of yearly tax revenues. Scottish state pensions cost around £9bn per year. So no UK government would, or could, afford to take on that liability without the tax revenues that go with it. Even if they proposed it there would be an outcry by voters. During the recent election, an organisation called Believe in Scotland erected billboards saying “Let’s double it” (the state pension in an independent Scotland). Clearly, they hadn’t read the leaked 2013 report by John Swinney which questioned whether Scotland could pay pensions at the UK rate. I wonder what Nicola Sturgeon’s answer is? Allan Sutherland, Willow Row, Stonehaven. 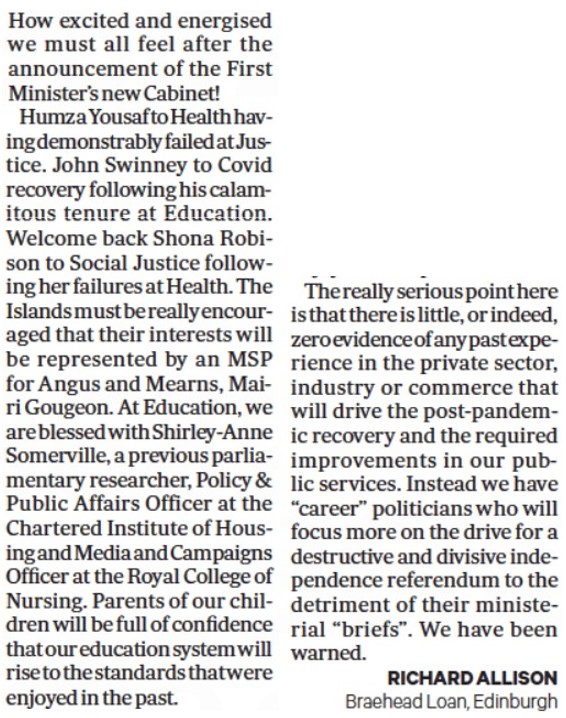 How excited and energised we must all feel after the announcement of the First Minister’s new Cabinet! Humza Yousaf to Health having demonstrably failed at Justice. John Swinney to Covid recovery following his calamitous tenure at Education. Welcome back Shona Robinson to Social Justice following her failures at Health. The Islands must be really encouraged that their interests will be represented by an MSP for Angus and Mearns, Mairi Gougeon. At Education, we are blessed with Shirley-Anne Somerville, a previous parliamentary researcher, Policy & Public Affairs Officer at the Chartered Institute of Housing and Media and Campaigns Officer at the Royal College of Nursing. Parents of our children will be full of confidence that our education system will rise to the standards that were enjoyed in the past. The really serious point here is that there is little, or indeed, zero evidence of any past experience in the private sector, industry or commerce that will drive the post-pandemic recovery and the required improvements in our public services. Instead, we have “career” politicians who will focus more on the drive for a destructive and divisive independence referendum to the detriment of their ministerial “briefs”. We have been warned. RICHARD ALLISON Braehead Loan, Edinburgh.