We still need your help!!

But we need to keep going. Local elections are next year and we have a number of administrative and web-hosting costs to cover.

We want to highlight the failings of the SNP on our news pages as well as the atrocious job they are doing in Glasgow, Edinburgh, the North-East and the South-West of Scotland.

Please consider donating to our Crowdfunder campaign by clicking on the image to the right. For every £5 we can reach 500 people and highlight the failures of the SNP and the risks of Scotland leaving the UK.

Thank you for your patience and the letters are below. 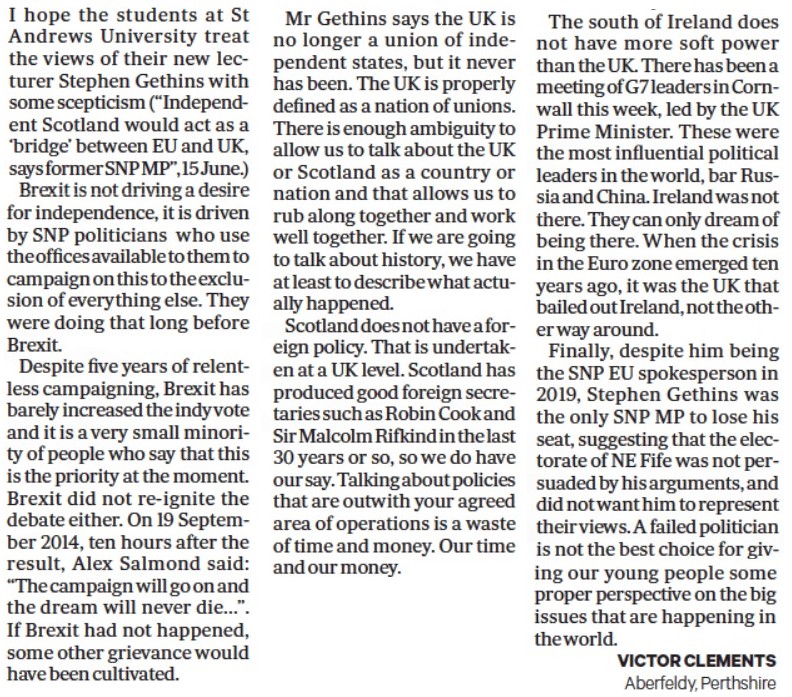 I hope the students at St Andrew’s University treat the views of their new lecturer Stephen Gethins with some scepticism (“Independent Scotland would act as a ‘bridge between EU and UK, says former SNP MP”,15 June.) Brexit is not driving a desire for independence, it is driven by SNP politicians who use the offices available to them to campaign on this to the exclusion of everything else. They were doing that long before Brexit. Despite five years of relentless campaigning, Brexit has barely increased the indy vote and it is a very small minority of people who say that this is the priority at the moment. Brexit did not re-ignite the debate either. On 19 September 2014, ten hours after the result, Alex Salmond said: “The campaign will go on and the dream will never die…”. If Brexit had not happened, some other grievance would have been cultivated. Mr. Gethins says the UK is no longer a union of independent states, but it never has been. The UK is properly defined as a nation of unions. There is enough ambiguity to allow us to talk about the UK or Scotland as a country or nation and that allows us to rub along together and work well together. If we are going to talk about history, we have at least to describe what actually happened. Scotland does not have a foreign policy. That is undertaken at a UK level. Scotland has produced good foreign secretaries such as Robin Cook and Sir Malcolm Rifkind in the last 30 years or so, so we do have our say. Talking about policies that are outwith your agreed area of operations is a waste of time and money. Our time and our money. The south of Ireland does not have more soft power than the UK. There has been a meeting of G7 leaders in Corn-wall this week, led by the UK Prime Minister. These were the most influential political leaders in the world, bar Russia and China Ireland was not there. They can only dream of being there. When the crisis in the Eurozone emerged ten years ago, it was the UK that bailed out Ireland, not the other way around. Finally, despite him being the SNP EU spokesperson in 2019, Stephen Gethins was the only SNP MP to lose his seat, suggesting that the electorate of NE Fife was not persuaded by his arguments, and did not want him to represent their views .A failed politician is not the best choice for giving our young people some proper perspective on the big issues that are happening in the world. VICTOR CLEMENTS Aberfeldy, Perthshire. 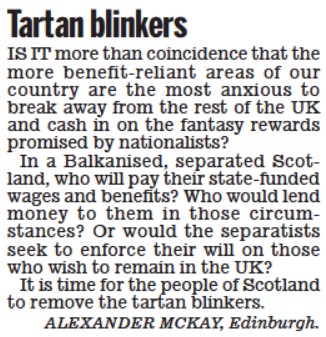 IS IT more than a coincidence that the more benefit-reliant areas of our country are the most anxious to break away from the rest of the UK and cash in on the fantasy rewards promised by nationalists? In a Balkanised, separated Scot-land, who will pay their state-funded wages and benefits? Who would lend money to them in those circumstances? Or would the separatists seek to enforce their will on those who wish to remain in the UK? It is time for the people of Scotland to remove the tartan blinkers. ALEXANDER MCKAY, Edinburgh.

Sir, – Alistair Ballantyne (letters June 11) appears intent on apologising for the SNP government’s failure to transfer social security powers from Westminster to Holyrood over a nine-year period. He also fails to mention that the bill for this transfer has almost doubled to an estimated £650m by 2025. Given the SNP assured us prior to the 2014 referendum that independence from the UK could be achieved in 18 months at a cost of £250m, isn’t this excuse rather far-fetched? And if the existing Department for Work and Pensions’ system is so appalling why is the Scottish Government paying the DWP more than £23m to run part of the Scottish benefits system? Elizabeth Robertson (Dr). Perth Road, Dundee.