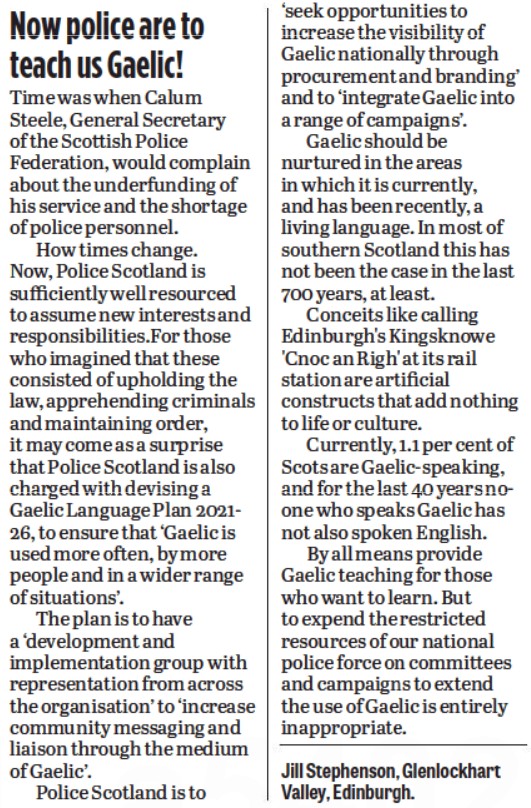 Time was when Calum Steele, General Secretary of the Scottish Police Federation, would complain about the underfunding of his service and the shortage of police personnel. How times change. Now, Police Scotland is sufficiently well resourced to assume new interests and responsibilities. For those who imagined that these consisted of upholding the law, apprehending criminals and maintaining order, it may come as a surprise that Police Scotland is also charged with devising a Gaelic Language Plan 2021-26, to ensure that ‘Gaelic is used more often, by more people and in a wider range of situations’. The plan is to have a ‘development and implementation group with representation from across the organisation’ to ‘increase community messaging and liaison through the medium of Gaelic’. Police Scotland is to `seek opportunities to increase the visibility of Gaelic nationally through procurement and branding’ and to ‘integrate Gaelic into a range of campaigns’. Gaelic should be nurtured in the areas in which it is currently, and has been recently, a living language. In most of southern Scotland this has not been the case in the last 700 years, at least. Conceits like calling Edinburgh’s Kingsknawe ‘Cnoc an Righ’ at its rail station are artificial constructs that add nothing to life or culture. Currently,1.1 per cent of Scots are Gaelic-speaking, and for the last 40 years, no one who speaks Gaelic has not also spoken English. By all means provide Gaelic teaching for those who want to learn. But to expend the restricted resources of our national police force on committees and campaigns to extend the use of Gaelic is entirely inappropriate. Jill Stephenson, Glenlockhart Valley, Edinburgh. 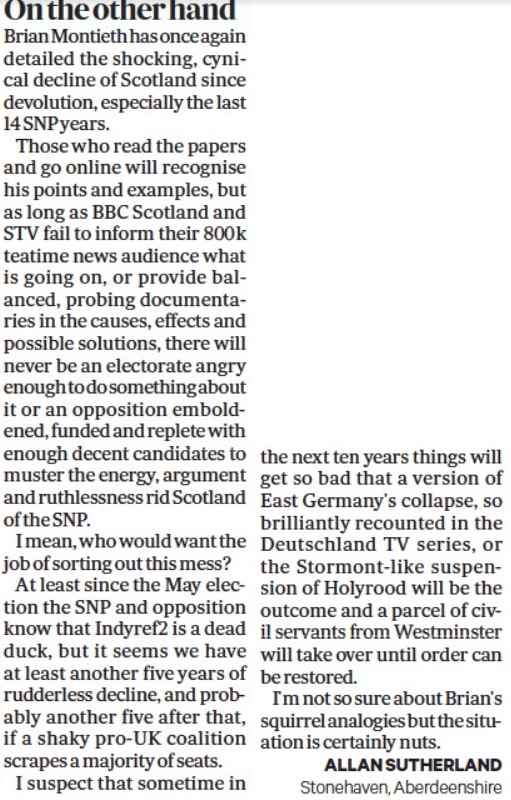 Brian Montieth has once again detailed the shocking, cynical decline of Scotland since devolution, especially the last 14 SNPyears. Those who read the papers and go online will recognise his points and examples, but as long as BBC Scotland and STV fail to inform their 800k teatime news audience what is going on, or provide balanced, probing documentaries in the causes, effects and possible solutions, there will never be an electorate angry enough to do something about it or an opposition emboldened, funded and replete with enough decent candidates to muster the energy, argument and ruthlessness rid Scotland of the SNP. I mean, who would want the job of sorting out this mess? At least since the May election the SNP and opposition know that Indyref2 is a dead duck, but it seems we have at least another five years of rudderless decline, and probably another five after that if a shaky pro-UK coalition scrapes a majority of seats. I suspect that sometime in the next ten years things will get so bad that a version of East Germany’s collapse, so brilliantly recounted in the Deutschland TV series, or the Stormont-like suspension of Holyrood will be the outcome and a parcel of civ-il servants from Westminster will take over until order can be restored. I’m not so sure about Brian’s squirrel analogies but the situation is certainly nuts. ALLAN SUTHERLAND Stonehaven, Aberdeenshire

I THINK that we are beyond the point of doubting the capability of the Scottish Government, CMAL and Calmac to operate the West Coast’s ferry services (“Bookings gridlock after emergency ferry calamity”, The Herald, July 27). Between the delays on resolving the Rest and be Thankful landslide issues and the constant ferry failures, one would imagine that our current Scottish Government is trying to shut down all routes to the West Coast. This has left a population and businesses, already struggling with Covid problems, losing much-needed employment and income, at a point in time when rules are relaxed enough to help recovery in those sectors. To think that there is concern about the possible demise of the Gaelic language, at the rate we are going there will be such an exodus, a clearance in effect, that there will be hardly anyone there to speak it anyway. George Dale. Beith