Click the image below or text to read more:

Sir Tom Devine said it would be folly to rush towards a second referendum.
Scotland’s pre-eminent historian has indicated that he may be having second thoughts about his support for independence.
In 2014 Sir Tom Devine gave intellectual heft to the Yes campaign by coming out in favour of dissolving the Union. However, the emeritus professor at the University of Edinburgh has suggested he is weighing up his options on the country’s constitutional future.
Appearing at the Edinburgh International Book Festival, Devine, 76, was asked if it was a mistake for him to come out in favour of independence seven years ago. He sighed before responding: “You might have put your finger on something. It was a decision at the time. Whether it was a decision forever will be revealed in due course.”
He said he felt the UK government of the time would have been more willing to conduct an amicable relationship with an independent Scotland.
Addressing a suggestion that he should have remained neutral before the referendum, Devine said: “Every historian is biased. Most of the biases we have we are not aware of.”
He said he had tried to avoid writing partisan works, adding: “Even quite seasoned viewers of a right-wing or unionist bent went out of their way to say that I had tried to keep the middle way and tried to maintain impartiality. If you don’t do that, in my view, the book is valueless. It becomes a tract and a polemic and there are enough of them around.”
Earlier this year Devine suggested it would be folly to rush towards a second referendum. Writing in the pro-independence Sunday National, he said: “I strongly believe this is a time for cool heads and shrewd thinking, not knee-jerk emotional reactions.”
He added: “The people of Scotland will not necessarily support the decision of a government which attempts to offer the prospect of huge constitutional change before national recovery has been established after the long months of painful adversity.” 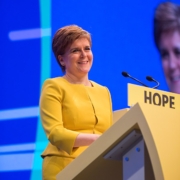