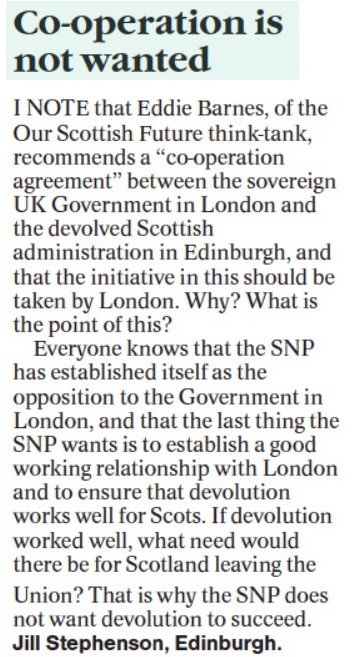 I NOTE that Eddie Barnes, of the Our Scottish Future think-tank, recommends a “co-operation agreement” between the sovereign UK Government in London and the devolved Scottish administration in Edinburgh, and that the initiative in this should be taken by London. Why? What is the point of this? Everyone knows that the SNP has established itself as the opposition to the Government in London, and that the last thing the SNP wants is to establish a good working relationship with London and to ensure that devolution works well for Scots. If devolution worked well, what need would there be for Scotland leaving the Union? That is why the SNP does not want devolution to succeed. Jill Stephenson, Edinburgh.

We are spending £1 billion on the health service over five years and giving free dental care for the under 26s, yet councils can’t open libraries, there are bin collection problems and drains have grass and weeds growing out of them. I could go on with how bad our councils are because the Scottish Government is not funding them properly. Someone has to pay for the Elbillion because it is not free -this money has to come from somewhere else. E Higgins, via email

Can someone please enlighten me as to the new meaning of the name “Green Party”? Until very recently I was under the impression it meant the Green Party cared about nature, the world’s environment and its climate, and wanted to act on that care to protect the planet and the wellbeing of people wherever they live upon it. Although the Green Party cannot be expected to save the planet and all humankind on its own, it never occurred to me that its ideals of sustainability and climate action could have political borders. Alas, Patrick Harvie and the Scottish Green Party have just confirmed by joining the SNP that their main concern is not the environment, but the gaining of political power and status for themselves. It seems to me we no longer have an environmental party in Scotland, just an expanded Scottish National Party, the sole objective of which is to create a new political border in the world. JULIA SCOTT, Roslin. Midlothian