Waiting times for fatal accident inquiries (FAIs) have jumped by more than a third since last year, according to the Scottish Conservatives.

The Crown Office and Procurator Fiscal Service (COPFS) said last year’s figures include five cases, each lasting five years, which have now concluded, and therefore the data is misleading.

But in response to a freedom of information request submitted by the Tories, COPFS data showed the average time taken to complete an FAI has risen by more than eight months, from 691 days in 2019-20 to 939 in 2020-21 – an increase of 36%.

The Tories said that in 2020-21 only two FAIs were completed within 12 months, and it took more than five years to conclude five inquiries. One inquiry from June 2012 was still open after almost a decade.

The majority of FAIs are completed between 12 and 18 months, according to the data.

Responding to the figures, Scottish Conservative shadow justice secretary Jamie Greene said: “It is unacceptable that the families of victims should have to wait so long for closure while these inquiries move at a snail’s pace.

“Fatal accident inquiries must be conducted quickly, especially when there is cause for public concern. Nine years and counting is an outrageous length of time. 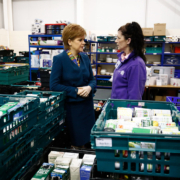