Hundreds of military personnel will be deployed to support the Scottish Ambulance Service.

The UK Government approved the support through the Military Assistance to the Civil Authority (MACA) process.

It comes after a request from the Scotland Office, working with the Scottish Government, to tackle long response times, with the ambulance service under severe pressure due to the pandemic.

Last week at Holyrood, First Minister Nicola Sturgeon announced that consideration was being given to asking for targeted military assistance to help with “short-term pressure points”.

It has now been confirmed that from Saturday, the Ministry of Defence will provide 114 people to augment ambulance drivers.

This will include drivers and support staff, who will provide resilience to the Scottish Ambulance Service by carrying out non-emergency driving work, with each being paired with a clinical professional.

A further 111 personnel will operate Mobile Testing Units, which the military previously supported in 2020.

They will be utilised to help identify infections and break chains of transmission, with their work beginning on Wednesday, September 29.

“We are working closely with the Scottish Government and Scottish Ambulance Service, following their requests for assistance with drivers and Mobile Testing Units.”

“Our Armed Forces are once again stepping up, demonstrating their versatility as we support the Covid-19 response across the UK,” he said. 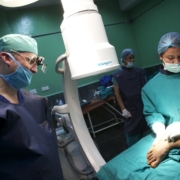 Scotland’s NHS hospital beds slashed by more than 2,000 in five years – The Sun