A mother whose daughter died at a children’s cancer ward after contracting an infection has described her child’s death as “murder”.

Kimberly Darroch told the Scottish Hospitals Inquiry she wants the children and adult hospitals at the Queen Elizabeth University Hospital (QEUH) campus in Glasgow to close.

She believes NHS Greater Glasgow and Clyde health board should be punished after she claims staff covered up the true cause of her daughter’s death, which she found out about two years later in the media.

The inquiry began hearing evidence on Monday into problems at two flagship hospitals that contributed to the deaths of two children.

It is investigating the construction of the QEUH campus in Glasgow and the Royal Hospital for Children and Young People and Department of Clinical Neurosciences in Edinburgh.

In a statement read out at the inquiry on Wednesday, Ms Darroch said she was never given details of an infection that her daughter contracted when she died, which she later discovered contributed towards her death.

Ms Darroch also claimed hospital reports about her meeting with doctors to discuss the infection were false.

Her statement said: “My view is that the hospital should be closed. I don’t think it’s safe.

“I feel like the health board need to be punished for all of this. In my eyes, what happened to my daughter is murder.

“I don’t know that I’ll ever be able to. I would never go back to the hospital, never.” 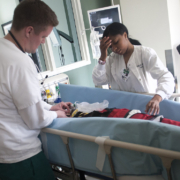 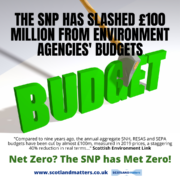 Did the SNP cover up a cancer crisis? – The Spectator

Unacceptable situation’ as 10,000 more people waiting for NHS tests since June – The Scotsman

‘This will be the end of NHS dentistry’: Warning practitioners will quit or go private in bitter funding battle with Government – The Herald

Letters to the press, 27/04/22: “One of Nicola Sturgeon’s arguments in defence of the Ferguson Ferry fiasco is that the £245 million spent in the seven years since the contract signing in 2015 saved 300 jobs. In fact, without this contract, the SNP could have used the £35m per year to employ 1,130 people on the national average wage of £31,128” 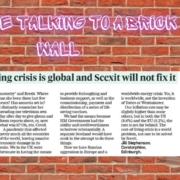