NICOLA Sturgeon’s recent “time is on my side” comment (“First Minister urged to apologise over `chilling’ allusion to Unionist voters dying”, The Herald, October 8) belies a callous, although not unexpected, attitude to what essentially amounts to the deaths of a cohort who don’t vote for her. The first time I could vote in a Holyrood election, I voted for the Scottish Socialist Party. A few years in tax-paying work, a degree, and a lecture from Tommy Sheridan was the final nail in the coffin for that brief dalliance. I was 23 when the SNP came to power. I’m now approaching my 40s. The intervening years could have been used as an attempt to wow me, to show me a glimpse of what an independent Scotland could achieve; instead, I feel underwhelmed by the almost dystopian Scotland the SNP has created. I dread to think what would happen if it ever get these “additional levers” it claims to need. Ms Sturgeon is correct, we all shuffle off the point of the demographic pyramid at some point, but how people vote and see the world in their 20s will be drastically different in their fifties. She may well have cornered the “yoof’ market, but when they end up paying tax for her welfare democracy, have had a sub-par education or can’t get a job that pays more than the minimum wage, they will vote for someone else eventually. David Bone, Girvan.

FRASER Grant (Letters, October 8) refers to the May Scottish Parliament election results and how the fact that the SNP won 62 seats as against only 11 by the other parties and says that provides a clear mandate for Indyref2. While these statistics are accurate, further examination shows that the 62 seats were won with 47.7 per cent of the total votes cast in the constituency vote. The SNP won 40.34% of the total votes cast in the regional vote and of the combined votes cast in both elements of the election the SNP won 44.02% of the total. While this shows strong support for the SNP it clearly does not demonstrate a clear mandate for Indyref2. Simply repeating the claim “we have a clear cast-iron mandate for Indyref2” does not make it become true. James Hamilton, Glasgow. 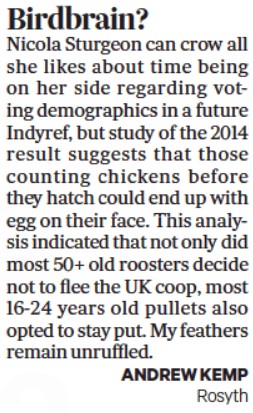 Nicola Sturgeon can crow all she likes about time being on her side regarding voting demographics in a future Indyref, but a study of the 2014 result suggests that those counting chickens before they hatch could end up with egg on their face. This analysis indicated that not only did most 50+ old roosters decide not to flee the UK coop, most 16-24 years old pullets also opted to stay put. My feathers remain unruffled. ANDREW KEMP Rosyth

Another quango won’t fix our social care crisis – Glasgow Evening T... No independence at any time – Lily of St. Leonards
Scroll to top