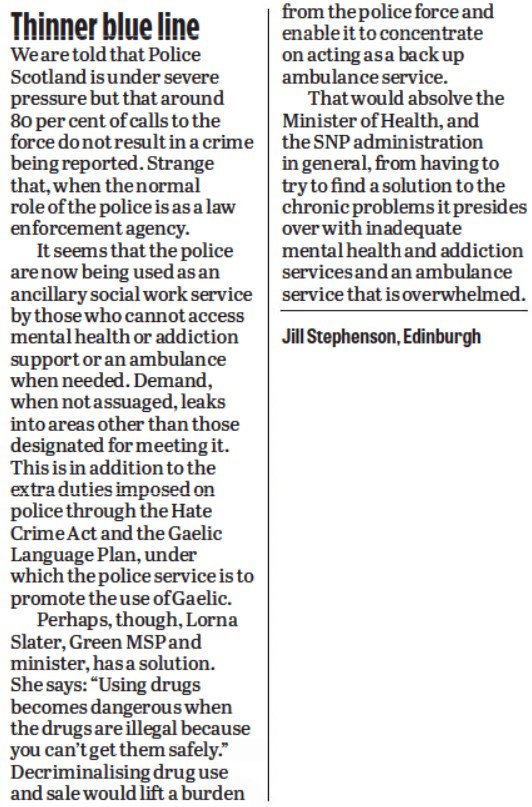 We are told that Police Scotland is under severe pressure but that around 8o per cent of calls to the force do not result in a crime being reported. Strange that when the normal role of the police is as a law enforcement agency. It seems that the police are now being used as an ancillary social work service by those who cannot access mental health or addiction support or an ambulance when needed. Demand, when not assuaged, leaks into areas other than those designated for meeting it. This is in addition to the extra duties imposed on police through the Hate Crime Act and the Gaelic Language Plan, under which the police service is to promote the use of Gaelic. Perhaps, though, Lorna Slater, Green MSP and minister, has a solution. She says: “Using drugs becomes dangerous when the drugs are illegal because you can’t get them safely.” Decriminalising drug use and sale would lift a burden from the police force and enable it to concentrate on acting as a back up ambulance service. That would absolve the Minister of Health, and the SNP administration in general, from having to try to find a solution to the chronic problems it presides over with inadequate mental health and addiction services and an ambulance service that is overwhelmed. Jill Stephenson, Edinburgh. 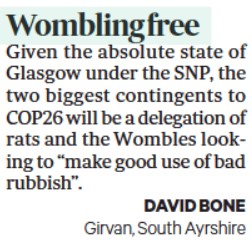 Given the absolute state of Glasgow under the SNP, the two biggest contingents to COP26 will be a delegation of rats and the Wombles looking to “make good use of bad rubbish”. DAVID BONE Girvan, South Ayrshire 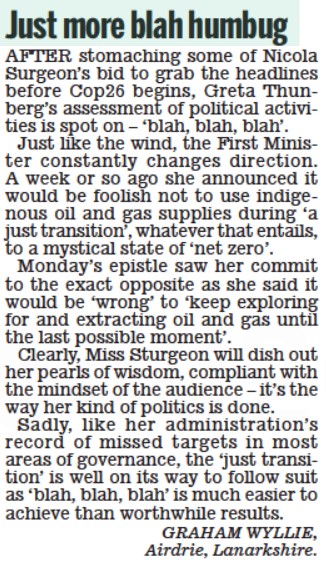 AFTER stomaching some of Nicola Surgeon’s bid to grab the headlines before Cop26 begins, Greta Thunberg’s assessment of political activities is spot-on – `blah, blah, blah’. Just like the wind, the First Minister constantly changes direction. A week or so ago she announced it would be foolish not to use indigenous oil and gas supplies during ‘a just transition’, whatever that entails, to a mystical state of ‘net zero’. Monday’s epistle saw her commit to the exact opposite as she said it would be ‘wrong’ to ‘keep exploring for and extracting oil and gas until the last possible moment’. Clearly, Miss Sturgeon will dish out her pearls of wisdom, compliant with the mindset of the audience – it’s the way her kind of politics is done. Sadly, like her administration’s record of missed targets in most areas of governance, the ‘just transition is well on its way to follow suit as `blah, blah, blah’ is much easier to achieve than worthwhile results. GRAHAM WYLLIE, Airdrie, Lanarkshire.