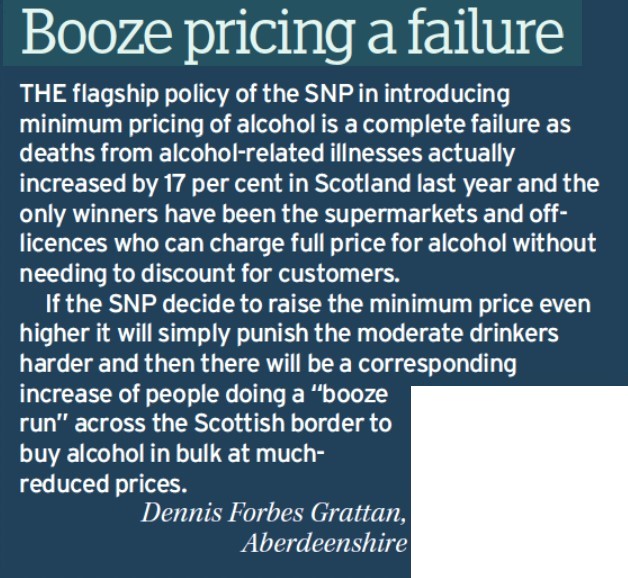 The flagship policy of the SNP in introducing minimum pricing of alcohol is a complete failure as deaths from alcohol-related illnesses actually increased by 17 per cent in Scotland last year and the only winners have been the supermarkets and off-licences who can charge full price for alcohol without needing to discount for customers. If the SNP decide to raise the minimum price even higher it will simply punish the moderate drinkers harder and then there will be a corresponding increase of people doing a “booze run” across the Scottish border to buy alcohol in bulk at much-reduced prices. Dennis Forbes Grattan, Aberdeenshire 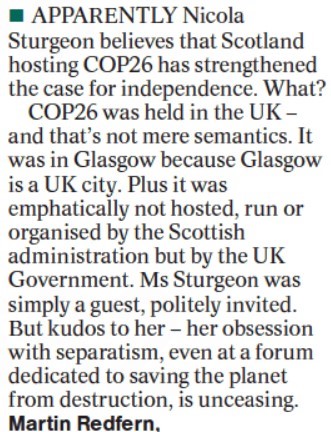 Apparently, Nicola Sturgeon believes that Scotland hosting COP26 has strengthened the case for independence. What? COP26 was held in the UK -and that’s not mere semantics. It was in Glasgow because Glasgow is a UK city. Plus it was emphatically not hosted, run or organised by the Scottish administration but by the UK Government. Ms Sturgeon was simply a guest, politely invited. But kudos to her – her obsession with separatism, even at a forum dedicated to saving the planet from destruction, is unceasing. Martin Redfern.

The SNP has never really got over its defeat in the 2014 referendum. It is certainly worth noting that in the most recent Holyrood elections the number of votes cast for the SNP amounted to 2,385,788, while the Conservative/ Labour/Liberal Democrat voters added up to 2,624,825. In percentage terms, this is roughly a ratio of 47.6/52.4, which is very dose to the results in the independence referendum. So, one can only conclude that nothing really much has changed – the majority of Scots still wish to remain in the UK. The recent agreement on the part of the SNP to come to a deal with the largely unelected Scottish Greens merely leads to a greater impasse, rather than any political advantage. One could well suggest that this is just another attempt by the SNP to try to undermine the sound economy and political leadership of these islands. Scotland’s future will be far safer politically, and economically if it continues as a constituent part of the UK. Robert IG Scott, Ceres, Fife.