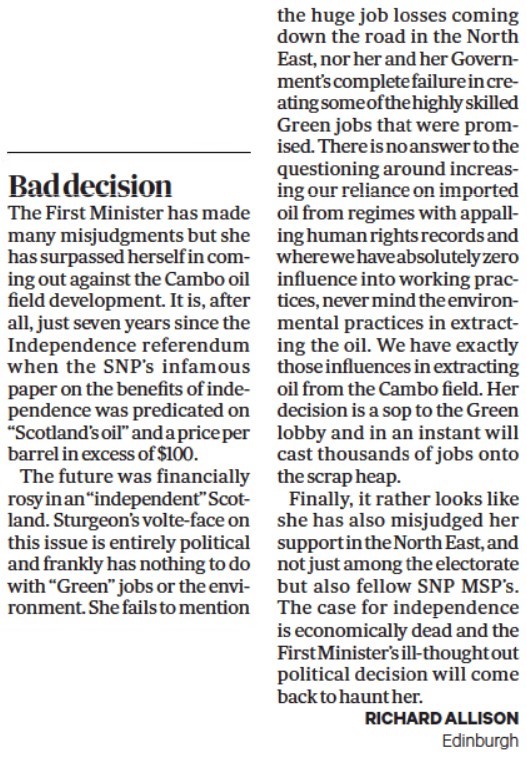 The First Minister has made many misjudgments but she has surpassed herself in coming out against the Cambo oil field development. It is, after all, just seven years since the Independence referendum when the SNP’s infamous paper on the benefits of independence was predicated on “Scotland’s oil” and a price per barrel in excess of $100. The future was financially rosy in an “independent” Scotland. Sturgeon’s volte-face on this issue is entirely political and frankly has nothing to do with “Green” jobs or the environment She fails to mention the huge job losses coming down the road in the North East, nor her and her Governments complete failure in creating some of the highly skilled Green jobs that were promised. There is no answer to the questioning around increasing our reliance on imported oil from regimes with appalling human rights records and where we have absolutely zero influence on working practices, never mind the environmental practices in extracting the oil. We have exactly those influences in extracting oil from the Cambo field. Her decision is a sop to the Green lobby and in an instant will cast thousands of jobs onto the scrap heap. Finally, it rather looks like she has also misjudged her support in the North East, and not just among the electorate but also fellow SNP MSP’s. The case for independence is economically dead and the first minister’s ill-thought-out political decision will come back to haunt her. RICHARD ALLISON, Edinburgh 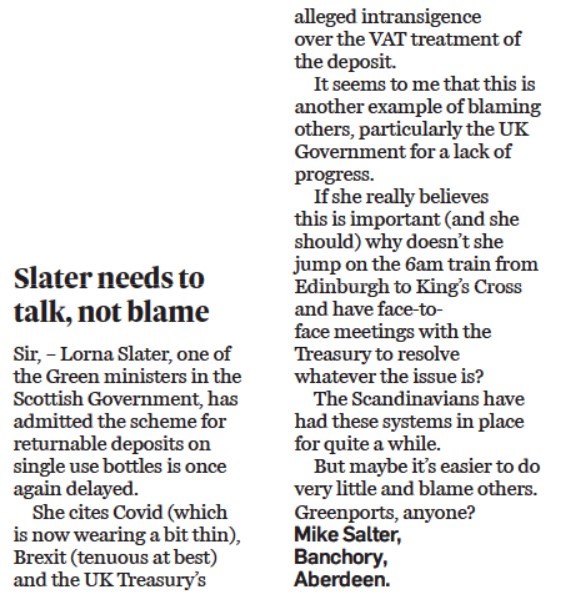 Lorna Slater, one of the Green ministers in the Scottish Government, has admitted the scheme for returnable deposits on single-use bottles is once again delayed. She cites Covid (which is now wearing a bit thin), Brexit (tenuous at best) and the UK Treasury’s alleged intransigence over the VAT treatment of the deposit. It seems to me that this is another example of blaming others, particularly the UK Government for a lack of progress. If she really believes this is important (and she should) why doesn’t she jump on the 6 am train from Edinburgh to King’s Cross and have face-to-face meetings with the Treasury to resolve whatever the issue is? The Scandinavians have had these systems in place for quite a while But maybe it’s easier to do very little and blame others. Greenport’s, anyone? Mike Salter, Banchory, Aberdeen. 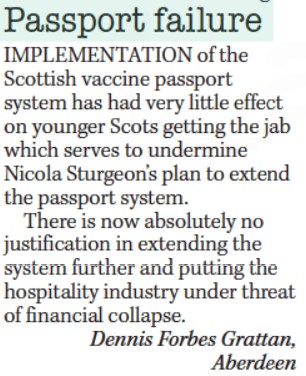 Implementation of the Scottish vaccine passport system has had very little effect on younger Scots getting the jab which serves to undermine Nicola Sturgeon’s plan to extend the passport system. There is now absolutely no justification in extending the system further and putting the hospitality industry under threat of financial collapse. Dennis Forbes Grattan, Aberdeen