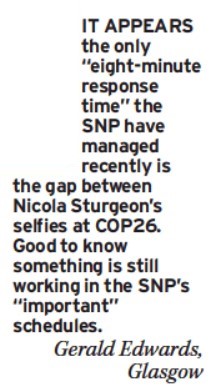 It appears the only “eight-minute response time” the SNP have managed recently is the gap between Nicola Sturgeon’s selfies at COP26. Good to know something is still working in the SNP’s “important” schedules. Gerald Edwards, Glasgow

We can now see how the trajectory of Scottish separatism has risen and fallen. There was no mass support for it before the discovery of North Sea oil in the late 1960s, but the prospect of untold riches in British waters was hijacked by the SNP with the slogan: ‘It’s Scotland’s oil.’ By the time the SNP was capitalising on this, from the 1990s, the years of peak oil were past. As the economist, David Smith said in 2019, the SNP’s separatist campaign is 40 years too late. Now, Nicola Sturgeon has confirmed that by opposing the development of the Cambo oil field, so accepting we will buy oil and gas from foreign suppliers because we are too fastidious to use our own. No wonder Alex Salmond is outraged. His own secession campaign in 2014 was based firmly on the annual billions that oil would bring in, he said, with oil priced at around £110 per barrel. No doubt Miss Sturgeon is playing a game to keep her own hands clean while leaving it to the Prime Minister to give Cambo the go-ahead to save thousands of jobs in North-East Scotland. You can be sure she will be standing ready to take credit for that. But it is clear oil will never again be the ‘bonus’ Salmond claimed it would be, nor yet the basis of another separatist campaign that the Growth Commission’s Andrew Wilson said it was in 2014. Without oil wealth – and surrendering on secession the £2,000-plus per head per year Scots receive from HM Treasury – what on earth will the SNP’s separate Scotland be built on? Telling us that we have plenty of resources and talent does not cut the mustard. It is simply an alibi for the absence of an economic and financial plan for secession. JILL STEPHENSON, Edinburgh. 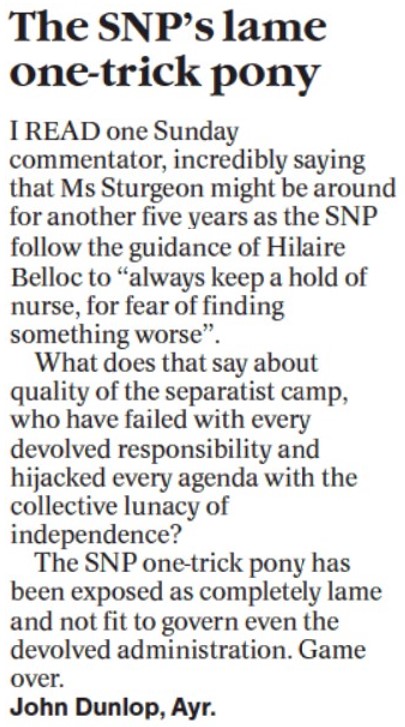 I read one Sunday commentator, incredibly saying that Ms Sturgeon might be around for another five years as the SNP follow the guidance of Hilaire Belloc to “always keep a hold of nurse, for fear of finding something worse”. What does that say about the quality of the separatist camp, who have failed with every devolved responsibility and hijacked every agenda with the collective lunacy of independence? The SNP one-trick pony has been exposed as completely lame and not fit to govern even the devolved administration. Game over. John Dunlop, Ayr.