Rosemary Goring (“Let’s hope Nicola Sturgeon stays on as First Minister – for all our sakes”, November, 24) has obviously been living in a vastly different Scotland to me since 2014. She is lauding Nicola Sturgeon as some sort of top world leader who Scotland needs “for all our sakes”. The only aspect of failure for the First Minister according to Ms Goring has been in education, which has been “underwhelming … and woefully lacking”. The majority of Scots will wholeheartedly agree – but education is not the only failure for Ms Sturgeon. There has been failure after failure, far too many to list here, all apparently forgotten about during Covid. Ms Goring needs to remember that in virtually every election in Scotland since 2014, local and Holyrood, pro-Union votes outnumber pro-separatist votes and, come another referendum, given current statistics, the same will apply. Nicola Sturgeon is fully aware of this, hence her desire to deny supporters a vote and maintain her lucrative tenure for as long as possible. Just a pity that supporters are so gullible. Douglas Cowe, Newmachar, Aberdeenshire. 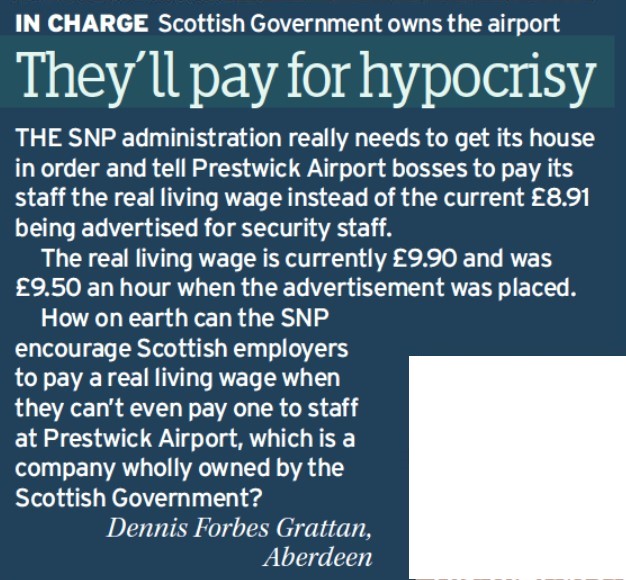 THE SNP administration really needs to get its house in order and tell Prestwick Airport bosses to pay its staff the real living wage instead of the current £8.91 being advertised for security staff. The real living wage is currently £9.90 and was £9.50 an hour when the advertisement was placed. How on earth can the SNP encourage Scottish employers to pay a real living wage when they can’t even pay staff at Prestwick Airport, which is a company wholly owned by the Scottish Government? Dennis Forbes Grattan, Aberdeen