Kate Forbes’ Budget reveals just how precarious Scotland’s finances actually are (your report, 10 December). As the handouts continue the revenue dries up. This is unsustainable. To compound this folly, Nicola Sturgeon’s attitude to the Cambo oil field is having major repercussions. In essence, the prospect of Scotland going its own way has been dealt a major blow by the very people suggesting independence. The surge of the omicron variant has highlighted the need for Westminster support. Sturgeon now finds herself needing, again, to backtrack on her “promise of indyref2 by 2023. It is downhill all the way from here. Gerald Edwards, Glasgow.

Through our website and newsletter, we have reached almost 275,000 people since 2019.

Our billboards and press adverts during the last Holyrood election were viewed by over a million people.

Please donate to our Crowdfunder, to keep us fighting the nats, by clicking on the image to the right. No sum is too small. Thank you.

In November 2020, John Swinney promised that the SNP would make free school meals “universal to all pupils” by August 2022. His only proviso was that his party was elected at the then-upcoming election. They were duly elected. Now, in December 2021, an official Budget document reveals that the SNP/Green administration would not fulfil the pledge to pupils in P4 and P5. These kids, and pupils in P6 and P7, will have to wait until later”. Looks like “long grass later”. So much for the boast that the SNP would make Scotland the first country in the world to offer free meals to all pupils. It seems that this pledge has joined the”18-maximum class sizes” and “banishment of council tax” and many other pledges in the dustbin of SNP history. Notably, while this cut back in spending on our children is going on, the same Budget can find no problem providing a very large increase in the shadow – also known as pretend – Scottish-embassies” overseas. Alexander McKay, Edinburgh 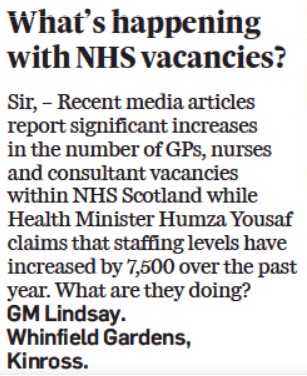 Recent media articles report significant increases in the number of GPs, nurses and consultant vacancies within NHS Scotland while Health Minister Humza Yousaf claims that staffing levels have increased by 7,500 over the past year. What are they doing? GM Lindsay. Whinfield Gardens, Kinross.