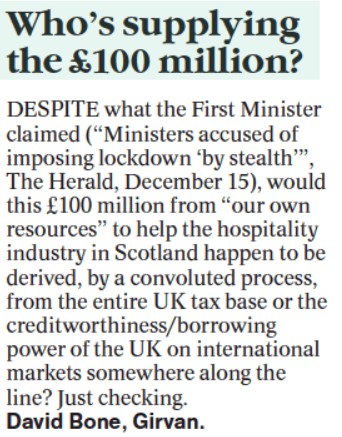 Despite what the First Minister claimed (“Ministers accused of imposing lockdown ‘by stealth’, The Herald, December 15), would this £100 million from “our own resources” to help the hospitality industry in Scotland happen to be derived, by a convoluted process, from the entire UK tax base or the creditworthiness/borrowing power of the UK on international markets somewhere along the line? Just checking. David Bone, Girvan.

Year after year, I remember the words of Nicola Sturgeon when she became First Minister: “Let me be clear – I want to be judged on this. If you are not, as First Minister, prepared to put your neck on the line on the education of our young people then what are you prepared to? It really matters.” She staked her personal reputation on dosing the school attainment gap between rich and poor areas in Scotland. She has failed our future generations by not closing the attainment gap. She has, in fact, actually increased the gap (“Scotland’s school’s attainment gap widens to record high level”, The Herald, December 15). Covid can’t be used as an excuse, as the gap was not closing before the pandemic. It has widened in four of the last five years. She needs to stop making excuses and live up to her statement. Yet year after year the statistics show she has failed and her personal reputation is in tatters. Having said she was prepared to put her neck on the line, why has she not resigned? Jane Lax, Aberlour. 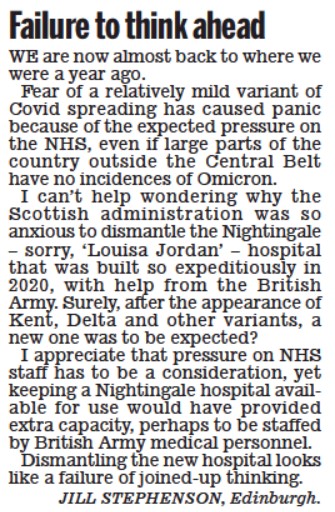 We are now almost back to where we were a year ago. Fear of a relatively mild variant of Covid spreading has caused panic because of the expected pressure on the NHS, even if large parts of the country outside the Central Belt have no incidences of Omicron. I can’t help wondering why the Scottish administration was so anxious to dismantle the Nightingale – sorry, ‘Louisa Jordan’ – hospital that was built so expeditiously in 2020, with help from the British Army. Surely, after the appearance of Kent, Delta and other variants, a new one was to be expected? I appreciate that pressure on NHS staff has to be a consideration, yet keeping a Nightingale hospital available for use would have provided extra capacity, perhaps to be staffed by British Army medical personnel. Dismantling the new hospital looks like a failure of joined-up thinking. Jill Stephenson, Edinburgh.

NHS Dumfries & Galloway is under pressure and the SNP is to blame –... Additional military deployed to support Scotland’s vaccine rollout –...
Scroll to top