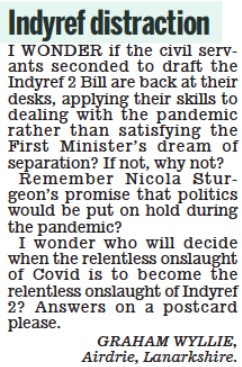 I wonder if the civil servants seconded to draft the Indyref 2 Bill are back at their desks, applying their skills to dealing with the pandemic rather than satisfying the First Minister’s dream of separation? If not, why not? Remember Nicola Sturgeon’s promise that politics would be put on hold during the pandemic? I wonder who will decide when the relentless onslaught of Covid is to become the relentless onslaught of Indyref 2? Answers on a postcard, please.
Graham Wyllie, Airdrie, Lanarkshire. 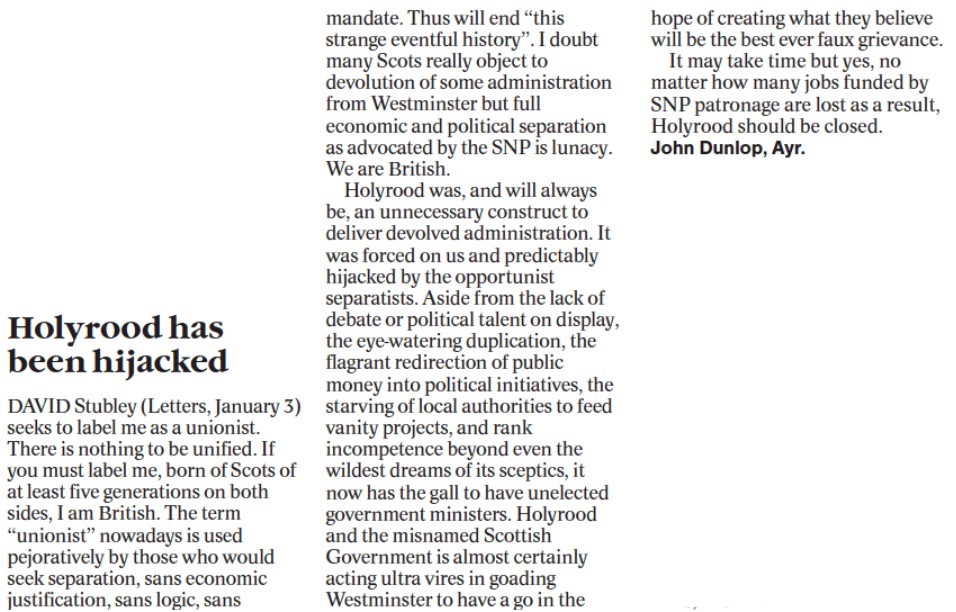 David Stubley (Letters, January 3) seeks to label me as a unionist. There is nothing to be unified. If you must label me, born of Scots of at least five generations on both sides, I am British. The term “unionist” nowadays is used pejoratively by those who would seek separation, sans economic justification, sans logic, sans mandate. Thus will end “this strange eventful history”. I doubt many Scots really object to devolution of some administration from Westminster but full economic and political separation as advocated by the SNP is lunacy. We are British. Holyrood was, and will always be, an unnecessary construct to deliver devolved administration. It was forced on us and predictably hijacked by the opportunist separatists. Aside from the lack of debate or political talent on display, the eye-watering duplication, the flagrant redirection of public money into political initiatives, the starving of local authorities to feed vanity projects, and rank incompetence beyond even the wildest dreams of its sceptics, it now has the gall to have unelected government ministers. Holyrood and the misnamed Scottish Government is almost certainly acting ultra vires in goading Westminster to have a go in the hope of creating what they believe will be the best ever faux grievance. It may take time but yes, no matter how many jobs funded by SNP patronage are lost as a result, Holyrood should be closed. John Dunlop, Ayr. 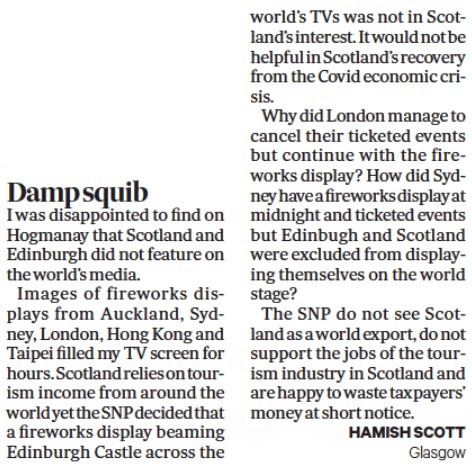 I was disappointed to find on Hogmanay that Scotland and Edinburgh did not feature on the world’s media. Images of fireworks displays from Auckland, Sydney, London, Hong Kong and Taipei filled my TV screen for hours. Scotland relies on tourism income from around the world yet the SNPdecided that a fireworks display beaming Edinburgh Castle across the world’s TVs was not in Scotland’s interest It would not be helpful in Scotland’s recovery from the Covid economic crisis. Why did London manage to cancel their ticketed events but continue with the fireworks display? How did Sydney have a fireworks display at midnight and ticketed events but Edinburgh and Scotland were excluded from displaying themselves on the world stage? The SNP do not see Scotland as a world export, do not support the jobs of the tourism industry in Scotland and are happy to waste taxpayers money at short notice. Hamish Scott, Glasgow.