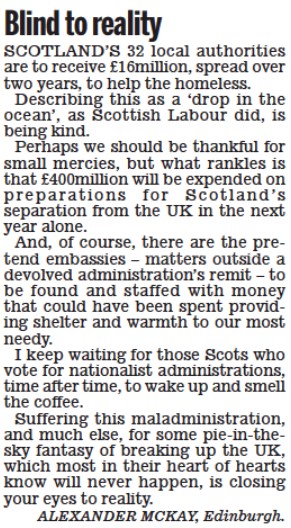 Scotland’s 32 local authorities are to receive £16 million, spread over two years, to help the homeless. Describing this as a ‘drop in the ocean’, as Scottish Labour did, is being kind. Perhaps we should be thankful for small mercies, but what rankles is that £400million will be expended on preparations for Scotland’s separation from the UK in the next year alone. And, of course, there are the pretend embassies – matters outside a devolved administration’s remit – to be found and staffed with money that could have been spent providing shelter and warmth to our most needy. I keep waiting for those Scots who vote for nationalist administrations, time after time, to wake up and smell the coffee. Suffering this maladministration, and much else, for some pie-in-the-sky fantasy of breaking up the UK, which most in their heart of hearts know will never happen, is closing your eyes to reality. Alexander McKay, Edinburgh.

A great Christmas and New Year period. I never saw or heard Sturgeon once. Can I have the same for the rest of the year? William Howatson, Linlithgow, West Lothian.

The SNP’s claim that Scots pay and average £840 a year less in taxes and statutory charges than our counterparts in the rest of the UK (Scotsman, 4 January) is a revelation. MSP Rona Mackay is not slow to praise the policies of the SNP for this benefit. It’s, therefore, a bit puzzling as to why we still suffer from a high degree of child poverty and fuel poverty and see many struggle to pay the fewer and lower bills that our impoverished cousins have to live with. Unfortunately, I imagine there will be some levelling of bills when councils are forced to raise local taxation to cope with their budget “increase” that the Finance Minister insists she gave them. The SNP and finance are uneasy bedfellows and, given that there are local elections in the offing, I can only surmise that 2022 will see a tsunami (to use a phrase) of inverse propaganda. Why am I reminded of the phrase attributed to the past master of propaganda, Joseph Goebbels, who once said that if you repeat a lie often enough it becomes the truth? Ken Currie, Edinburgh

More than 7000 physical attacks on NHS Scotland staff in past year – STV... Almost nine out of ten teachers report higher workload during pandemic –...
Scroll to top