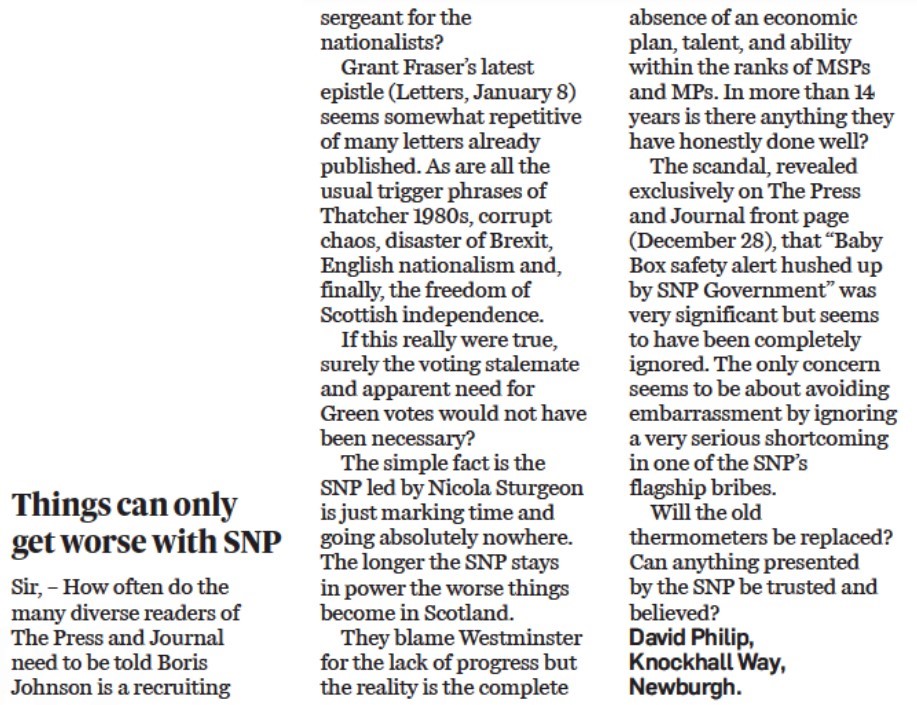 How often do the many diverse readers of The Press and Journal need to be told Boris Johnson is a recruiting sergeant for the nationalists? Grant Fraser’s latest epistle (Letters, January 8) seems somewhat repetitive of many letters already published. As are all the usual trigger phrases of Thatcher 1980s, corrupt chaos, disaster of Brexit, English nationalism and, finally, the freedom of Scottish independence. If this really were true, surely the voting stalemate and apparent need for Green votes would not have been necessary? The simple fact is the SNP led by Nicola Sturgeon is just marking time and going absolutely nowhere. The longer the SNP stays in power the worse things become in Scotland. They blame Westminster for the lack of progress but the reality is the complete absence of an economic plan, talent, and ability within the ranks of MSPs and MPs. In more than 14 years is there anything they have honestly done well? The scandal, revealed exclusively on The Press and Journal front page (December 28), that “Baby Box safety alert hushed up by SNP Government” was very significant but seems to have been completely ignored. The only concern seems to be about avoiding embarrassment by ignoring a very serious shortcoming in one of the SNP’s flagship bribes. Will the old thermometers be replaced? Can anything presented by the SNP be trusted and believed? David Philip, Knockhall Way, Newburgh.

I can think of nothing more irritating and pointless than another discussion about whether we should have devo-max in Scotland (Scotsman. 6 January) and opposition politicians in Holyrood should not get pulled into this. After the referendum vote in 2014. politicians of all parties represented at Holyrood got together to negotiate a new package of powers for Scotland and all of these have since been enacted. It follows therefore that the powers that we have got should be agreeable to almost 100 per cent of the electorate and political establishment. That many of these powers have never been used to any significant extent tells you what you need to know about the SNP. They want power. but not responsibility. In addition, if all financial decisions are devolved to Holyrood, then we are effectively turning our back on the single biggest advantage that the Union gives us, namely, the benefit of being part of a much bigger and stronger economic unit. The Covid pandemic has proven that finally, devo-max is usually thought to be the devolution of all powers except for foreign affairs and defence. Did the SNP accept the Brexit vote taken at a UK level? No. If we did have to take military action somewhere. would they accept that? No. The suggestion that the SNP would respect any powers left at a UK level is for the birds. We don’t need the naive appeasement that is discussion around devo-max. Victor Clements, Aberfeldy. 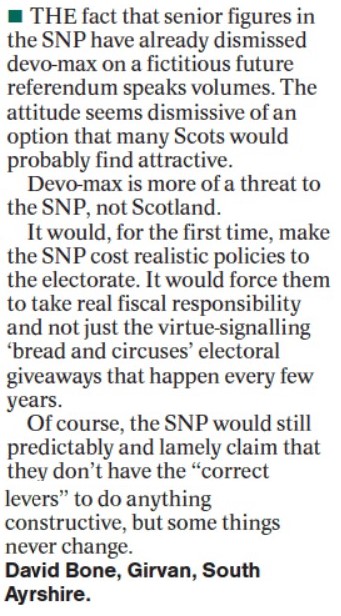 The fact that senior figures in the SNP have already dismissed devo-max on a fictitious future referendum speaks volumes. The attitude seems dismissive of an option that many Scots would probably find attractive. Devo-max is more of a threat to the SNP, not Scotland. It would, for the first time, make the SNP cost realistic policies to the electorate. It would force them to take real fiscal responsibility and not just the virtue-signalling `bread and circuses’ electoral giveaways that happen every few years. Of course, the SNP would still predictably and lamely claim that they don’t have the “correct levers” to do anything constructive, but some things never change. David Bone, Girvan, South Ayrshire.

What role can Scotland play in the UK hydrogen economy? – Scottish Affairs... Sour, dour and obsessed with power – Stephen Daisley
Scroll to top