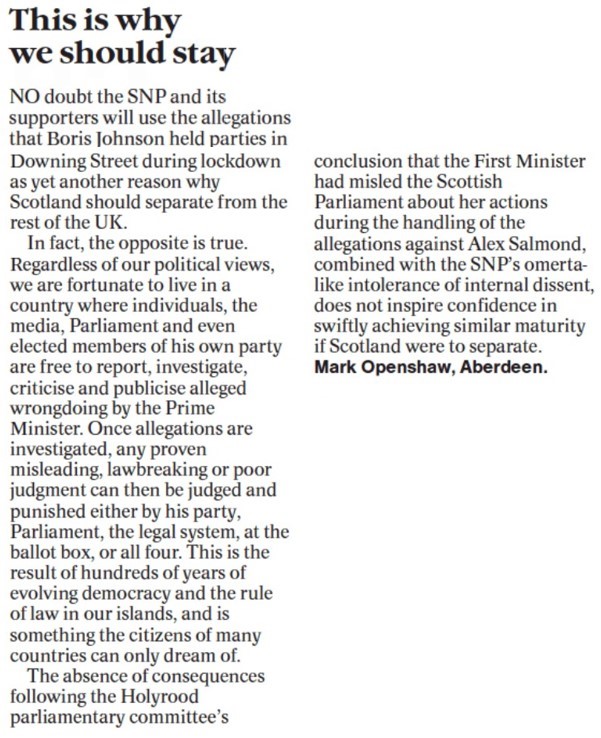 No doubt the SNP and its supporters will use the allegations that Boris Johnson held parties in Downing Street during lockdown as yet another reason why Scotland should separate from the rest of the UK. In fact, the opposite is true. Regardless of our political views, we are fortunate to live in a country where individuals, the media, Parliament and even elected members of his own party are free to report, investigate, criticise and publicise alleged wrongdoing by the Prime Minister. Once allegations are investigated, any proven misleading, lawbreaking or poor judgment can then be judged and punished either by his party, Parliament, the legal system, at the ballot box, or all four. This is the result of hundreds of years of evolving democracy and the rule of law in our islands, and is something the citizens of many countries can only dream of. The absence of consequences following the Holyrood parliamentary committee’s conclusion that the First Minister had misled the Scottish Parliament about her actions during the handling of the allegations against Alex Salmond, combined with the SNP’s omerta-like intolerance of internal dissent, does not inspire confidence in swiftly achieving similar maturity if Scotland were to separate. Mark Openshaw, Aberdeen. 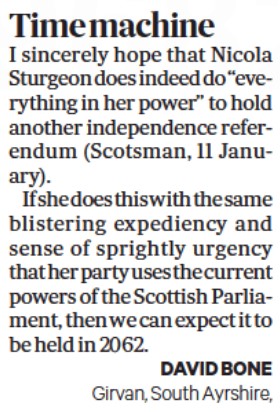 I sincerely hope that Nicola Sturgeon does indeed do “everything in her power” to hold another independence referendum (Scotsman, 11 January). If she does this with the same blistering expediency and sense of sprightly urgency that her party uses the current powers of the Scottish Parliament, then we can expect it to be held in 2062. David Bone, Girvan, South Ayrshire. 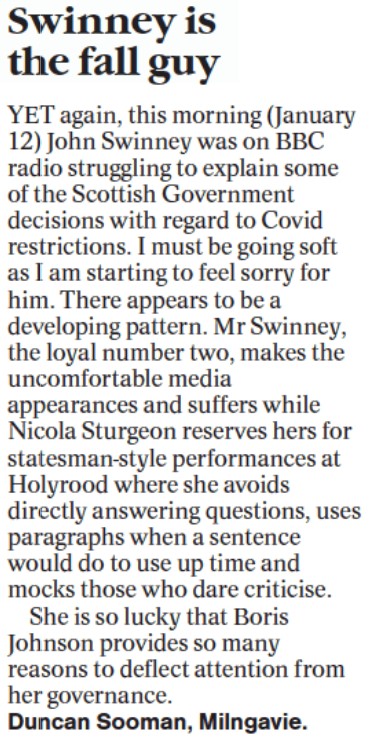 Yet again, this morning (January 12) John Swinney was on BBC radio struggling to explain some of the Scottish Government decisions with regard to Covid restrictions. I must be going soft as I am starting to feel sorry for him. There appears to be a developing pattern. Mr Swinney, the loyal number two, makes the uncomfortable media appearances and suffers while Nicola Sturgeon reserves hers for statesman-style performances at Holyrood where she avoids directly answering questions, uses paragraphs when a sentence would do to use up time and mocks those who dare criticise. She is so lucky that Boris Johnson provides so many reasons to deflect attention from her governance. Duncan Sooman, Milngavie.

Proposed legal reforms ‘amount to interference with rule of law’ –...