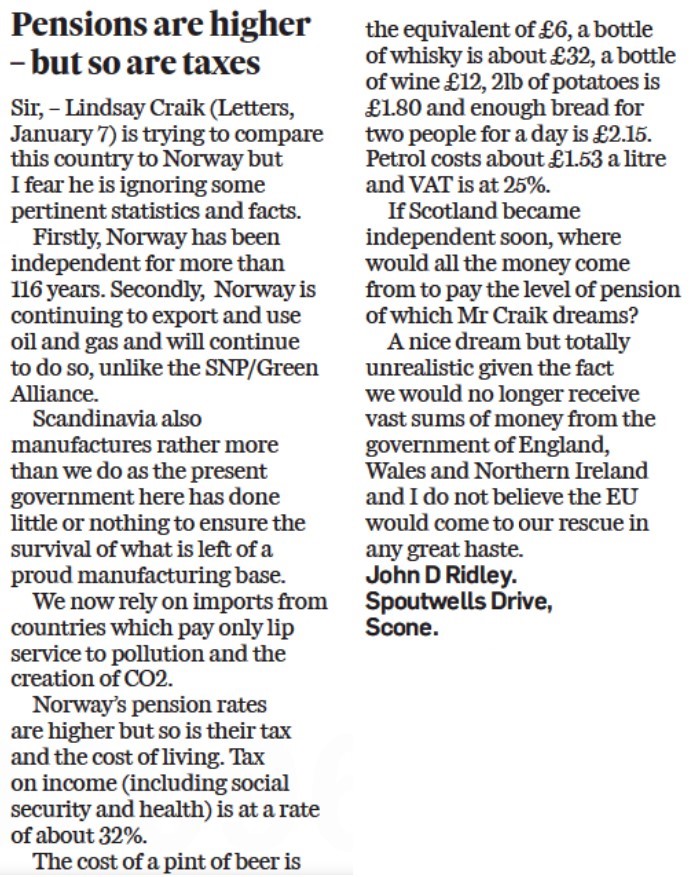 Lindsay Craik (Letters, January 7) is trying to compare this country to Norway but I fear he is ignoring some pertinent statistics and facts. Firstly, Norway has been independent for more than 116 years. Secondly, Norway is continuing to export and use oil and gas and will continue to do so, unlike the SNP/Green Alliance. Scandinavia also manufactures rather more than we do as the present government here has done little or nothing to ensure the survival of what is left of a proud manufacturing base. We now rely on imports from countries which pay only lip service to pollution and the creation of CO2. Norway’s pension rates are higher but so is their tax and the cost of living. Tax on income (including social security and health) is at a rate of about 32%. The cost of a pint of beer is the equivalent of £6, a bottle of whisky is about £32, a bottle of wine £12, 21b of potatoes is £1.80 and enough bread for two people for a day is £2.15. Petrol costs about £1.53 a litre and VAT is at 25%. If Scotland became independent soon, where would all the money come from to pay the level of pension of which Mr Craik dreams? A nice dream but totally unrealistic given the fact we would no longer receive vast sums of money from the government of England, Wales and Northern Ireland and I do not believe the EU would come to our rescue in any great haste. John D Ridley. Spoutwells Drive, Scone. 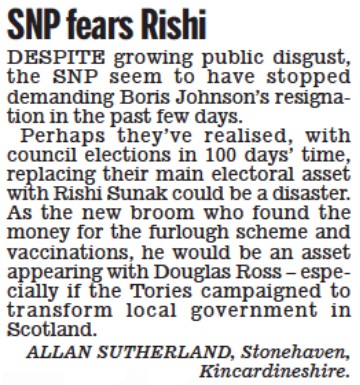 Despite growing public disgust, the SNP seem to have stopped demanding Boris Johnson’s resignation in the past few days. Perhaps they’ve realised, with council elections in 100 days’ time, replacing their main electoral asset with Rishi Sunak could be a disaster. As the new broom who found the money for the furlough scheme and vaccinations, he would be an asset appearing with Douglas Ross – especially if the Tories campaigned to transform local government in Scotland. Allan Sutherland, Stonehaven, Kincardineshire. 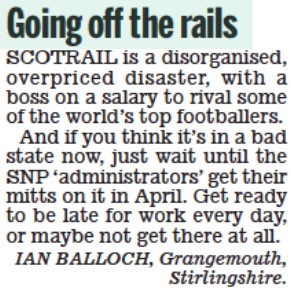 Scotrail is a disorganised, overpriced disaster, with a boss on a salary to rival some of the world’s top footballers. And if you think it’s in a bad state now, just wait until the SNP ‘administrators’ get their mitts on it in April. Get ready to be late for work every day, or maybe not get there at all. Ian Balloch, Grangemouth, Stirlingshire.