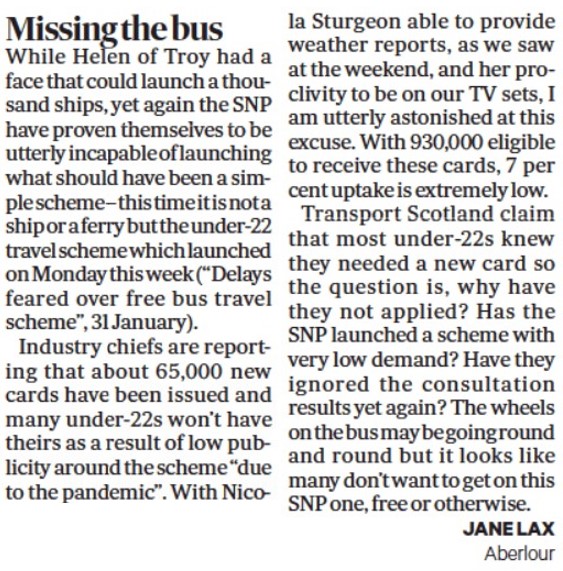 While Helen of Troy had a face that could launch a thousand ships, yet again the SNP have proven themselves to be utterly incapable of launching what should have been a simple scheme – this time it is not a ship or a ferry but the under-22 travel scheme which launched on Monday this week (“Delays feared over free bus travel scheme”, 31 January). Industry chiefs are reporting that about 65,000 new cards have been issued and many under-22s won’t have theirs as a result of low publicity around the scheme “due to the pandemic”. With Nicola Sturgeon able to provide weather reports, as we saw at the weekend, and her proclivity to be on our TV sets, I am utterly astonished at this excuse. With 930,000 eligible to receive these cards, 7 per cent uptake is extremely low. Transport Scotland claim that most under-22s knew they needed a new card so the question is, why have they not applied? Has the SNP launched a scheme with very low demand? Have they ignored the consultation results yet again? The wheels on the bus may be going round and round but it looks like many don’t want to get on this SNP one, free or otherwise. Jane Lax, Aberlour.

Sir, – The first duty of government is the safety and protection of its people. Therefore it is utterly irresponsible of Nicola Sturgeon to propose an independence referendum while Mr Putin is in power in Russia. As well as the situation in Ukraine he is becoming ever more belligerent towards us with constant incursions in the North Sea by submarines, warships and military aircraft. Scotland out of the UK, and consequently out of Nato, would be completely defenceless. It is reckless beyond belief that the SNP can seriously propose putting our country in such a position. Dr Richard Marsh, Bellabeg House, Strathdon.

The current debacle resulting from the new law requiring all households to install linked-up alarms shows why all of Scotland should be worried by the SNP’s apparent hostility towards the North Sea oil and gas industry Their interpretation of a “just transition” from hydrocarbon-based to “green”, is not just a threat to jobs and the local economy of the northeast. Though the two issues appear unrelated, there are important similarities in that both require money, time, raw materials, manufactured products and equipment installation. The law was originally to come into effect in February 2021 but was delayed a year due to Covid. An inadequate public awareness campaign, shortages of material, import lead time and installation competence followed. As the new deadline approached it was apparent we were still a long way from compliance. This prompted the government to issue vague assurances that this will not result in prosecution – leaving householders to worry about whether insurers will payout in the event of a fire-damage claim for a non-compliant property. The government had misjudged the complexity of implementing even a modest change within a self-imposed deadline. Absurd as this failure is, its scale and consequences are negligible compared to failing to achieve energy transition before current domestic supplies deplete, leaving us increasingly hostage to imports. The effort and resources needed for Scotland’s smoke alarms were minuscule compared to the monumental worldwide competition for the raw materials (including oil and gas), finance, expertise and hardware that will be required to achieve net-zero. The SNP’s lack of joined-up thinking on joined-up alarms, coupled with multiple failures and overruns on projects ranging from new ferries to bottle deposit schemes, should set alarm bells ringing across the country. Mark Openshaw, EarLswells Road, Aberdeen.