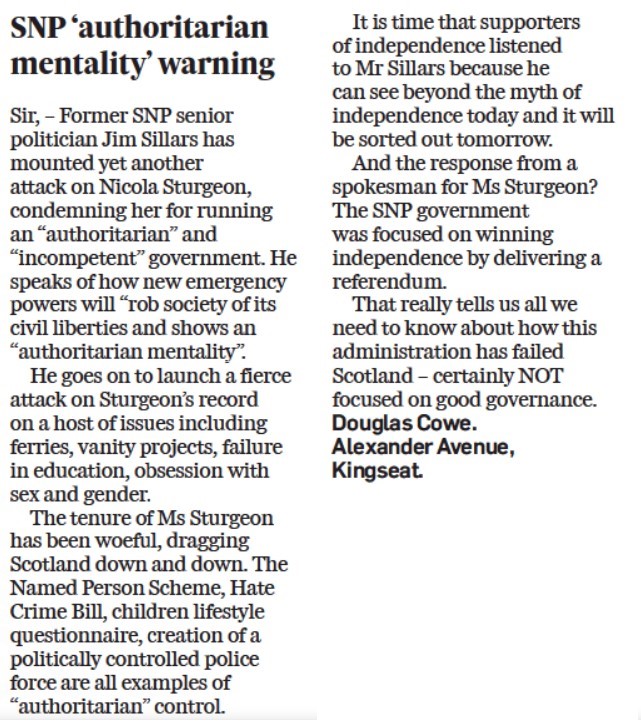 Former SNP senior politician Jim Siliars has mounted yet another attack on Nicola Sturgeon, condemning her for running an “authoritarian” and “incompetent” government. He speaks of how new emergency powers will “rob society of its civil liberties and shows an “authoritarian mentality”. He goes on to launch a fierce attack on Sturgeon’s record on a host of issues including ferries, vanity projects, failure in education, obsession with sex and gender. The tenure of Ms Sturgeon has been woeful, dragging Scotland down and down. The Named Person Scheme, Hate Crime Bill, children lifestyle questionnaire, creation of a politically controlled police force are all examples of “authoritarian” control. It is time that supporters of independence listened to Mr Sillars because he can see beyond the myth of independence today and it will be sorted out tomorrow. And the response from a spokesman for Ms Sturgeon? The SNP government was focused on winning independence by delivering a referendum. That really tells us all we need to know about how this administration has failed Scotland – certainly NOT focused on good governance. Douglas Cowe, Alexander Avenue, Kingseat. 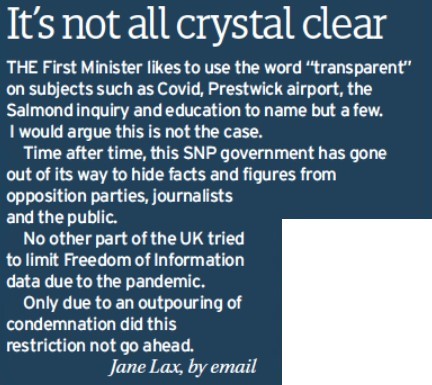 The First Minister likes to use the word “transparent” on subjects such as Covid, Prestwick airport, the Salmond inquiry and education to name but a few. I would argue this is not the case. Time after time, this SNP government has gone out of its way to hide fads and figures from opposition parties, journalists and the public. No other part of the UK tried to limit Freedom of Information data due to the pandemic. Only due to an outpouring of condemnation did this restriction not go ahead. Jane Lax, by email

Doubting Despite recent announcements from First Minister Nicola Sturgeon as to when Indyref 2 might be held, I wonder when she will admit that she doesn’t really want either Indyref 2 or indeed, independence. If another referendum is held and the result is the same as the last one then the First Minister’s political career, at least in Scotland, is likely to be over. She may of course have already lined up an attractive alternative position, perhaps in the EU, given her enthusiasm for Scotland to join it. A vote for independence would also be undesirable for the First Minister as she must be aware that it will have disastrous implications for Scotland’s economy. The Scottish Government would then be under pressure to run the country efficiently without financial support from the UK Government and without being able to blame others at every turn when something inevitably goes wrong. Far better to continue pandering to the SNP faithful by promising Indyref 2 within some indefinite timescale and continue a policy of grievance towards the UK Government. Gordon Lawson, Domoch, Sutherland. 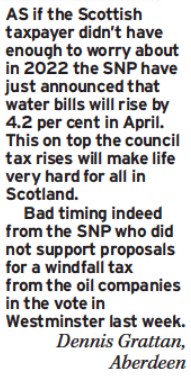 As if the Scottish taxpayer didn’t have enough to worry about in 2022 the SNP have just announced that water bills will rise by 4.2 per cent in April. This on top the council tax rises will make life very hard for all in Scotland. Bad timing indeed from the SNP who did not support proposals for a windfall tax from the oil companies in the vote in Westminster last week. Dennis Grattan. Aberdeen.

Sturgeon’s claim about Scottish pensions is utter nonsense – and she knows...

Litter branded a ‘disgrace’ after a tonne of rubbish cleaned up –...
Scroll to top