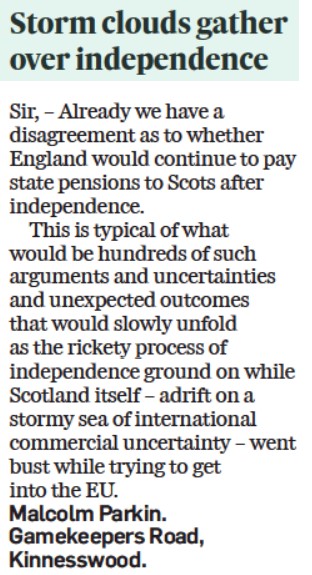 Already we have a disagreement as to whether England would continue to pay state pensions to Scots after independence. This is typical of what would be hundreds of such arguments and uncertainties and unexpected outcomes that would slowly unfold as the rickety process of independence ground on while Scotland itself – adrift on a stormy sea of international commercial uncertainty – went bust while trying to get into the EU. Malcolm Parkin. Gamekeepers Road, Kinnesswood.

You need to have paid 35 years of contributions to get the full UK pension of £179.60 a week. You have no entitlement until you have paid in for 10 years. This means at the date of independence most people under 30 would have no entitlement to a UK pension and under-40s who’d paid in for 20 years would have ten years’ entitlement, around £50 per week. The Scottish Government has committed to honouring current UK entitlements, so my advice to their target younger voters is… be careful what you wish for, whichever government will actually be paying for it. Allan Sutherland, Stonehaven, Aberdeenshire. 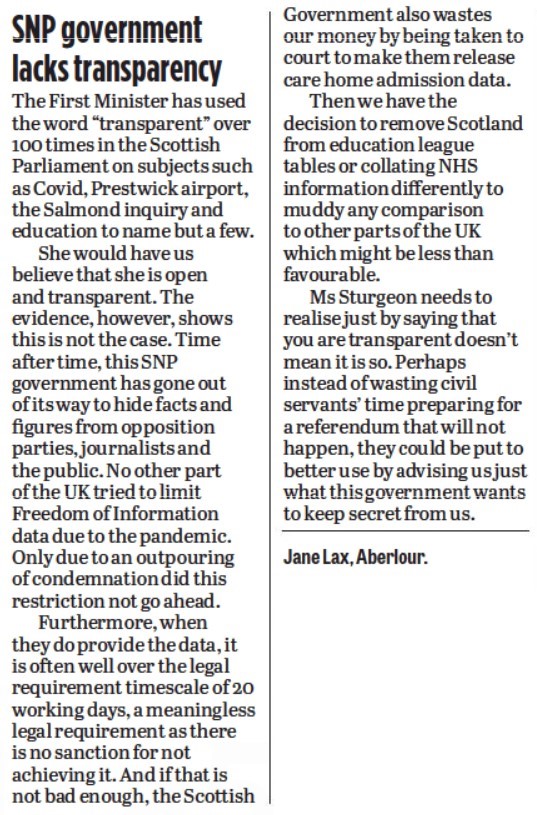 The First Minister has used the word “transparent” over 100 times in the Scottish Parliament on subjects such as Covid, Prestwick airport, the Salmond inquiry and education to name but a few. She would have us believe that she is open and transparent. The evidence, however, shows this is not the case. Time after time, this SNP government has gone out of its way to hide facts and figures from opposition parties, journalists and the public. No other part of the UK tried to limit Freedom of Information data due to the pandemic. Only due to an outpouring of condemnation did this restriction not go ahead. Furthermore, when they do provide the data, it is often well over the legal requirement timescale of 20 working days, a meaningless legal requirement as there is no sanction for not achieving it. And if that is not bad enough, the Scottish Government also wastes our money by being taken to court to make them release care home admission data. Then we have the decision to remove Scotland from education league tables or collating NHS information differently to muddy any comparison to other parts of the UK which might be less than favourable. Ms Sturgeon needs to realise just by saying that you are transparent doesn’t mean it is so. Perhaps instead of wasting civil servants’ time preparing for a referendum that will not happen, they could be put to better use by advising us just what this government wants to keep secret from us. Jane Lax, Aberlour.

In Context: Pensions in an Independent Scotland – Holyrood
Scroll to top