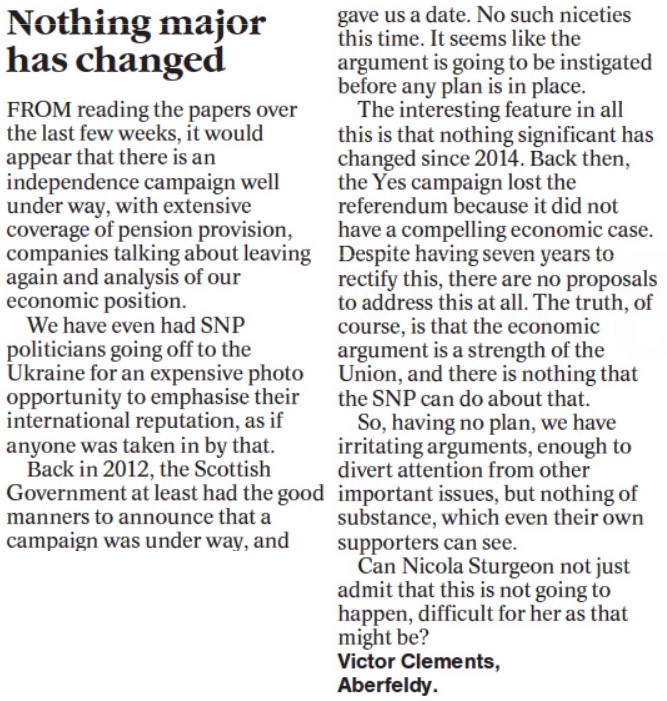 From reading the papers over the last few weeks, it would appear that there is an independence campaign well underway, with extensive coverage of pension provision, companies talking about leaving again and analysis of our economic position. We have even had SNP politicians going off to the Ukraine for an expensive photo opportunity to emphasise their international reputation as if anyone was taken in by that. Back in 2012, the Scottish Government at least had the good manners to announce that a campaign was underway, and gave us a date. No such niceties this time. It seems like the argument is going to be instigated before any plan is in place. The interesting feature in all this is that nothing significant has changed since 2014. Back then, the Yes campaign lost the referendum because it did not have a compelling economic case. Despite having seven years to rectify this, there are no proposals to address this at all. The truth, of course, is that the economic argument is a strength of the Union, and there is nothing that the SNP can do about that. So, having no plan, we have irritating arguments, enough to divert attention from other important issues, but nothing of substance, which even their own supporters can see. Can Nicola Sturgeon not just admit that this is not going to happen, difficult for her as that might be? Victor Clements, Aberfeldy. 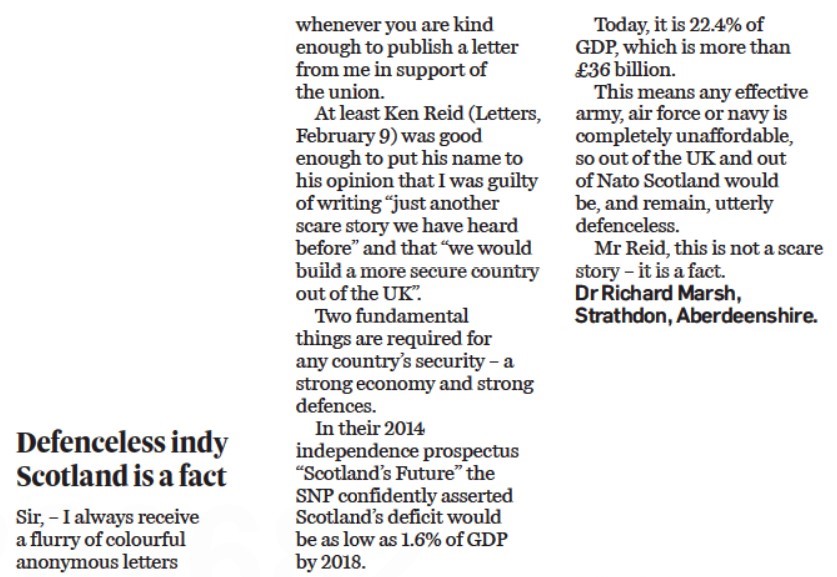 Sir, – I always receive a flurry of colourful anonymous letters whenever you are kind enough to publish a letter from me in support of the union. At least Ken Reid (Letters, February 9) was good enough to put his name to his opinion that I was guilty of writing “just another scare story we have heard before” and that “we would build a more secure country out of the UK”. Two fundamental things are required for any country’s security – a strong economy and strong defences. In their 2014 independence prospectus “Scotland’s Future” the SNP confidently asserted Scotland’s deficit would be as low as 1.6% of GDP by 2018. Today, it is 22.4% of GDP, which is more than £36 billion. This means any effective army, air force or navy is completely unaffordable, so out of the UK and out of Nato Scotland would be, and remain, utterly defenceless. Mr Reid, this is not a scare story-it is a fact. Dr Richard Marsh, Strathdon, Aberdeenshire. 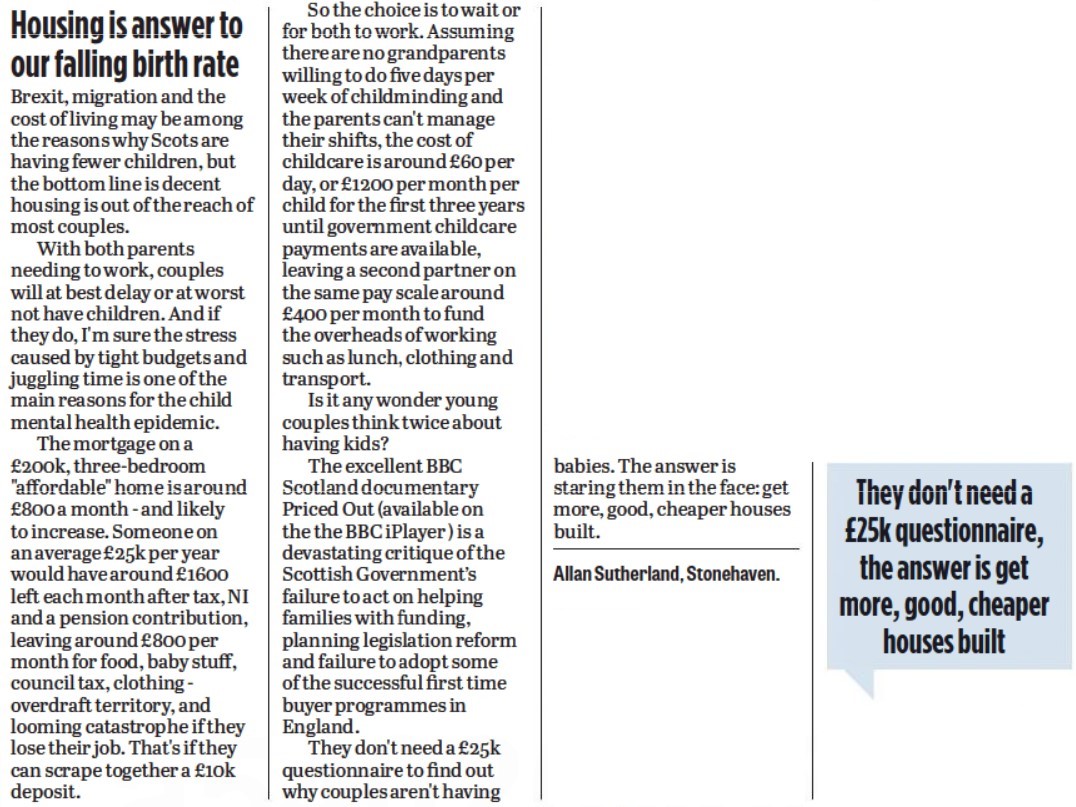 Brexit, migration and the cost of living may be among the reasons why Scots are having fewer children, but the bottom line is decent housing is out of the reach of most couples. With both parents needing to work, couples will at best delay or at worst not have children. And if they do, I’m sure the stress caused by tight budgets and juggling time is one of the main reasons for the child mental health epidemic. The mortgage on a £200k, three-bedroom “affordable” home is around £800 a month – and likely to increase. Someone on average £25k per year would have around £1600 left each month after tax, NI and a pension contribution, leaving around £Boo per month for food, baby stuff, council tax, clothing -overdraft territory, and looming catastrophe if they lose their job. That’s if they can scrape together a flok deposit. So the choice is to wait or for both to work. Assuming there are no grandparents willing to do five days per week of childminding and the parents cant manage their shifts, the cost of childcare is around £6o per day, or £1200 per month per child for the first three years until government childcare payments are available, leaving a second partner on the same pay scale around £400 per month to fund the overheads of working such as lunch, clothing and transport. Is it any wonder young couples think twice about having kids? The excellent BBC Scotland documentary Priced Out (available on the BBC iPlayer ) is a devastating critique of the Scottish Government’s failure to act on helping families with funding, planning legislation reform and failure to adopt some of the successful first-time buyer programmes in England. They don’t need a £25k questionnaire to find out why couples aren’t having babies. The answer is staring them in the face: get more, good, cheaper houses built. Allan Sutherland, Stonehaven.

Yesterday James Dornan, the SNP MSP for Glasgow Cathcart, wrote in a tweet regarding Sarah Smith, the former BBC Scotland editor, that she “imagined” the bile, hatred and misogyny she had experienced in Scotland. When the Times editor reported on this tweet, Dornan in my opinion doubled down on his attitude by saying perhaps he should have said “exaggerated”. Who is James Dornan to think he can determine what impact the behaviour Ms Smith endured had on her? It clearly made enough of an impact for her to leave her homeland and move to the US. I remember when Sarah Smith spoke of Nicola Sturgeon enjoying the opportunity to set her own Covid rules. Only a half-wit would have thought that Ms Sm ith meant that the First Minister took any pleasure from it but Ms Smith was hounded until she had apologised on more than one occasion for using a word which offended the SNP. I despair that we have a political culture in Scotland now which determines what people can and can’t say and who can be offended. No apology will be forthcoming from Mr Doran, no doubt, let alone more than one. Jane Lax, Aberlour.

In Context: Pensions in an Independent Scotland – Holyrood