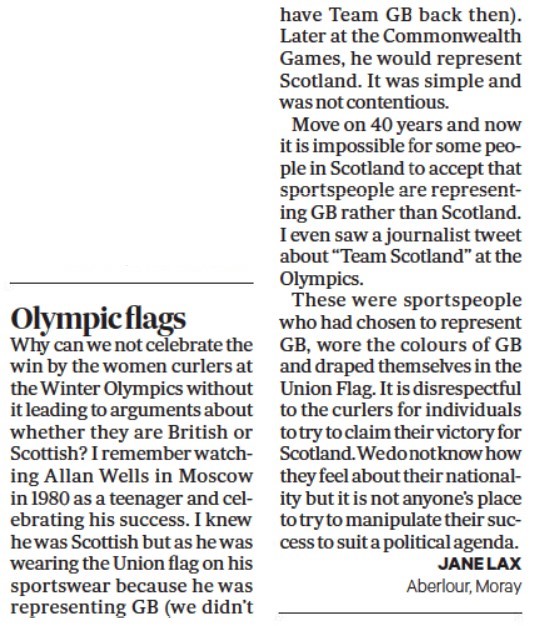 Why can we not celebrate the win by the women curlers at the Winter Olympics without it leading to arguments about whether they are British or Scottish? I remember watching Allan Wells in Moscow in 1980 as a teenager and celebrating his success. I knew he was Scottish but as he was wearing the Union flag on his sportswear because he was representing GB (we didn’t have Team GB back then). Later at the Commonwealth Games, he would represent Scotland. It was simple and was not contentious. Move on 40 years and now it is impossible for some people in Scotland to accept that sportspeople are representing GB rather than Scotland. I even saw a journalist tweet about “Team Scotland” at the Olympics. These were sportspeople who had chosen to represent GB, wore the colours of GB and draped themselves in the Union Flag. It is disrespectful to the curlers for individuals to try to claim their victory for Scotland. We do not know how they feel about their nationality but it is not anyone’s place to try to manipulate their success to suit a political agenda. Jane Lax, Aberlour, Moray.

Why are Scots not allowed to know the truth about what goes on in our country? The OECD reviewed Curriculum for Excellence, a document of interest to all engaged in education and of course to parents of school-age children. Are we allowed to know what the OECD concluded about this important matter? No, because we need to be shielded from what was said. It is not safe to release this document as completed by the OECD until ministers have added to it their own amendments. I think we can guess what these amendments would amount to – a sanitising of any criticism levelled by the OECD at Curriculum for Excellence. This is an important matter because of local elections due in May. Publication of the OECD report was held back last year so that it would not be in the public domain before the Holyrood election. The auditor general for Scotland has already alerted us to the lack of transparency exhibited by some public authorities. Now the OECD’s warning that `stakeholders lack transparency on where their responsibilities to CfE lie…which creates confusion’ has been cut from the OECD report and replaced, at the behest of ministers, by something more anodyne. Is this tolerable in what is, at least nominally, a democratic polity? Jill Stephenson, Edinburgh.

The “Sturgeon Private Army” of spin doctors and press officers is growing annually and is now thought to cost E9million a year. Meanwhile, councils remain underfunded mainly because of extravagances like this and the fact that the SNP Government does not pass on the full allowance from Westminster. They’ve been screaming from the rooftops for years about “Westminster austerity” but they are fooling no one apart from their own supporters. Ian Balloch, Grangemouth.

Yesterday James Dornan, the SNP MSP for Glasgow Cathcart, wrote in a tweet regarding Sarah Smith, the former BBC Scotland editor, that she “imagined” the bile, hatred and misogyny she had experienced in Scotland. When the Times editor reported on this tweet, Dornan in my opinion doubled down on his attitude by saying perhaps he should have said “exaggerated”. Who is James Dornan to think he can determine what impact the behaviour Ms Smith endured had on her? It clearly made enough of an impact for her to leave her homeland and move to the US. I remember when Sarah Smith spoke of Nicola Sturgeon enjoying the opportunity to set her own Covid rules. Only a half-wit would have thought that Ms Sm ith meant that the First Minister took any pleasure from it but Ms Smith was hounded until she had apologised on more than one occasion for using a word which offended the SNP. I despair that we have a political culture in Scotland now which determines what people can and can’t say and who can be offended. No apology will be forthcoming from Mr Doran, no doubt, let alone more than one. Jane Lax, Aberlour. 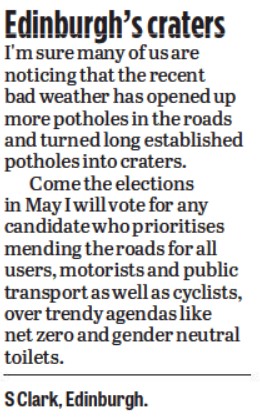 I’m sure many of us are noticing that the recent bad weather has opened up more potholes in the roads and turned long-established potholes into craters. Come the elections in May I will vote for any candidate who prioritises mending the roads for all users, motorists and public transport as well as cyclists, over trendy agendas like net-zero and gender-neutral toilets. S Clark, Edinburgh.