Sir, – From reading the papers over the last few weeks, it would appear that there is an independence campaign well underway, with extensive coverage of pension provision, companies talking about leaving again and analysis of our economic position. We have even had SNP politicians going off to the Ukraine for an expensive photo opportunity to emphasise their international reputation as if anyone was taken in by that. Back in 2012, the Scottish Government at least had the good manners to announce that a campaign was under way, and they gave us a date. No such niceties this time. It seems like the argument is going to be instigated before any plan is in place. The interesting feature in all this is that nothing significant has changed since 2014. Back then, the Yes campaign lost the referendum because they did not have a compelling economic case. Despite having seven years to rectify this, there are no proposals to address this at all. The truth of course is that the economic argument is a strength of the union, and there is nothing that the SNP can do about that. So, having no plan, we have irritating arguments, enough to divert attention from other important issues but nothing of substance, which even their own supporters can see. Can Nicola Sturgeon not just admit that this is not going to happen, difficult for her as that might be? Victor Clements, Mamie’s Cottage, Aberfeldy. 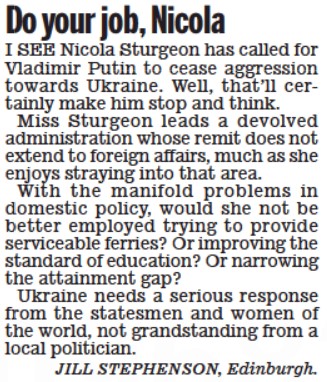 I see Nicola Sturgeon has called for Vladimir Putin to cease aggression towards Ukraine. Well, that’ll certainly make him stop and think. Miss Sturgeon leads a devolved administration whose remit does not extend to foreign affairs, much as she enjoys straying into that area. With the manifold problems in domestic policy, would she not be better employed trying to provide serviceable ferries? Or improving the standard of education? Or narrowing the attainment gap? Ukraine needs a serious response from the statesmen and women of the world, not grandstanding from a local politician. Jill Stephenson, Edinburgh. 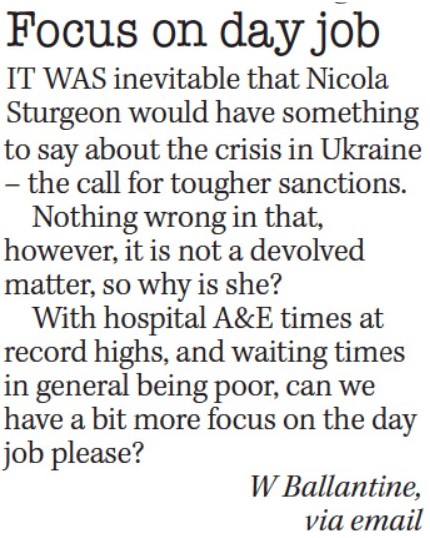 It was inevitable that Nicola Sturgeon would have something to say about the crisis in Ukraine – the call for tougher sanctions. Nothing wrong in that, however, it is not a devolved matter, so why is she? With hospital A&E times at record highs, and waiting times, in general, being poor, can we have a bit more focus on the day job please? W Ballantine, via email.

Now that low emission zones are springing up in Scotland, how will they deal with all the vacuous hot air that emanates regularly from the Scottish parliament? Vincent Saunders, Troon, Ayrshire.