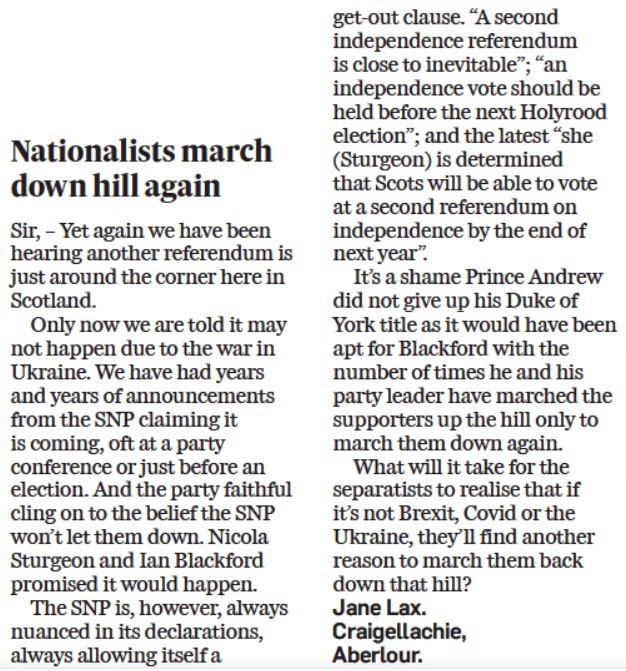 Yet again we have been hearing another referendum is just around the corner here in Scotland. Only now we are told it may not happen due to the war in Ukraine. We have had years and years of announcements from the SNP claiming it is coming, oft at a party conference or just before an election. And the party faithful cling on to the belief the SNP won’t let them down. Nicola Sturgeon and Ian Blackford promised it would happen. The SNP is, however, always nuanced in its declarations, always allowing itself a get-out clause. “A second independence referendum is close to inevitable”; “an independence vote should be held before the next Holyrood election”; and the latest “she (Sturgeon) is determined that Scots will be able to vote at a second referendum on independence by the end of next year’: It’s a shame Prince Andrew did not give up his Duke of York title as it would have been apt for Blackford with the number of times he and his party leader have marched the supporters up the hill only to march them down again. What will it take for the separatists to realise that if it’s not Brexit, Covid or the Ukraine, they’ll find another reason to march them back down that hill. Jane Lax. Craigellachie, Abertour.

The war in Europe has another casualty, that of Scottish independence. Ian Blackford has more or less admitted this so Nicola Sturgeon’s long-promised referendum in 2023 is now is severe doubt. Once this date is lost”, so is the cause. The world has changed dramatically in recent days and independence is now a quantum leap more risky a venture than it has ever been. Coupled with the SNP/Green stance on possession of nuclear weapons the position on independence leaves Scotland extremely exposed in so many ways as to be a non-starter. The comfort zone of European Union membership is unlikely to welcome a Scotland which has removed a large part of its nuclear umbrella via Nato. Nicola Sturgeon’s position is now extremely exposed, as is the alliance between the SNP and the Greens. The “fallout” might not be radioactive but it will be equally destructive. Gerald Edwards. 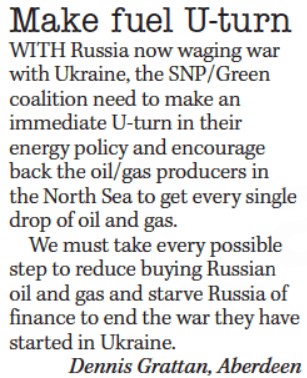 With Russia now waging war with Ukraine, the SNP/Green coalition need to make an immediate U-turn in their energy policy and encourage back the oil/gas producers in the North Sea to get every single drop of oil and gas. We must take every possible step to reduce buying Russian oil and gas and starve Russia of finance to end the war they have started in Ukraine. Dennis Grattan, Aberdeen

I see that Nicola Sturgeon has sent Ian Blackford out to deliver bad news to their followers: that they should focus on the Ukraine crisis and not expect a referendum in the short term (“Blackford doubles down on pledge to remove Trident amid nuclear tensions”, The Herald, March 7). In truth there was never going to be a referendum in 2023, Ms Sturgeon’s proclaimed favoured date. Some former SNP high-profile Naggers have abandoned that illusion to the extent of ceasing their campaigning activity. We already knew that Ms Sturgeon was merely kicking the can down the road by announcing a vote in 2023. She cannot hold a legitimate referendum without the transfer of authority for one, with a Section 30 order, from the UK Prime Minister, who has steadfastly refused to provide one. She could hold an unauthorised referendum, but that would raise questions, probably legal questions, about the cooperation of local authorities with premises and staffing for such an event. An unauthorised referendum would not be recognised by other countries or international organisations. Ms Sturgeon had already indicated that she was not planning to hold a referendum by having no mention of it In the recent 10-year SNP economic plan that isn’t really a plan which was announced by Kate Forbes. Why would an SNP economic plan make provision for the next 10 years without discussing the circumstances of a separate Scotland if the objective was to hold a referendum in that period? Ms Sturgeon’s followers are left wondering what a devolved “focus on Ukraine” is and why that stymies their dream. Jill Stephenson. Edinburgh.