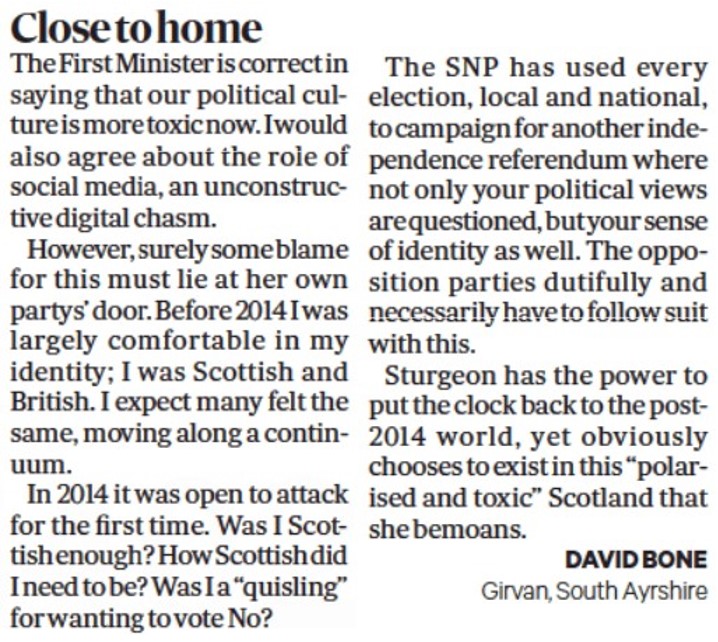 The First Minister is correct in saying that our political culture is more toxic now. I would also agree about the role of social media, an unconstructive digital chasm. However, surely some blame for this must lie at her own partys’ door. Before 2014 I was largely comfortable in my identity; I was Scottish and British. I expect many felt the same, moving along a continuum. In 2014 it was open to attack for the first time. Was I Scottish enough? How Scottish did I need to be? Was I a “quisling” forwanting to vote No? The SNP has used every election, local and national, to campaign for another independence referendum where not only your political views are questioned, but your sense of identity as well. The opposition parties dutifully and necessarily have to follow suit with this. Sturgeon has the power to put the clock back to the post-2014 world, yet obviously chooses to exist in this “polarised and toxic” Scotland that she bemoans. David Bone, Girvan, South Ayrshire.

Having just watched First Minister’s Questions, it has occurred to me that Nicola Sturgeon would rather we thank her for saving 300 jobs than hold her to account for making life for the island communities difficult and poorer in so many ways. As an example, the island of Arran has a population of approximately 5,000. How many islanders have had to pay to stay on the mainland for medical treatment due to the unreliability of the current ferries? How much has it cost the tourism industry? How many jobs on the islands have been lost, how many businesses have closed and how many businesses have failed to prosper and create more jobs due to the SNP decision to save 300 jobs? It was an abomination that the contract was entered into without the full refund guarantee, not even taking into account the failure to have an agreed design before starting production. How many jobs could have been created with the taxpayers’ money that has had to be spent on trying to get these ferries into service? How many more jobs could have been created by private businesses if they had been served better by this SNP Government? The cost of this fiasco is more than the cost of building the ferries and adapting the harbours to take these ships. It runs to more than we will ever know. Jane Lax, Aberlour. 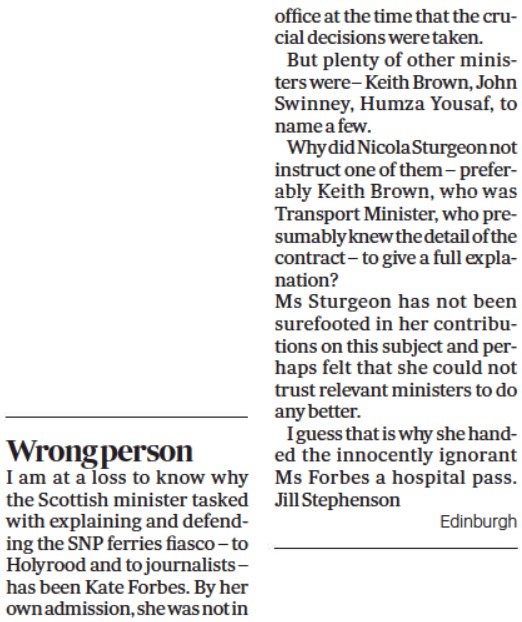 I am at a loss to know why the Scottish minister tasked with explaining and defending the SNP ferries fiasco – to Holyrood and to journalists-has been Kate Forbes. By her own admission, she was not in office at the time that the crucial decisions were taken. But plenty of other ministers were Keith Brown, John Swinney, Humza Yousaf, to name a few. Why did Nicola Sturgeon not instruct one of them – preferably Keith Brown, who was Transport Minister, who presumably knew the detail of the contract- to give a full explanation? Ms Sturgeon has not been surefooted in her contributions on this subject and perhaps felt that she could not trust relevant ministers to do any better. I guess that is why she handed the innocently ignorant Ms Forbes a hospital pass. Jill Stephenson, Edinburgh 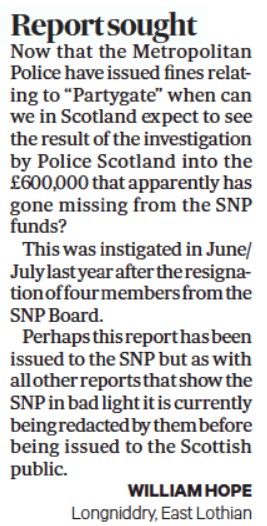 Now that the Metropolitan Police have issued fines relating to “Partygate” when can we in Scotland expect to see the result of the investigation by Police Scotland into the £600,000 that apparently has gone missing from the SNP funds? This was instigated in June/ July last year after the resignation of four members from the SNP Board. Perhaps this report has been issued to the SNP but as with all other reports that show the SNP in a bad light, it is currently being redacted by them before being issued to the Scottish public. William Hope, Longniddry, East Lothian. 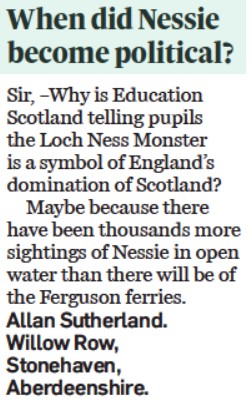 Sir, -Why is Education Scotland telling pupils the Loch Ness Monster is a symbol of England’s domination of Scotland? Maybe because there have been thousands more sightings of Nessie in open water than there will be of the Ferguson ferries. Allan Sutherland, Willow Row, Stonehaven, Aberdeenshire.