Surely the time has come for we Scots voters to give serious thought to the gross inadequacy of Nicola Sturgeon and her SNP ministerial colleagues in their attempts to govern Scotland? One can scarcely pick up a newspaper these days without reading about some form of criticism of this SNP minority administration. This problem takes on a multitude of shapes and forms and highlights the major problems faced throughout Scotland’s administration, be it at parliament level, or within the realms of the local authorities. Just how well is Scotland really faring in the key areas of education, health, welfare, public transport, Police Scotland, local authority services? The list of discontent seems endless, and quite recently it has even been extended to raise the question over “missing” SNP membership funds. Then there are the well-publicised hiccups pertaining to West Coast and Hebridean Ferry services, coupled with the disastrous related ship-building contracts. Just how much more have the good folks of Scotland got to put up with from this feeble excuse for an administration, the political case of which is built entirely on historical emotion, and grievance against the UK? One thing they are good at is the adoption of the blame game – to quote that auld Scots expression: “It wisnae me”. Robert I G Scott, Northfield, Ceres, Fife. 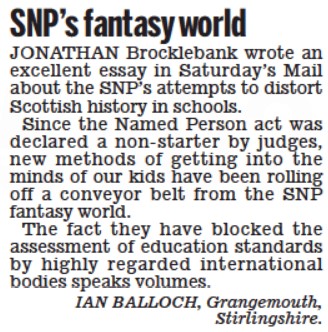 JONATHAN Brocklebank wrote an excellent essay in Saturday’s Mail about the SNP’s attempts to distort Scottish history in schools. Since the Named Person act was declared a non-starter by judges, new methods of getting into the minds of our kids have been rolling off a conveyor belt from the SNP fantasy world. The fact they have blocked the assessment of education standards by highly regarded international bodies speaks volumes. IAN BALLOCH, Grangemouth.

The Auditor-General in Scotland, Stephen Boyle, reported that there had been little progress towards dosing the attainment gap between better-off and poorer children in Scottish schools. After 15 years of SNP government, and now under a First Minister whose avowed top priority is education there is still a glaring difference between achievement in schools on the part of children from better-off neighbourhoods and those from less favoured ones. The contrast between this failure, while SNP ministers are chauffeured around in style, and the philanthropy of David MacMillan is stark. Prof MacMillan is a Scottish Nobel prizewinner in chemistry who works at Princeton University. He has announced that his share of the prize, £400,000, will be used to help underprivileged children access higher education. Prof. MacMillan’s gift is both welcome and the mark of an utterly decent human being. It is just sad that there is in Scotland such a need for his philanthropic action. Jill Stephenson, Edinburgh. 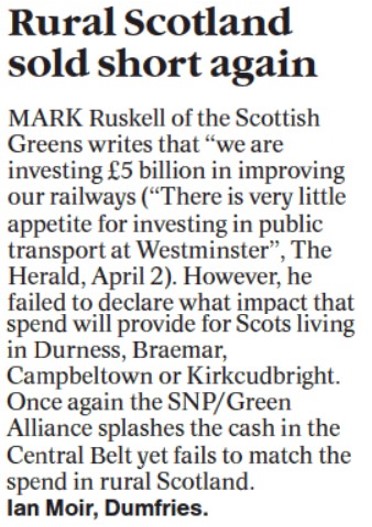 Mark Ruskell of the Scottish Greens writes that “we are investing £5 billion in improving our railways (“There is very little appetite for investing in public transport at Westminster”, The Herald, April 2). However, he failed to declare what impact that spend will provide for Scots living in Durness, Braemar, Campbeltown or Kirkcudbright. Once again the SNP/Green Alliance splashes the cash in the Central Belt yet fails to match the spend in rural Scotland. Ian Moir, Dumfries. 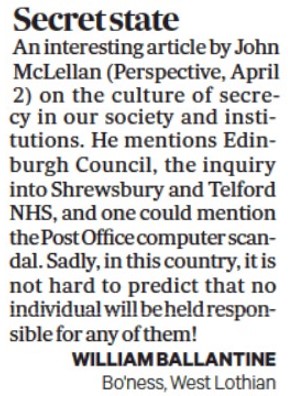 An interesting article by John McLellan (Perspective, April 2) on the culture of secrecy in our society and institutions. He mentions Edinburgh Council, the inquiry into Shrewsbury and Telford NHS, and one could mention the Post Office computer scan-dal. Sadly, in this country, it is not hard to predict that no individual will be held responsible for any of them! William Ballantine, Bo’ness, West Lothian.

Stalker torment as one in three NHS staff ‘targeted by patients and colleagues’...