The SNP tells the people of Scotland to get out of their cars and use public transport or cycle whilst Ministers travel door to door like millionaires in their chauffeur-driven vehicles. While the poor taxpayer is in for tough and austere times, our SNP Ministers are living in the lap of luxury with top salaries and massive expenses. This, of course, does not include Nicola Sturgeon, who has unlimited access to a limo – but details of her journeys are kept secret for security reasons. Dennis Forbes Grattan, Aberdeen. 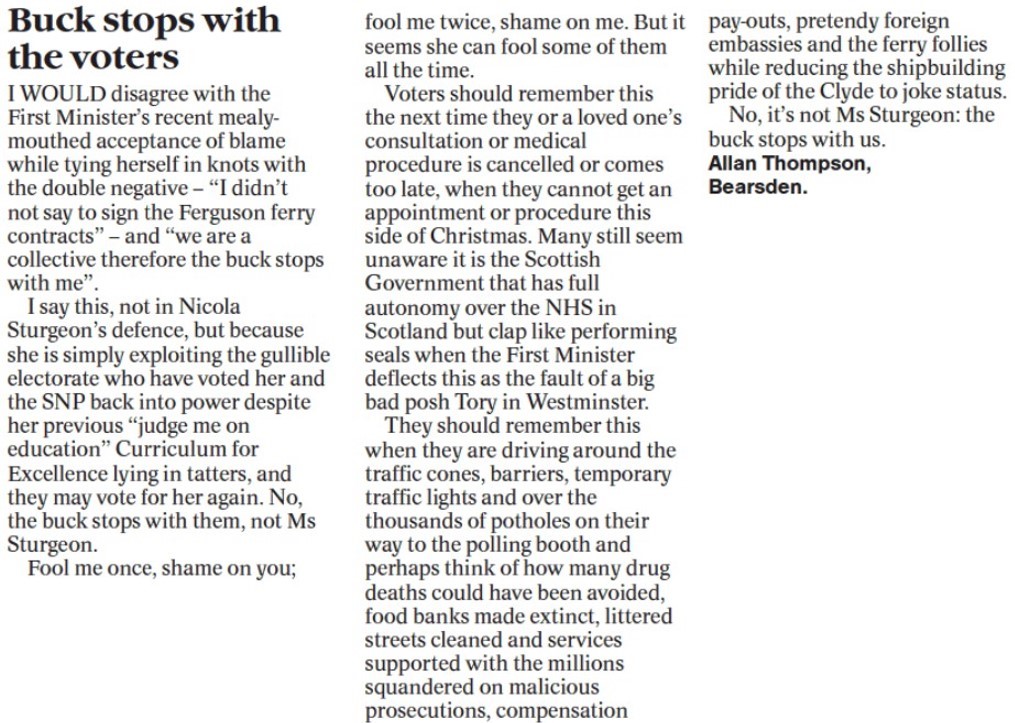 I would disagree with the First Minister’s recent mealy-mouthed acceptance of blame while tying herself in knots with the double negative – “I didn’t not say to sign the Ferguson ferry contracts” – and “we are a collective therefore the buck stops with me”. I say this, not in Nicola Sturgeon’s defence, but because she is simply exploiting the gullible electorate who have voted her and the SNP back into power despite her previous “judge me on education” Curriculum for Excellence lying in tatters, and they may vote for her again. No, the buck stops with them, not Ms Sturgeon. Fool me once, shame on you; fool me twice, shame on me. But it seems she can fool some of them all the time. Voters should remember this the next time they or a loved one’s consultation or medical procedure is cancelled or comes too late, when they cannot get an appointment or procedure this side of Christmas. Many still seem unaware it is the Scottish Government that has full autonomy over the NHS in Scotland but clap like performing seals when the First Minister deflects this as the fault of a big bad posh Tory in Westminster. They should remember this when they are driving around the traffic cones, barriers, temporary traffic lights and over the thousands of potholes on their way to the polling booth and perhaps think of how many drug deaths could have been avoided, food banks made extinct, littered streets cleaned and services supported with the millions squandered on malicious prosecutions, compensation pay-outs, pretendy foreign embassies and the ferry follies while reducing the shipbuilding pride of the Clyde to joke status. No, it’s not Ms Sturgeon: the buck stops with us. Allan Thompson, Bearsden. 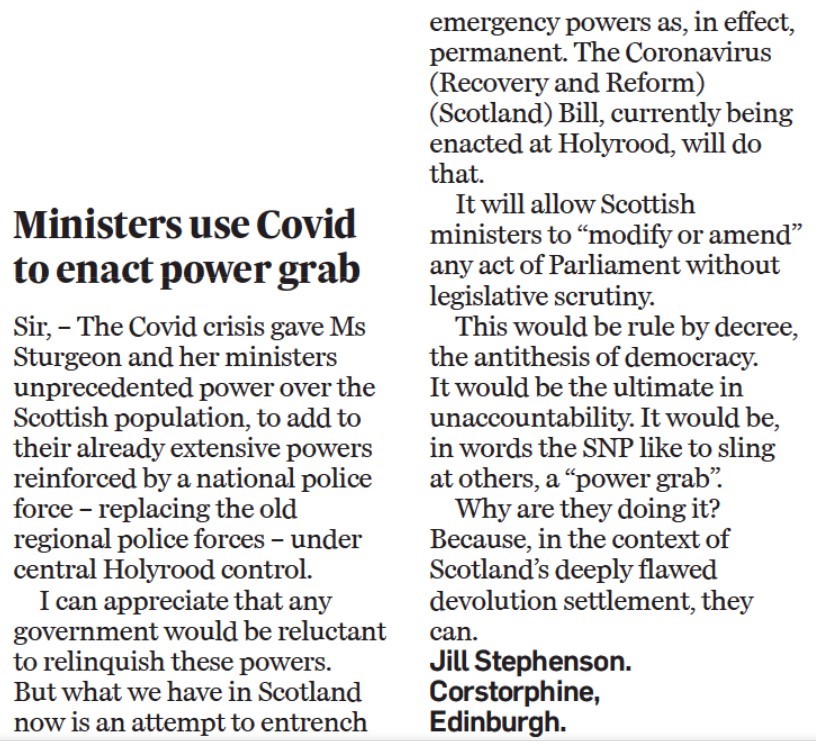 The Covid crisis gave Ms Sturgeon and her ministers unprecedented power over the Scottish population, to add to their already extensive powers reinforced by a national police force – replacing the old regional police forces – under central Holyrood control. I can appreciate that any government would be reluctant to relinquish these powers. But what we have in Scotland now is an attempt to entrench emergency powers as, in effect, permanent. The Coronavirus (Recovery and Reform) (Scotland) Bill, currently being enacted at Holyrood, will do that. It will allow Scottish ministers to “modify or amend” any act of Parliament without legislative scrutiny. This would be rule by decree, the antithesis of democracy. It would be the ultimate in unaccountability. It would be, in words the SNP like to sling at others, a “power grab”. Why are they doing it? Because, in the context of Scotland’s deeply flawed devolution settlement, they can. Jill Stephenson. Corstorphine, Edinburgh. 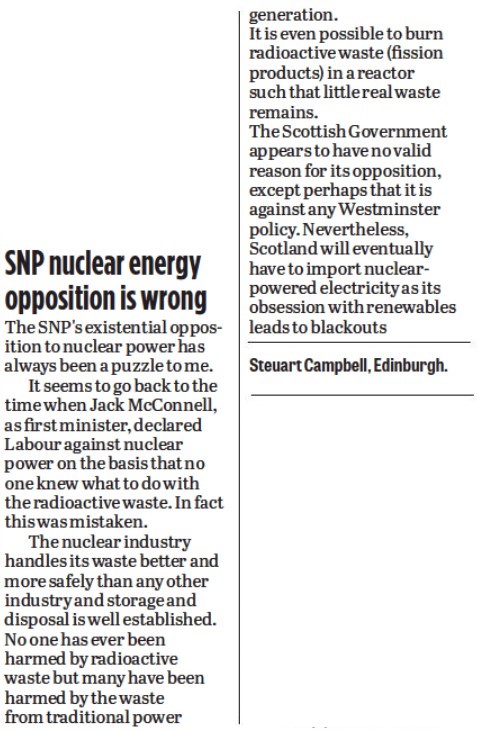 The SNP’s existential opposition to nuclear power has always been a puzzle to me. It seems to go back to the time when Jack McConnell, as first minister, declared Labour against nuclear power on the basis that no one knew what to do with the radioactive waste. In fact, this was mistaken. The nuclear industry handles its waste better and more safely than any other industry and storage and disposal is well established. No one has ever been harmed by radioactive waste but many have been harmed by the waste from traditional power generation. It is even possible to burn radioactive waste (fission products) in a reactor such that little real waste remains. The Scottish Government appears to have no valid reason for its opposition, except perhaps that it is against any Westminster policy. Nevertheless, Scotland will eventually have to import nuclear-powered electricity as its obsession with renewables leads to blackouts. Stuart Campbell, Edinburgh.

Scots doctors have been found crying on shift as pressure on NHS leaving them...