I find it interesting to note that Iain Gunn (Letters, April 18) has “faith” in Nicola Sturgeon to restore Scotland’s NHS. How can he have “faith” in Ms Sturgeon when she has the most abysmal record of leading Scotland over the past seven years? Has he conveniently forgotten about her record on drug deaths, the highest in Europe; alcohol deaths, the worst in the UK, and on education on which she asked to be judged? On vanity projects costing the taxpayer billions including Prestwick, BiFab, Ferguson Marine – where she paid the last CEO £2,500 per day – Police Scotland, which has a financial black hole of £200 million and was established to save money, the failed Scottish Energy Company, the failed Scottish Stock Exchange and millions spent on setting up foreign “embassies”? Has he forgotten about the disgrace of the closed Edinburgh hospital, the Named Person Scheme, the Hate Crime Bill, the Child Sex Survey and on and on and on? Ms Sturgeon promised to be a leader for all Scots but has used her power to agitate to destroy the UK. She has manipulated her followers to blame her shortcomings on anyone and anything, especially Westminster. Based on her track record, it is naive for anyone to have belief that Ms Sturgeon can restore any of the institutions she has systematically ruined. Douglas Cowe, Newmachar.

Fifty-five years ago, although based at Dundee Royal Infirmary, I did weekly out-patient clinics in Montrose Infirmary. My wife used to come with me because the food shopping in Montrose was excellent. There were two very good, well-stocked butchers, two fish shops with plentiful supplies and a Wm Low’s with local produce from farms. We revisited the town the other day and found the shops to be downmarket. The only shop from yesteryear was Frost’s the bakers. I fell into conversation with a resident in Montrose. I explained that I had done clinics in the infirmary 55 years ago. She said that Montrose Infirmary had been closed for some years. She had a gynaecological outpatient appointment in Perth! A relative living in Dundee has been told that her health centre has closed. She was also told not to look for another GP but wait until notified by the health board. She is now paying taxes for a non-service. This is fraud and the Scottish Government would be up in arms about it if it was in the private sector. There is also the long-running sore of CalMac and the Ferguson shipyard, costing the taxpayer a fortune, and wrecking the economy of the Western Isles. Ruining the tax base of business is economic madness. Where do the MSPs think their salaries come from? Given the nationalisation of ScotRail, we can confidently expect another CalMac fiasco. Welcome to “Stalina” Sturgeon’s Scottish soviet. Ian Strachan, Golf Course Road, Blairgowrie. 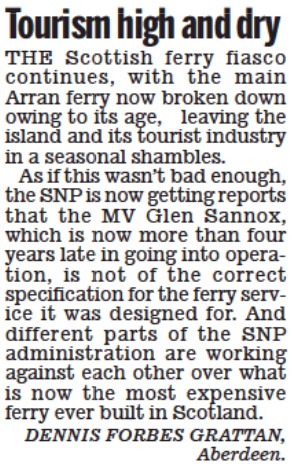 The Scottish ferry fiasco continues, with the main Arran ferry now broken down owing to its age, leaving the island and its tourist industry in a seasonal shambles. As if this wasn’t bad enough, the SNP is now getting reports that the MV Glen Sannox, which is now more than four years late in going into operation, is not of the correct specification for the ferry service it was designed for. And different parts of the SNP administration are working against each other over what is now the most expensive ferry ever built in Scotland. Dennis Grattan, Aberdeen. 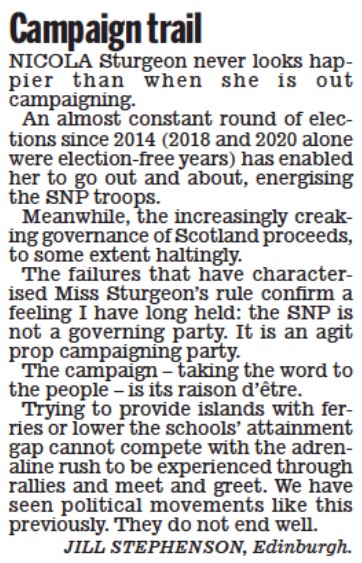 Nicola Sturgeon never looks happier than when she is out campaigning. An almost constant round of elections since 2014 (2018 and 2020 alone were election-free years) has enabled her to go out and about, energising the SNP troops. Meanwhile, the increasingly creak-ing governance of Scotland proceeds, to some extent haltingly. The failures that have characterised Miss Sturgeon’s rule confirm a feeling I have long held: the SNP is not a governing party. It is an agitprop campaigning party. The campaign – taking the word to the people – is its raison d’etre. Trying to provide islands with ferries or lower the schools’ attainment gap cannot compete with the adrenaline rush to be experienced through rallies and meet and greet. We have seen political movements like this previously. They do not end well. Jill Stephenson, Edinburgh.