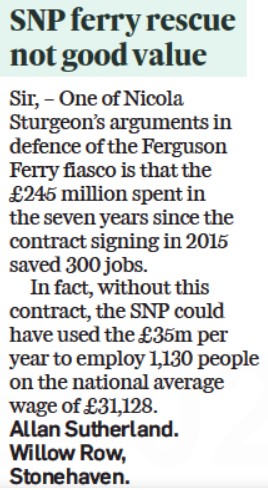 One of Nicola Sturgeon’s arguments in defence of the Ferguson Ferry fiasco is that the £245 million spent in the seven years since the contract signing in 2015 saved 300 jobs. In fact, without this contract, the SNP could have used the £35m per year to employ 1,130 people on the national average wage of £31,128. Allan Sutherland. Willow Row, Stonehaven. 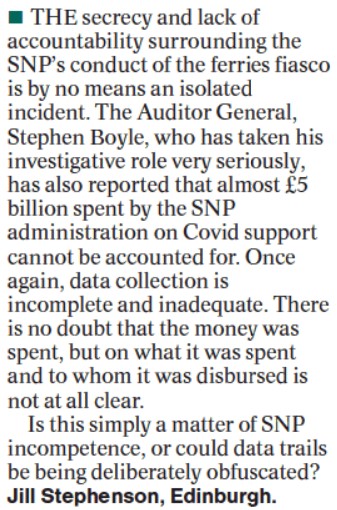 The secrecy and lack of accountability surrounding the SNP’s conduct of the ferries fiasco is by no means an isolated incident. The Auditor-General, Stephen Boyle, who has taken his investigative role very seriously, has also reported that almost £5 billion spent by the SNP administration on Covid support cannot be accounted for. Once again, data collection is incomplete and inadequate. There is no doubt that the money was spent, but on what it was spent and to whom it was disbursed is not at all clear. Is this simply a matter of SNP incompetence, or could data trails be being deliberately obfuscated? Jill Stephenson, Edinburgh.

Peter D Cheyne (Letters, 25 April) talks about people having short memories. He appears to be suffering short-sightedness when talking about the demise of shipbuilding skills on the Clyde. Perhaps he needs to take a wee wander from the Ferguson Yard and head over to Govan and Scotstoun to the BAE Systems Marine ship-building yards which are not having the problems that Fergusons are with their project. Both on the Clyde, but 25 minutes and less than 20 miles can make a whole lot of difference. BAE are building Type 26 frigates and looking to employ an additional 400 skilled tradespeople this year, having secured more than 3,400 jobs in Scotland. The nationalised shipbuilder employs just 400 people yet has cost the tax-payer millions, with the price of the two ferries rising from £97 million to about £240m, but the sky is the limit It could cost us even more. The difference between the two organisations is not in the ability to build ships but in the process of design, placing contracts — not risking millions of taxpayers’ funds and having a commercial mindset. These BAE contracts bring not only jobs to those working there but to their suppliers and many support businesses too, enhancing many local skills. Jane Lax, Aberlour. 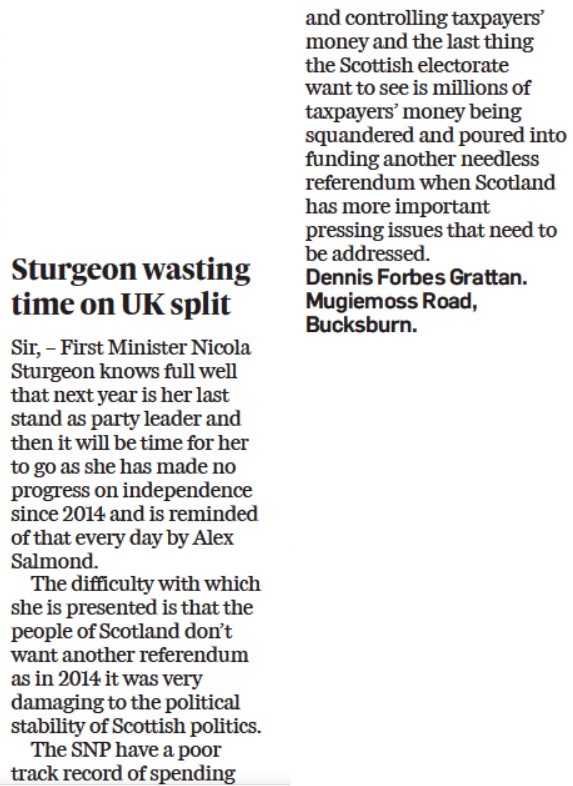 First Minister Nicola Sturgeon knows full well that next year is her last stand as party leader and then it will be time for her to go as she has made no progress on independence since 2014 and is reminded of that every day by Alex Salmond. The difficulty with which she is presented is that the people of Scotland don’t want another referendum as in 2014 it was very damaging to the political stability of Scottish politics. The SNP have a poor track record of spending and controlling taxpayers’ money and the last thing the Scottish electorate want to see is millions of taxpayers’ money being squandered and poured into funding another needless referendum when Scotland has more important pressing issues that need to be addressed. Dennis Forbes Grattan, Mugiemoss Road, Bucksburn.

Who do I vote for to get one bin emptied weekly? – Effie Deans

Putin’s war could be the undoing of Nicola Sturgeon – The New State...
Scroll to top