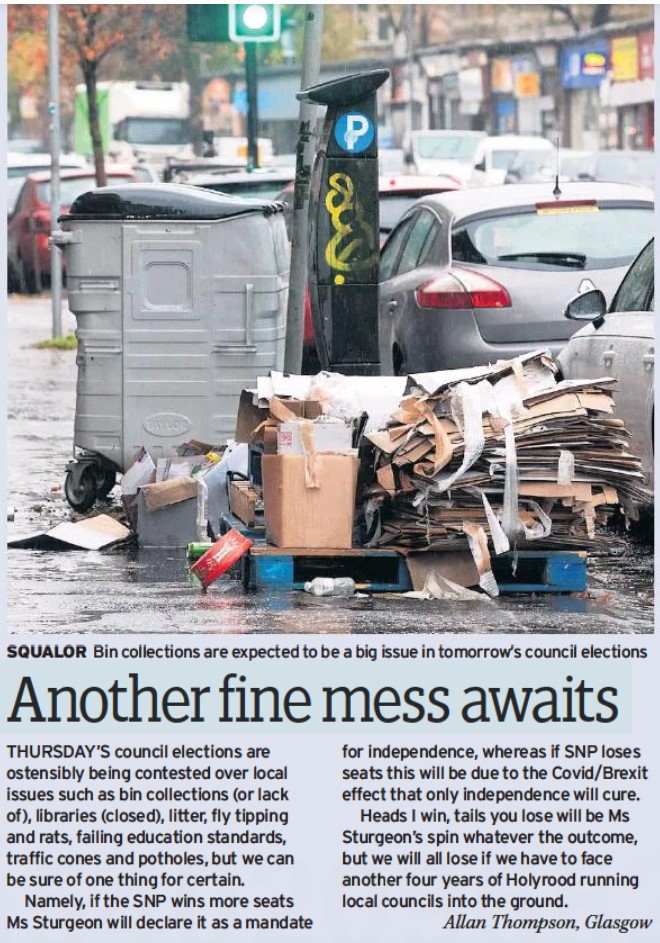 Thursday’s council elections are ostensibly being contested over local issues such as bin collections (or lack of), libraries (closed), litter, fly-tipping and rats, failing education standards, traffic cones and potholes, but we can be sure of one thing for certain. Namely, if the SNP wins more seats Ms Sturgeon will declare it as a mandate for independence, whereas if SNP loses seats this will be due to the Covid/Brexit effect that only independence will cure. Heads I win, tails you lose will be Ms Sturgeon’s spin whatever the outcome, but we will all lose if we have to face another four years of Holyrood running local councils into the ground. Allan Thompson, Glasgow.

Why will the SNP government not do more to help with the cost-of-living crisis? It has responsibility for most benefits. Why not increase them? Council tax could have been held with a £90 million payment to local government. Why no help? The SNP failed to deliver the promised not for profit energy company after spending over £500,000. If one of the costly blunders by the SNP had been prevented we could have had a 10 per cent reduction in council tax rather than an increase. Is this what independence looks like, costly failure after failure, the only difference being SNP would be in charge and couldn’t blame the rest of the UK for its mistakes and inaction? Alastair Murray, Edinburgh. 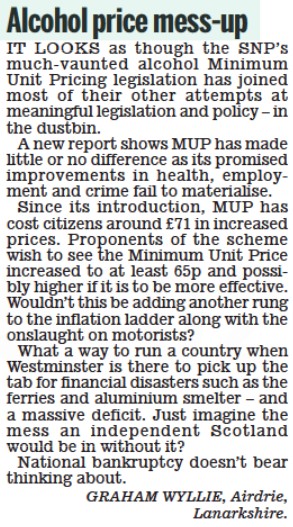 It looks as though the SNP’s much-vaunted alcohol Minimum Unit Pricing legislation has joined most of their other attempts at meaningful legislation and policy – in the dustbin. A new report shows MUP has made little or no difference as its promised improvements in health, employment and crime fail to materialise. Since its introduction, MUP has cost citizens around f71 in increased prices. Proponents of the scheme wish to see the Minimum Unit Price increased to at least 65p and possibly higher if it is to be more effective. Wouldn’t this be adding another rung to the inflation ladder along with the onslaught on motorists? What a way to run a country when WestrninRter is there to pick up the tab for financial disasters such as the ferries and aluminium smelter – and a massive deficit. Just imagine the mess an independent Scotland would be in without it? National bankruptcy doesn’t bear thinking about. Graham Wyllie, Airdrie, Lanarkshire.

Those who often ask if there is anything at all the SNP can get right have had their boots filled recently. The much-vaunted free bus travel for under-22s has been blamed for much of the recent spate of violence, intimidation, graffiti and vandalism on late-night buses in Glasgow. This surge of antisocial behaviour seems to have come in as a direct consequence. In the same way as many other SNP brainwaves and initiatives, the plan was clearly not thought through, if thought past a good headline at all. Highly intelligent, switched-on, ultra-sharp people are needed, not inexperienced, ideological incompetents. Sure, the SNP looks like retaining a good lead in the council elections, for reasons that are well known – basically, its opponents preferring to fight each other. But they are no nearer their dream of breaking up the UK than they were 20 years ago; in fact, they are much further away. Alexander McKay, Edinburgh.