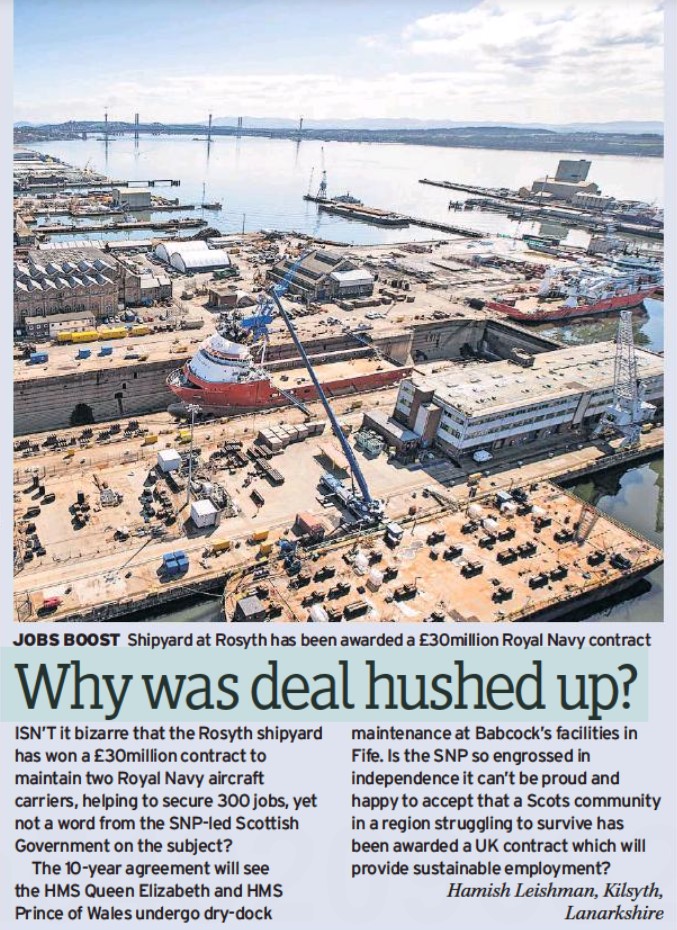 Isn’t it bizarre that the Rosyth shipyard has won a £30million contract to maintain two Royal Navy aircraft carriers, helping to secure 300 jobs, yet not a word from the SNP-led Scottish Government on the subject? The 10-year agreement will see the HMS Queen Elizabeth and HMS Prince of Wales undergo dry-dock maintenance at Babcock’s facilities in Fife. Is the SNP so engrossed in independence it can’t be proud and happy to accept that a Scots community in a region struggling to survive has been awarded a UK contract which will provide sustainable employment? Hamish Leishman, Kilsyth, Lanarkshire.

Nicola Sturgeon was to deliver a speech on foreign policy and climate change yesterday at the Brookings Institution in Washington. There is something surreal about an institution full of expert researchers listening to the thoughts on foreign policy of someone who has no significant experience or expertise in that area because it is not a part of her devolved remit. Brookings’ view of Ms Sturgeon and her presumptuous-ness has been articulated by its director of research in foreign policy, Michael O’Hanlon, who has criticised Ms Stur-geon’s allegedly preferred timing for another referendum, 2023, calling it “weird” in view of the international crisis caused by Vladimir Putin’s aggression against Ukraine. In O’Hanlon’s opinion, attempting to break up the UK at present is the work of “political opportunists, in a slightly unfriendly way to the broader Nato good”. That is putting it diplomatically. In tone-deaf mode, Ms Sturgeon’s line is that Scotland and America- apparently as equals – must cooperate at a time of international crisis: “That is why visits like this one matter.” I doubt that I am the only person (on either side of the Atlantic) left muttering “delusions of grandeur at that claim. Jill Stephenson, Edinburgh. 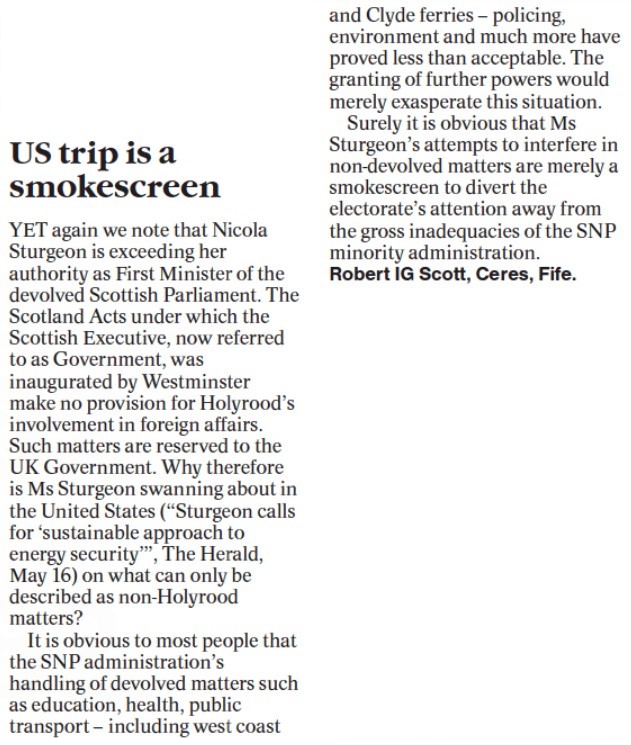 Yet again we note that Nicola Sturgeon is exceeding her authority as First Minister of the devolved Scottish Parliament. The Scotland Acts under which the Scottish Executive, now referred to as Government, was inaugurated by Westminster make no provision for Holyrood’s involvement in foreign affairs. Such matters are reserved to the UK Government. Why therefore is Ms Sturgeon swanning about in the United States (“Sturgeon calls for ‘sustainable approach to energy security’, The Herald, May 16) on what can only be described as non-Holyrood matters? It is obvious to most people that the SNP administration’s handling of devolved matters such as education, health, public transport — including west coast and Clyde ferries — policing, environment and much more have proved less than acceptable. The granting of further powers would merely exasperate this situation. Surely it is obvious that Ms Sturgeon’s attempts to interfere in non-devolved matters are merely a smokescreen to divert the electorate’s attention away from the gross inadequacies of the SNP minority administration. Robert IG Scott, Ceres, Fife.

The SNP and John Swinney seem to be digging themselves into a bigger hole by the day on the ferry scandal. Mr Swinney was not only the deputy first minister but more importantly the finance secretary at the time that the ferry contracts were approved. Claims are being made now that he was not aware of the financial risks associated with the contract. Do we, therefore, conclude that Mr Swinney was incompetent and negligent in approving a high-value contract without understanding the implications or that this is just more spin, trying to avoid taking responsibility for what was a disastrous decision? Jane Lax, Craigellachie, Aberlour.

The Scottish Government urgently needs to change its direction. Independence is no longer a viable issue. The fact is that the political parties supporting the Union received far more votes than the independence supporting ones in the recent election. This was true also in 2014, with a huge turnout and in reality, this has not changed ever since. Now we observe that even the flag-waving independence marchers’ numbers are dwindling to derisory levels. The support simply isn’t there but Scotland is facing a cost of living crisis which really needs Nicola Sturgeon’s full attention instead. Our health service and education are in trouble too. Her government also needs to come up with a more practical scheme to heat Scottish houses rather than ultra-expensive and inefficient heat pumps. If we are all struggling with the cost to heat our homes right now just how will most Scots afford to junk their present systems for this new one? It is time to join the real world. Gerald Edwards, Glasgow.