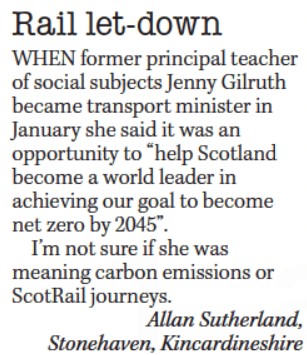 When former principal teacher of social subjects Jenny Gilruth became transport minister in January she said it was an opportunity to “help Scotland become a world leader in achieving our goal to become net-zero by 2045”. I’m not sure if she was meaning carbon emissions or ScotRail journeys. Allan Sutherland, Stonehaven, Kincardineshire 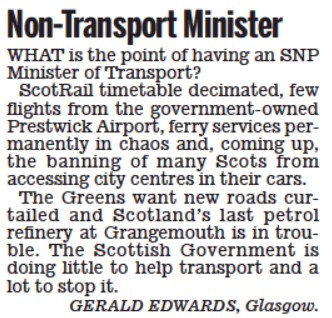 What is the point of having an SNP Minister of Transport? ScotRail timetable decimated, few flights from the government-owned Prestwick Airport, ferry services permanently in chaos and, coming up, the banning of many Scots from accessing city centres in their cars. The Greens want new roads cur-tailed and Scotland’s last petrol refinery at Grangemouth is in trouble. The Scottish Government is doing little to help transport and a lot to stop it. Gerald Edwards, Glasgow. 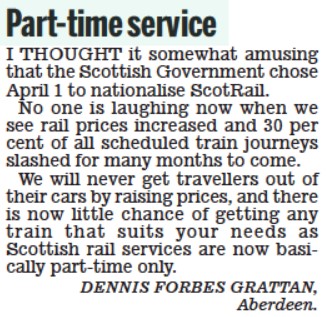 I thought it somewhat amusing that the Scottish Government chose April 1 to nationalise ScotRail. No one is laughing now when we see rail prices increased and 30 per cent of all scheduled train journeys slashed for many months to come. We will never get travellers out of their cars by raising prices, and there is now little chance of getting any train that suits your needs as Scottish rail services are now basically part-time only. Dennis Grattan, Aberdeen.

No substance Folks in the USA must be slightly puzzled by the “state visit” of one Nicola Sturgeon to the North American continent. Her five-day trip has already been described as merely “political opportunism” by one US analyst. Ms Sturgeon should perhaps remember that she is First Minister of only a devolved part of the UK. with a population of around 5.4 million – roughly the same as the State of South Carolina. It could therefore be construed that her ego is larger than her political clout. She has already indicated during her tour that an independent Scotland would join Nato – but such a decision would certainly not receive the blessing of the SNP’s “bed partners”, the Green Party. And furthermore, it could well be that Nato would find her political party’s insistence on the removal of the Faslane Loch Long submarine base rather perturbing. But in any case. without the agreement of the UK Government at Westminster a second referendum on the question of Scottish independence would have no legal standing. And so Scotland will continue to be an integral part of the UK. In this situation perhaps Ms Sturgeon should concentrate her efforts on trying to improve public services throughout Scotland. These have most certainly been grossly neglected under the current administrative regime. It really does seem that her oratory lacks substance. and furthermore. any form of political clout. Robert Scott, Fife.

The SNP’s programme for government in 2016 stated: “It is the defining mission of this government to close the poverty-related attainment gap” in education. Now, Shirley-Anne Somerville admits that the projected ten-year time frame for this is being abandoned. This is disastrous for children in disadvantaged areas, for their families and for Scotland. The surest way for a child in a poor family to achieve success is to raise him/ her out of poverty by providing a top-class education. It is shameful that Scotland whose record in education used to be enviable, cannot achieve this and that its government has now given up trying. We have seen recently the downright waste of public money in Scotland, with the ferries, the Gupta involvement. BiFab, “foreign hubs” and much more. If these monies had been invested in re-engineering Scottish education to become once more a system to emulate, we might have started on the way to providing a first-class education for all of our children. As it is, the Scottish Government’s own figures show tha. since that 2016 programme was announced, overall attainment in numeracy and literacy. in Scotland’s schools has declined- levelling down rather than levelling up. I suppose that is one way of narrowing the attainment gap. Jill Stephenson, Edinburgh. 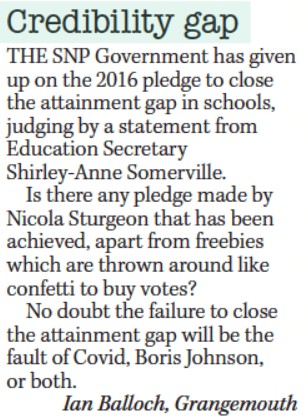 The SNP Government has given up on the 2016 pledge to close the attainment gap in schools, judging by a statement from Education Secretary Shirley-Anne Somerville. Is there any pledge made by Nicola Sturgeon that has been achieved, apart from freebies which are thrown around like confetti to buy votes? No doubt the failure to close the attainment gap will be the fault of Covid, Boris Johnson, or both. Ian Balloch, Grangemouth.