This week, Nicola Sturgeon became our longest-serving First Minister in Scotland, and what a glowing legacy she has created for us. She has launched more independence campaigns than ferries, at least once a year since 2014, although none of them have ever gone anywhere. She has burnt more bridges than she has built. Admittedly, she has not built any bridges, but you get my meaning. And technically, every train service that has been cancelled, all 700 of them on a daily basis, is now officially “not running late”. The woman is a complete genius. I don’t know what else to say. No one else could possibly compete. Victor Clements, Aberfeldy, Perthshire. 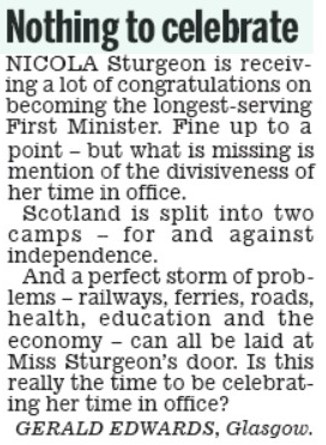 Nicola Sturgeon is receiving a lot of congratulations on becoming the longest-serving First Minister. Fine up to a point – but what is missing is mention of the divisiveness of her time in office. Scotland is split into two camps – for and against independence. And a perfect storm of problems – railways, ferries, roads, health, education and the economy – can all be laid at Miss Sturgeon’s door. Is this really the time to be celebrating her time in office? Gerald Edwards, Glasgow. 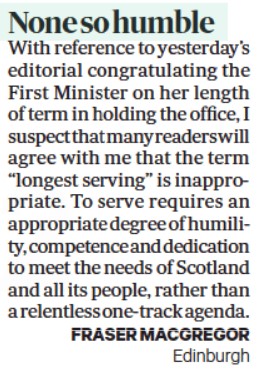 With reference to yesterday’s editorial congratulating the First Minister on her length of term in holding the office, I suspect that many readers will agree with me that the term longest-serving” is inappropriate. To serve requires an appropriate degree of humility, competence and dedication to meet the needs of Scotland and all its people, rather than a relentless one-track agenda. Fraser MacGregor, Edinburgh. 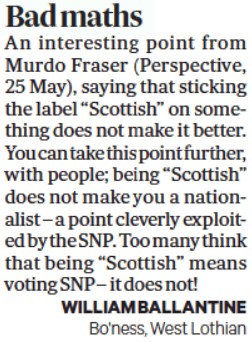 An interesting point from Murdo Fraser (Perspective, 25 May), saying that sticking the label “Scottish” on something does not make it better. You can take this point further, with people; being “Scottish” does not make you a nation-alist-a point cleverly exploit-ed by the SNP. Too many think that being “Scottish” means voting SNP- it does not! William Ballantine, Bo’ness, West Lothian.