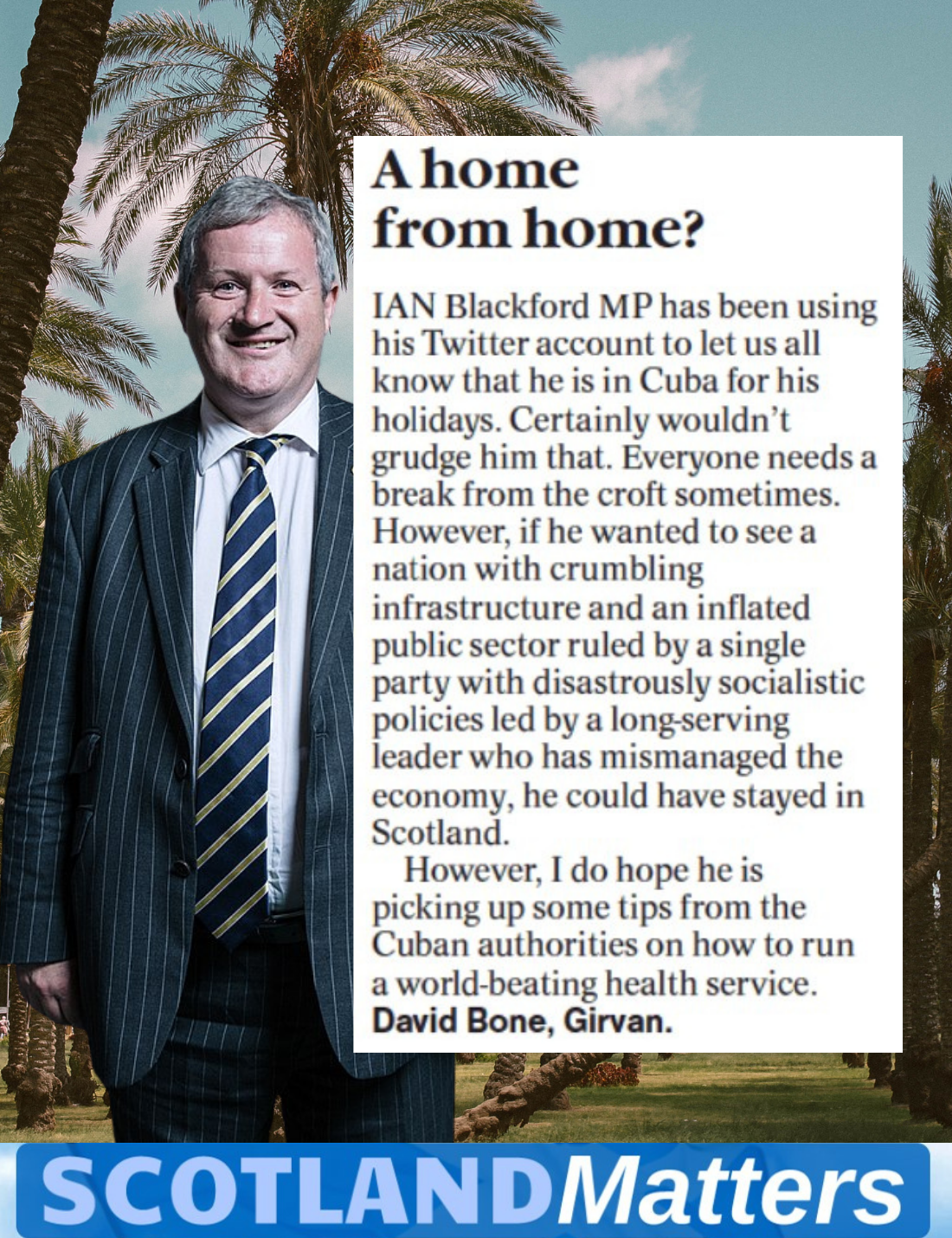 Ian Blackford MP has been using his Twitter account to let us all know that he is in Cuba for his holidays. Certainly wouldn’t grudge him that. Everyone needs a break from the croft sometimes. However, if he wanted to see a nation with crumbling infrastructure and an inflated public sector ruled by a single party with disastrously socialistic policies led by a long-serving leader who has mismanaged the economy, he could have stayed in Scotland. However, I do hope he is picking up some tips from the Cuban authorities on how to run a world-beating health service. David Bone, Girvan. 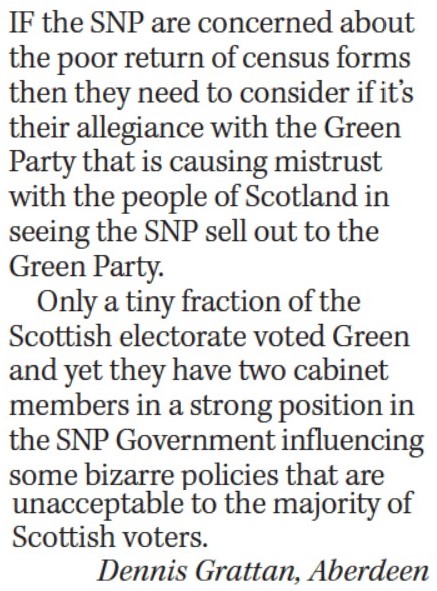 IF the SNP are concerned about the poor return of census forms then they need to consider if it’s their allegiance with the Green Party that is causing mistrust with the people of Scotland in seeing the SNP sell out to the Green Party. Only a tiny fraction of the Scottish electorate voted Green and yet they have two cabinet members in a strong position in the SNP Government influencing some bizarre policies that are unacceptable to the majority of Scottish voters. Dennis Grattan, Aberdeen

The meltdown by SNP supporters in Fife about the supposed lack of democracy evinced by Labour forming a minority administration betrays a basic lack of understanding of the single transferable vote system used in local government elections. It is not a first past the post, winner takes all system, but one designed to produce hung councils and collaboration between different parties. Local SNP councillors may be sore losers but they should know better than to denounce the entirely legitimate working of a democratic vote because it plays to their supporters’ ignorance and hunger for anti-unionist grievance. Even more ludicrous is the scaremongering claim that a Labour minority administration puts the Ibry bogeyman in charge in Fife – only two Tory councillors will sit on the policy-deciding executive committee. What is urgently needed is less nationalist grandstanding and much better civic education in our schools so voters understand the way Scotland’s three voting procedures work Of course Labour, Lib Dems and Conservatives could have chosen to install an SNP administration at Fife House. We’ve just come out of five years of SNP-labour coalition in Fife. SNP supporters should reflect on why, if this was so glorious, Labour councillors didn’t fancy another five years. The answer has nothing to do with a unionist plot and everything to do with sharing an administration with a local party whose supreme purpose is to shore up support for the SNP government at Holyrood and its divisive, separatist agenda. What that meant in practice in the last administration is that Fife Labour was hamstrung, forced by its SNP coalition partner to pay lip service to an SNP Government that is essentially hostile to local government. This can be seen in the continual cuts to core council budgets and the centralising instinct which sees councils as mere implementers of national diktats. Anyone who believes councils should be more than mere puppets of national government will welcome the new administration in Fife. Linda Holt, Dreel House, Anstruther.

There seems to be a new iron rule in Scottish politics: if Holyrood insists on doing things differently from the UK Government, the outcome is worse. If you change your tax bands, to levy more tax on even the moderately well-off, the end result is a lower tax take, not the increase in revenue that you anticipated. If you change the date of your ten-year census – not because of Covid, given that an election was held in 2021- and try to carry it out yourself instead of as an integral part of the UK, as normal, then you get a lower rate of completion. In some areas, which, whether coincidentally or not, are Scottish nationalist strongholds like Dundee, the rate of return is so much lower than normal as to be pretty much worthless for future planning. It remains to be seen whether the nature of the questions contributed to this failure. Intrusive and restrictive questions about nationality and gender perhaps discouraged some from completing the form. As it is, Scotland is predicted to have a rate of census return well below the necessary 94 per cent and to have by 2026-27 a deficit of f3.5billion. Is this really what Scots were voting for in 1998 when they chose devolution? Jill Stephenson, Edinburgh.

One in eight Scots awaiting hospital treatment as NHS ‘under pressure’...
Scroll to top