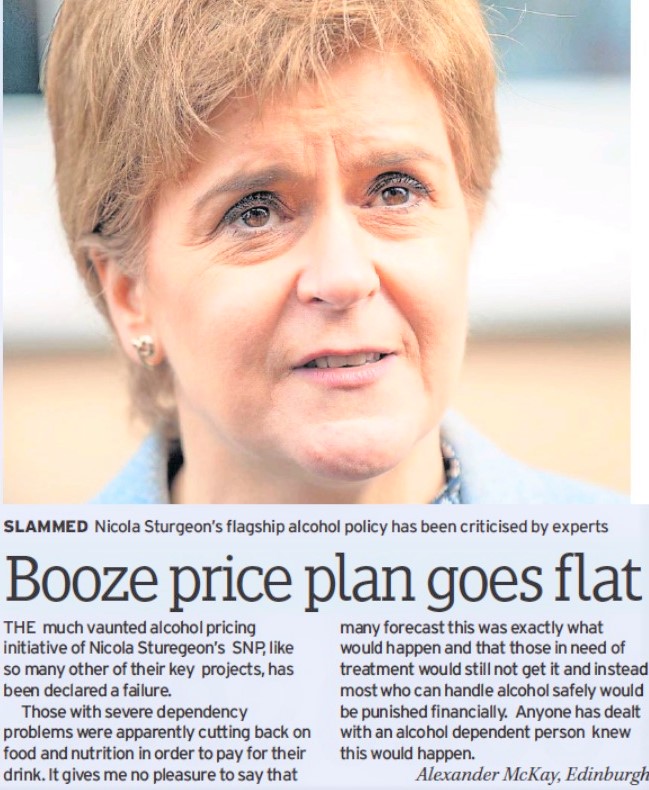 The much-vaunted alcohol pricing initiative of Nicola Sturgeon’s SNP, like so many other of their key projects, has been declared a failure. Those with severe dependency problems were apparently cutting back on food and nutrition in order to pay for their drink. It gives me no pleasure to say that many forecast this was exactly what would happen and that those in need of treatment would still not get it and instead most who can handle alcohol safely would be punished financially. Anyone who has dealt with an alcohol dependent person knew this would happen. Alexander McKay, Edinburgh. 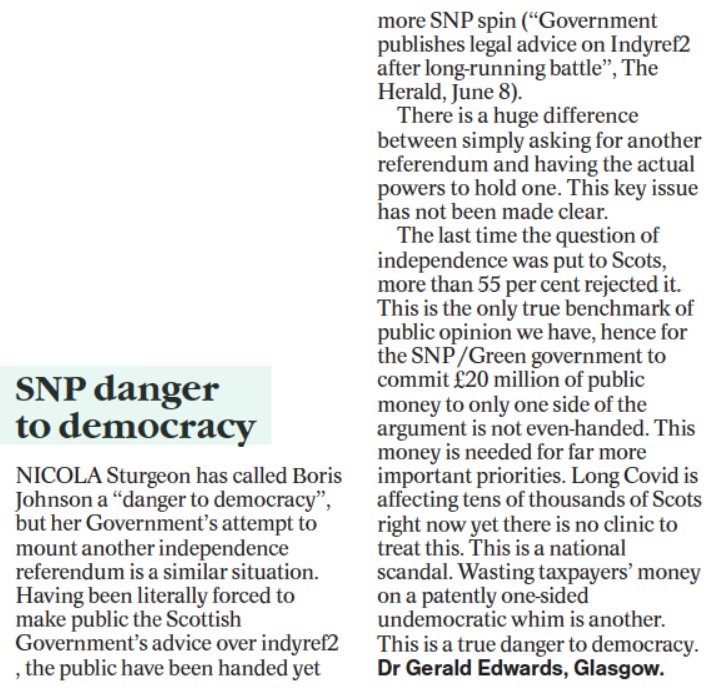 Nicola Sturgeon has called Boris Johnson a “danger to democracy”, but her Government’s attempt to mount another independence referendum is a similar situation. Having been literally forced to make public the Scottish Government’s advice over indyref2, the public have been handed yet more SNP spin (“Government publishes legal advice on Indyref2 after long-running battle”, The Herald, June 8). There is a huge difference between simply asking for another referendum and having the actual powers to hold one. This key issue has not been made clear. The last time the question of independence was put to Scots, more than 55 per cent rejected it. This is the only true benchmark of public opinion we have, hence for the SNP/Green government to commit £20 million of public money to only one side of the argument is not even-handed. This money is needed for far more important priorities. Long Covid is affecting tens of thousands of Scots right now yet there is no clinic to treat this. This is a national scandal. Wasting taxpayers’ money on a patently one-sided undemocratic whim is another. This is a true danger to democracy. Dr Gerald Edwards, Glasgow. 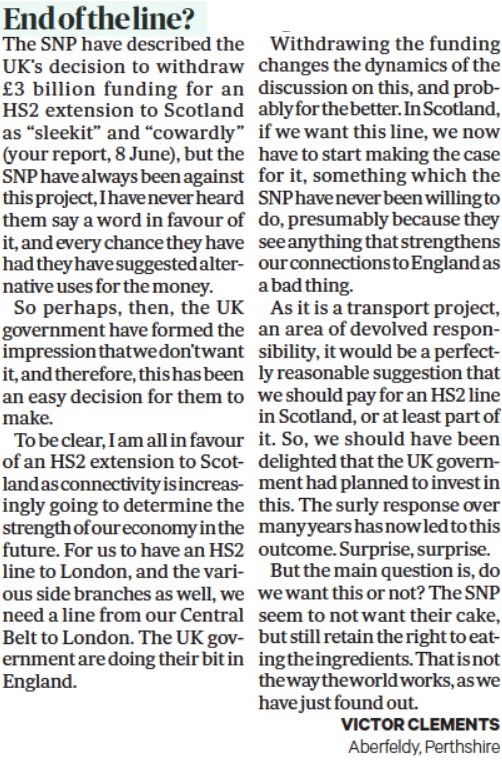 The SNP have described the UK’s decision to withdraw £3 billion funding for an HS2 extension to Scotland as “sleekit” and “cowardly” (your report, 8 June), but the SNP have always been against this project, I have never heard them say a word in favour of it, and every chance they have had they have suggested alter-native uses for the money. So perhaps, then, the UK government have formed the impression that we don’t want it, and therefore, this has been an easy decision for them to make. To be clear, I am all in favour of an HS2 extension to Scotland as connectivity is increasingly going to determine the strength of our economy in the future. For us to have an HS2 line to London, and the various side branches as well, we need a line from our Central Belt to London. The UK government are doing their bit in England. Withdrawing the funding changes the dynamics of the discussion on this, and probably for the better. In Scotland, if we want this line, we now have to start making the case for it, something which the SNP have never been willing to do, presumably because they see anything that strengthens our connections to England as a bad thing. As it is a transport project, an area of devolved responsibility, it would be a perfectly reasonable suggestion that we should pay for an HS2 line in Scotland or at least part of it. So, we should have been delighted that the UK government had planned to invest in this. The surly response over many years has now led to this outcome. Surprise, surprise. But the main question is, do we want this or not? The SNP seem to not want their cake, but still retain the right to eating the ingredients. That is not the way the world works, as we have just found out. Victor Clements, Aberfeldy, Perthshire 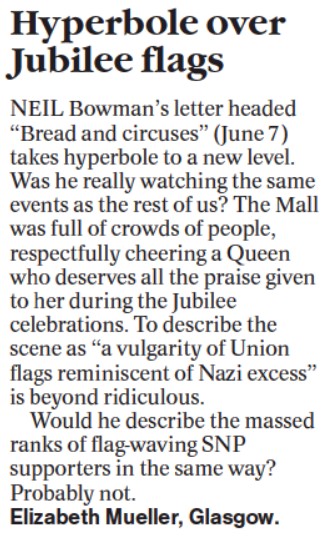 Neil Bowman’s letter headed “Bread and circuses” (June 7) takes hyperbole to a new level. Was he really watching the same events as the rest of us? The Mall was full of crowds of people, respectfully cheering a Queen who deserves all the praise given to her during the Jubilee celebrations. To describe the scene as “a vulgarity of Union flags reminiscent of Nazi excess” is beyond ridiculous. Would he describe the massed ranks of flag-waving SNP supporters in the same way? Probably not. Elizabeth Mueller, Glasgow.

Scotland is a Zombie Nation – Notes on Nationalism
Scroll to top