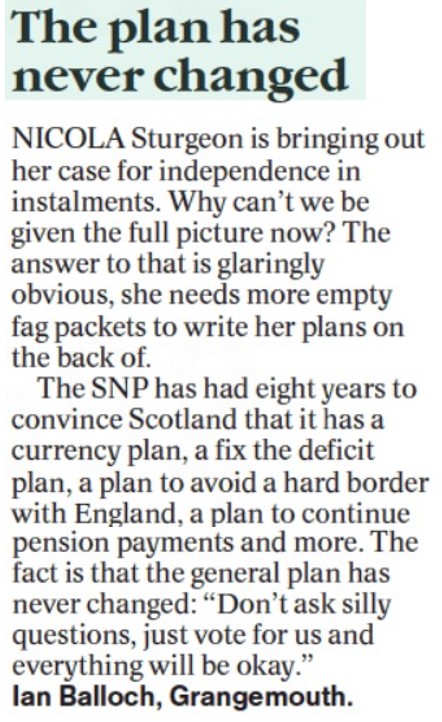 Nicola Sturgeon is bringing out her case for independence in instalments. Why can’t we be given the full picture now? The answer to that is glaringly obvious, she needs more empty fag packets to write her plans on the back of. The SNP has had eight years to convince Scotland that it has a currency plan, a fix the deficit plan, a plan to avoid a hard border with England, a plan to continue pension payments and more. The fact is that the general plan has never changed: “Don’t ask silly questions, just vote for us and everything will be okay.” Ian Balloch, Grangemouth. 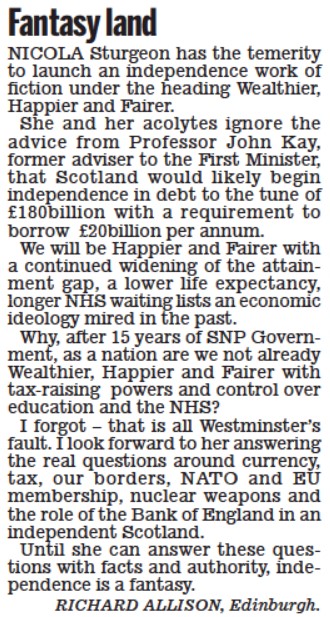 Nicola Sturgeon has the temerity to launch an independence work of fiction under the heading Wealthier, Happier and Fairer. She and her acolytes ignore the advice from Professor John Kay, a former adviser to the First Minister, that Scotland would likely begin independence in debt to the tune of £180billion with a requirement to borrow £ 20 billion per annum. We will be Happier and Fairer with a continued widening of the attainment gap, a lower life expectancy, longer NHS waiting lists an economic ideology mired in the past. Why, after 15 years of SNP Government, as a nation are we not already Wealthier, Happier and Fairer with tax-raising powers and control over education and the NHS? I forgot – that is all Westminster’s fault. I look forward to her answering the real questions around currency, tax, our borders, NATO and EU membership, nuclear weapons and the role of the Bank of England in an independent Scotland. Until she can answer these questions with facts and authority, independence is a fantasy. Richard Allison, Edinburgh.

I watched the “Scene Setter” press conference. Judging by informed and mildly hostile media questioning, newspaper reports will be sceptical at best and many commentary articles will be scathing. If everyone in Scotland read these, Indyref2 would be a dead duck. The problem is, perhaps only 300,000 people read the papers and an additional 500,000 watch the Scottish TV news channels. which won’t be able to hide the folly of the whole enterprise but will do their best to maintain the balance it just does not deserve. But there are 4.3 million voters in Scotland, the majority of whom will be unaware that this charade even happened, therefore it will go on and on. When I look at and listen to Patrick Harvie and Nicola Sturgeon I just despair at the decline of Scotland. Allan Sutherland, Stonehaven, Aberdeenshire. 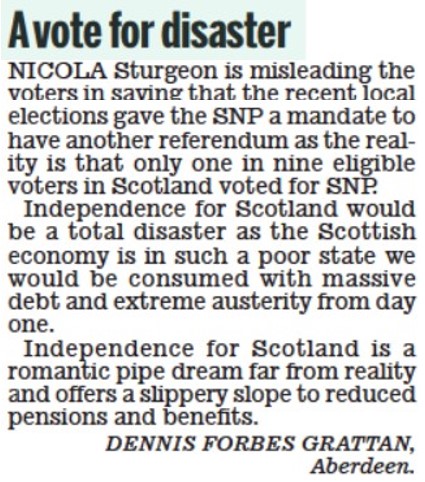 Nicola Sturgeon is misleading the voters in saying that the recent local elections gave the SNP a mandate to have another referendum as the reality is that only one in nine eligible voters in Scotland voted for SNP Independence for Scotland would be a total disaster as the Scottish economy is in such a poor state we would be consumed with massive debt and extreme austerity from day one. Independence for Scotland is a romantic pipe dream far from reality and offers a slippery slope to reduced pensions and benefits. Dennis Forbes Grattan, Aberdeen.

Domestic crises, apparently without number, are continually ignored and instead the First Minister is announcing her latest plans on the road towards the goal of breaking up the UK. This is a continuing assurance for her zealots that one issue only gets attention until presumably even her hardcore support realise it simply ain’t going to happen. Not another item of policy or direction gets any real focus or care. Fasten seat belts for more division, more rancour, more grievance, more systemic incompetence, more grandstanding, more foul-ups, ad infinitum. When future historians write of this period in Scottish history, devolution – which allows this mockery of governance – will surely go down as the worst decision that was ever made in the long history of this country. Alexander McKay, Edinburgh. 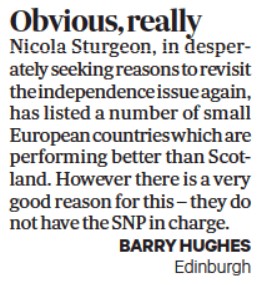 Nicola Sturgeon, in desperately seeking reasons to revisit the independence issue again, has listed a number of small European countries which are performing better than Scotland. However, there is a very good reason for this — they do not have the SNP in charge. Barry Hughes, Edinburgh

Covid inquiry: Health of children in Scotland ‘amongst lowest in Europe’...
Scroll to top