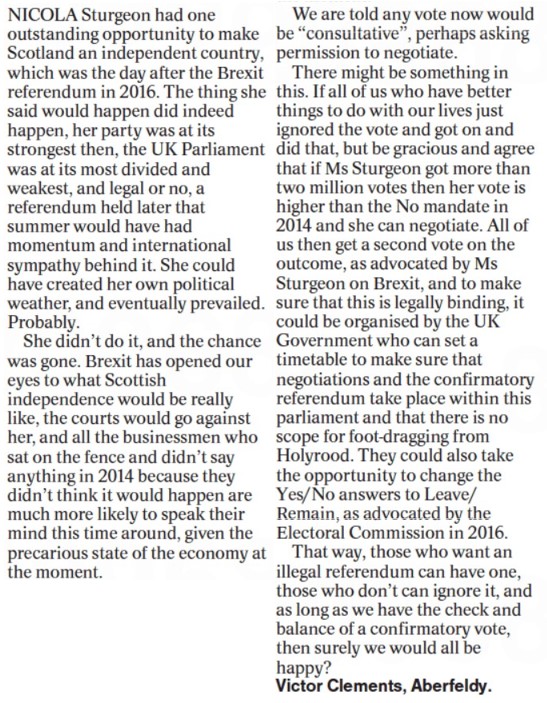 Nicola Sturgeon had one outstanding opportunity to make Scotland an independent country, which was the day after the Brexit referendum in 2016. The thing she said would happen did indeed happen, her party was at its strongest then, the UK Parliament was at its most divided and weakest, and legal or not, a referendum held later that summer would have had momentum and international sympathy behind it. She could have created her own political weather, and eventually prevailed. Probably. She didn’t do it, and the chance was gone. Brexit has opened our eyes to what Scottish independence would be really like, the courts would go against her, and all the businessmen who sat on the fence and didn’t say anything in 2014 because they didn’t think it would happen are much more likely to speak their mind this time around, given the precarious state of the economy at the moment. We are told any vote now would be “consultative”, perhaps asking permission to negotiate. There might be something in this. If all of us who have better things to do with our lives just ignored the vote and got on and did that, but be gracious and agree that if Ms Sturgeon got more than two million votes then her vote is higher than the No mandate in 2014 and she can negotiate. All of us then get a second vote on the outcome, as advocated by Ms Sturgeon on Brexit, and to make sure that this is legally binding, it could be organised by the UK Government who can set a timetable to make sure that negotiations and the confirmatory referendum take place within this parliament and that there is no scope for foot-dragging from Holyrood. They could also take the opportunity to change the Yes/No answers to Leave/ Remain, as advocated by the Electoral Commission in 2016. That way, those who want an illegal referendum can have one, those who don’t can ignore it, and as long as we have the check and balance of a confirmatory vote, then surely we would all be happy? Victor Clements, Aberfeldy.

SCOTLAND MATTERS reached well over 1 million people at the Holyrood election, 1.4m at the Council Elections and in both elections the SNP’s vote and seats won were far below their own predictions.

Now they want another referendum in October 2023. We need to:

However, this costs a LOT of money. PLEASE CONSIDER DONATING TO OUR CROWDFUNDER AND LET’S DERAIL INDYREF2 TOGETHER!!

Surely the purpose of the election of representatives at any level of Government is to ensure that the will of the people is enacted. In 2014 a majority of the electorate decided that Scotland should remain part of the UK. The SNP “independence” proposals were rejected, and nothing has changed since then. It is quite simply not acceptable for Nicola Sturgeon to demand another referendum after such a short period of time. The phrase used in 2014 was “a once in a generation” event. There is no way eight years can be defined as a generation! Any such attempt by the Nats to change the status quo should be rejected outright. The Scotland Acts, which led to the inauguration of the Scottish Executive, later changed to”Government”, are sacrosanct. There is no provision for the SNP, as a minority administration, to interfere with constitutional matters. These are reserved to West-minster, and no amount of sleight-of-hand by national-ist politicians can change that fact. They are deluding themselves in this respect. Indeed, the Scottish Government should be concentrating all of its efforts on rectify-ing their sub-standard record in the administration of Scotland’s Health, Education, Welfare, Police, Transport, Local Government and all the other key devolved services for which they have responsibility and have singularly failed to produce positive results. Their record is indeed one of abject failure!
Robert IG Scott, Northfield, Edinburgh. 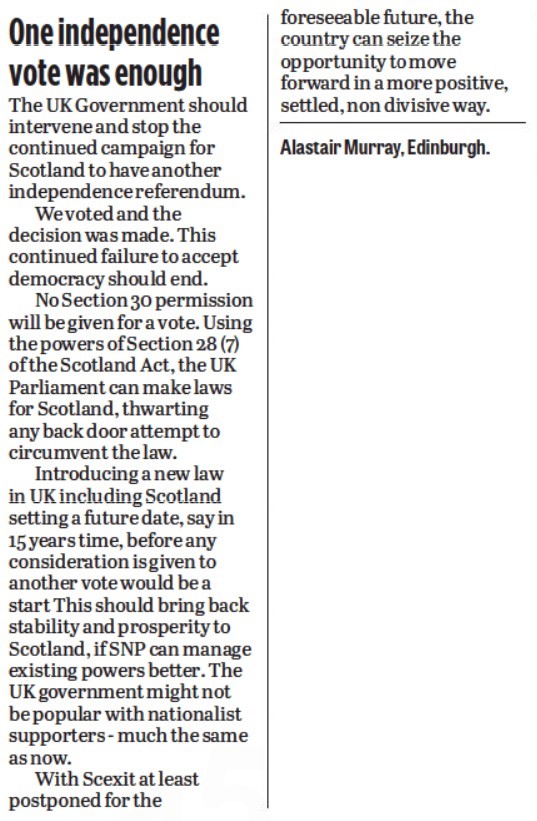 The UK Government should intervene and stop the continued campaign for Scotland to have another independence referendum. We voted and the decision was made. This continued failure to accept democracy should end. No Section 30 permission will be given for a vote. Using the powers of Section 28 (7) of the Scotland Act, the UK Parliament can make laws for Scotland, thwarting any back-door attempt to circumvent the law. Introducing a new law in the UK including Scotland setting a future date, say in 15 years’ time, before any consideration is given to another vote would be a start This should bring back stability and prosperity to Scotland, if SNP can manage existing powers better. The UK government might not be popular with nationalist supporters – much the same as now. With Scexit at least postponed for the foreseeable future, the country can seize the opportunity to move forward in a more positive, settled, non-divisive way. Alastair Murray, Edinburgh. 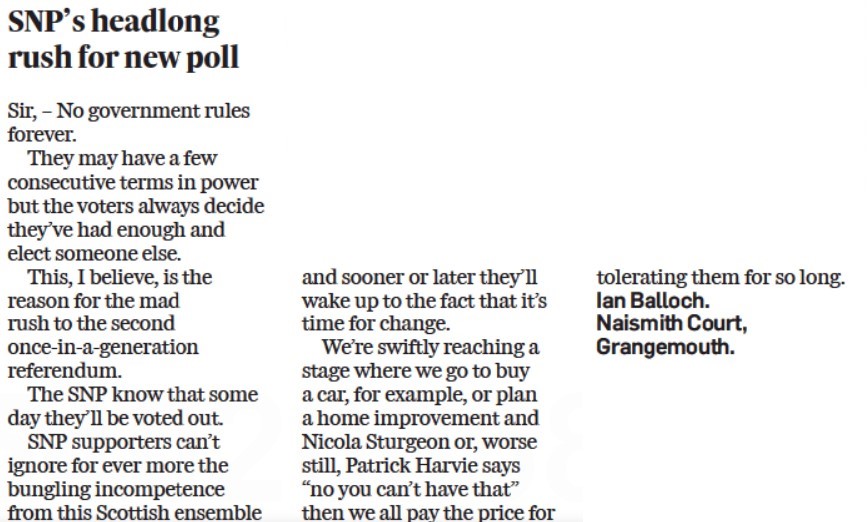 No government rules forever. They may have a few consecutive terms in power but the voters always decide they’ve had enough and elect someone else. This, I believe, is the reason for the mad rush to the second once-in-a-generation referendum. The SNP know that someday they’ll be voted out. SNP supporters can’t ignore for evermore the bungling incompetence from this Scottish ensemble and sooner or later they’ll wake up to the fact that it’s time for change. We’re swiftly reaching a stage where we go to buy a car, for example, or plan a home improvement and Nicola Sturgeon or, worse still, Patrick Harvie says “no you can’t have that” then we all pay the price for tolerating them for so long. Ian Balloch. Naismith Court, Grangemouth. 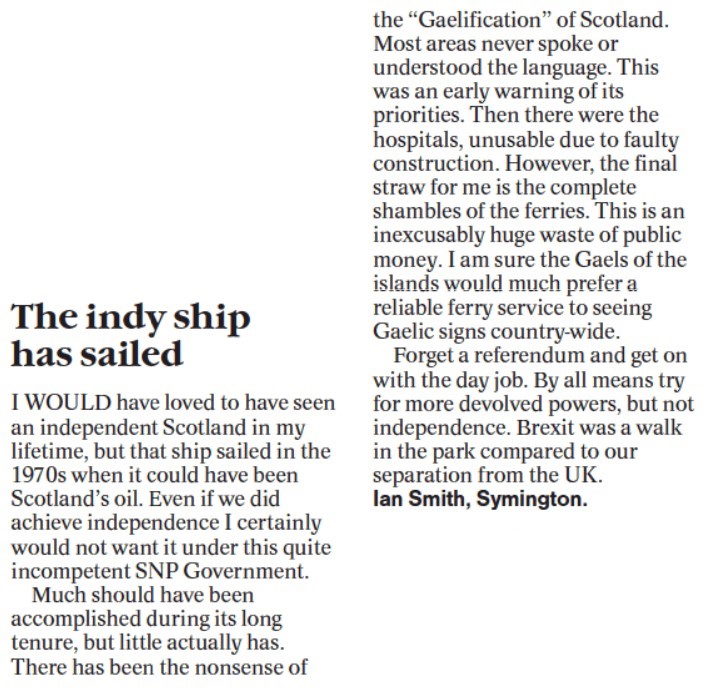 I would have loved to have seen an independent Scotland in my lifetime, but that ship sailed in the 1970s when it could have been Scotland’s oil. Even if we did achieve independence I certainly would not want it under this quite incompetent SNP Government. Much should have been accomplished during its long tenure, but little actually has. There has been the nonsense of the “Gaelification” of Scotland. Most areas never spoke or understood the language. This was an early warning of its priorities. Then there were the hospitals, unusable due to faulty construction. However, the final straw for me is the complete shambles of the ferries. This is an inexcusably huge waste of public money. I am sure the Gaels of the islands would much prefer a reliable ferry service to seeing Gaelic signs country-wide. Forget a referendum and get on with the day job. By all means, try for more devolved powers, but not independence. Brexit was a walk in the park compared to our separation from the UK. Ian Smith, Symington.