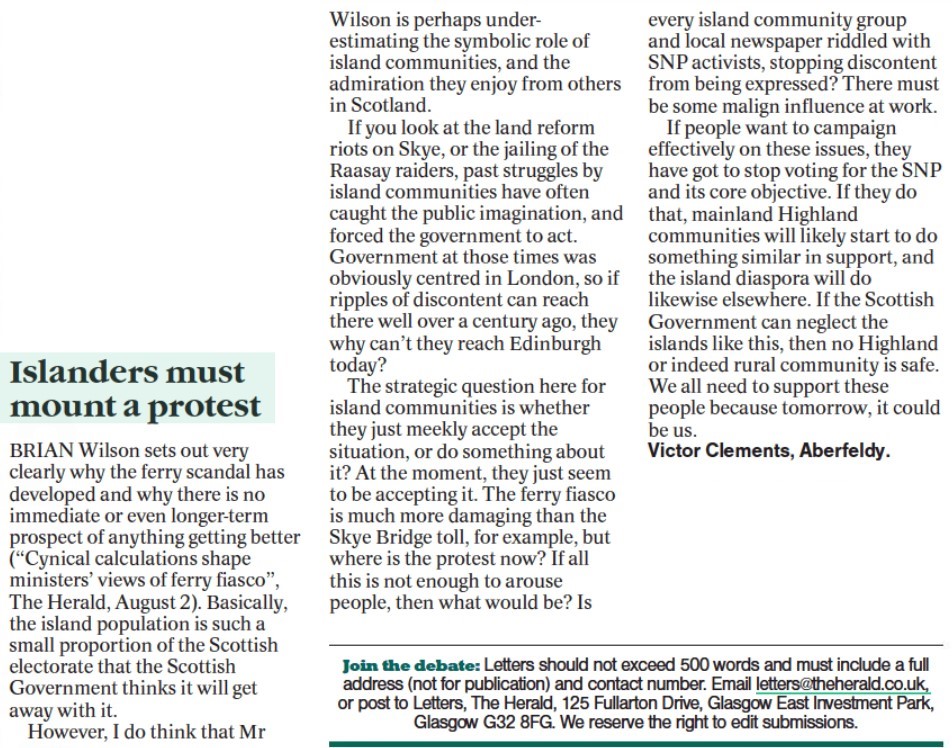 Brain Wilson sets out very clearly why the ferry scandal has developed and why there is no immediate or even longer-term prospect of anything getting better (“Cynical calculations shape ministers’ views of ferry fiasco”, The Herald, August 2). Basically, the island population is such a small proportion of the Scottish electorate that the Scottish Government thinks it will get away with it. However, I do think that Mr Wilson is perhaps under-estimating the symbolic role of island communities and the admiration they enjoy from others in Scotland. If you look at the land reform riots on Skye, or the jailing of the Raasay raiders, past struggles by island communities have often caught the public imagination and forced the government to act. Government at those times was obviously centred in London, so if ripples of discontent can reach there well over a century ago, they why can’t they reach Edinburgh today? The strategic question here for island communities is whether they just meekly accept the situation, or do something about it? At the moment, they just seem to be accepting it. The ferry fiasco is much more damaging than the Skye Bridge toll, for example, but where is the protest now? If all this is not enough to arouse people, then what would be? Is every island community group and local newspaper riddled with SNP activists, stopping discontent from being expressed? There must be some malign influence at work. If people want to campaign effectively on these issues, they have got to stop voting for the SNP and its core objective. If they do that, mainland Highland communities will likely start to do something similar in support, and the island diaspora will do likewise elsewhere. If the Scottish Government can neglect the islands like this, then no Highland or indeed rural community is safe. We all need to support these people because tomorrow, it could be us. Victor Clements, Aberfeldy. 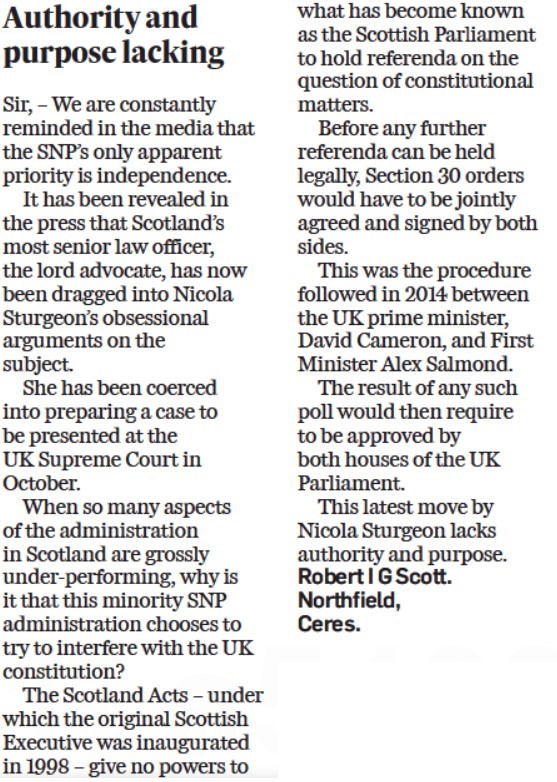 Sir, – We are constantly reminded in the media that the SNP’s only apparent priority is independence. It has been revealed in the press that Scotland’s most senior law officer, the lord advocate, has now been dragged into Nicola Sturgeon’s obsessional arguments on the subject. She has been coerced into preparing a case to be presented at the UK Supreme Court in October. When so many aspects of the administration in Scotland are grossly under-performing, why is it that this minority SNP administration chooses to try to interfere with the UK constitution? The Scotland Acts – under which the original Scottish Executive was inaugurated in 1998 – give no powers to what has become known as the Scottish Parliament to hold referenda on the question of constitutional matters. Before any further referenda can be held legally, Section 30 orders would have to be jointly agreed and signed by both sides. This was the procedure followed in 2014 between the UK prime minister, David Cameron, and First Minister Alex Salmond. The result of any such poll would then require to be approved by both houses of the UK Parliament. This latest move by Nicola Sturgeon lacks authority and purpose. Robert I G Scott. Northfield, Ceres.

SCOTLAND MATTERS reached well over 1 million people at the Holyrood election, 1.4m at the Council Elections and in both elections the SNP’s vote and seats won were far below their own predictions.

Now they want another referendum in October 2023. We need to:

However, this costs a LOT of money. PLEASE CONSIDER DONATING TO OUR CROWDFUNDER AND LET’S DERAIL INDYREF2 TOGETHER!!

It was with absolute scorn that I read your article about SNP ministers trying to get all references to the 1966 England World Cup football win removed from the book marking the Queen’s Platinum Jubilee. That is taking their usual grievance culture way beyond the pale. Do they want to rewrite history now? I wonder how many SNP ministers watched the Lionesses bring home the European Championship on Sunday night? Are they now to be expelled from the party for daring to support England or (whisper it) were they sworn to support Germany as a show of unity against our perceived English oppressors? Not only was the little book to mark the Jubilee meant to go to all primary schoolchildren, a move which the SNP vetoed, only allowing a proportion of the books to be distributed, the book was to commemorate and celebrate a very long reign by the Queen, telling of some of the historic moments during the 70 years, definitely something our children should know about. The sheer pettiness of the SNP is truly appalling. It has had 15 years to make Scotland healthier, happier, more productive or whatever its current slogan is. It seems to me we are none of these, and there really is no one to blame except the SNP. Celia Judge, Ayr. 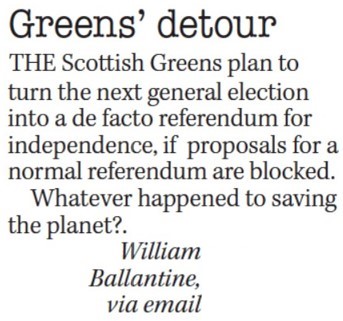 The Scottish Greens plan to turn the next general election into a de facto referendum for independence, if proposals for a normal referendum are blocked. Whatever happened to saving the planet? William Ballantine, via email.

New education agency should be ‘responsible for closing attainment gap’...
Scroll to top