Scotland Matters have hired an advan to tour Westminster displaying a letter to Boris Johnson which says “There are around 4.3m voters in Scotland. Only 1.3m, less than one third, voted for SNP, How can that be a manifesto for a second referendum?”

A spokesman for Scotland Matters said, “only a week ago polls were predicting a landslide for the SNP, and despite Nicola Sturgeon spinning the result this way, they failed to get an overall majority and are sustained in power by the Scottish Greens, a party whose manifesto trumpeted an accelerated shut down of our oil and gas industry, the very backbone of the SNP’s 2014 referendum campaign. They won this “tail wagging the dog” role by scamming the system and winning 8 seats with only 34,000 first preference votes.

How on earth is this a “historic victory” and mandate for another independence referendum which will be based on vote share, not seats won?

Scotland’s outlook is for more years of debate, division and decline, our best people leaving and investors shying away to more stable regions, such as North East England, run by a UK government whose focus on “levelling up” is attracting widespread electoral support and inward investment without bribing the locals with laptops, baby boxes and bikes.

Scotland Matters’ advans, newspaper adverts, billboards and social media campaign, (https://www.scotlandmatters.co.uk/billboards/) along with other groups supporting and promoting widespread demand for tactical voting almost saved the day for pro-UK parties. We urge them to take a look at what is happening across the border for inspiration, and we urge the Prime Minister to stand firm on his refusal to agree to a second referendum”.

‘Nothing Super About This Majority Puppet Show’ Billboard by Scotland Matters

Scotland Matters has erected billboards in Edinburgh, Glasgow and Aberdeen.

They show Patrick Harvie, and Nicola Sturgeon being manipulated by the controlling ‘Puppet Master’, former First Minister, Alex Salmond and current leader of the Alba party.

A spokesman for Scotland Matters said: ‘The most recent billboard in our ongoing series sees three of the independence movements most ardent adherents strung together in an obsessive performance above Scotland, while the nations essential services, private businesses and critical infrastructure is neglected once again.’

‘Salmond, Sturgeon and Harvie’s mono-obsession with independence has kept Scotland stuck in limbo for what is now approaching a decade, while repeatedly treating the issues that all Scots want Holyrood to concentrate on as a mere puppet show: post-covid recovery, economic development, the NHS and the environment.

‘If pro-indy parties secure a majority on May the 6th all Scotland can look forward to is further division, decline and the constant threat of Scotland seceding from one of the worlds most successful and long-lasting unions with the other nations of the UK; thus why Scotland Matters supports tactical voting in the forthcoming election.’

The Billboards are at the following locations:

It depicts Nicola Sturgeon and Alex Salmond on the prow of a rusting ferry, the “Glen Alba” in the “Supermajority Shipbuilders” yard, in a parody of the famous scene in the film “Titanic”.

A spokesman for Scotland Matters said “our billboard pairs the two people whose close relationship has dominated Scottish life and politics for the last 14 years, with one example of their incompetence, the overdue and over-budget ferries for CalMac which a Holyrood enquiry described as a “catastrophic failure”.

“In their obsessive pursuit of Scottish independence, Alex Salmond and Nicola Sturgeon have trashed Scotland’s education system, conducted, and still pursue, an independence campaign full of undeliverable promises, creating division in our country, fomenting anti-English feeling, and their recent scandals and cover-ups have tarnished Scotland’s good name here and abroad.

They are trying to grip Scotland in a deadly “supermajority” alliance in order to steal the Holyrood election and subject us to five more years of decline, division, sleaze and Indy can-kicking instead of working with all parties to deliver a sustainable recovery from Covid.

The fact that non-existent windows had to be painted on the ferry symbolises the all style and no substance Salmond and Sturgeon years and we urge and encourage Scottish voters and the pro-UK parties to work together, to ensure our votes are not split and wasted.”

Scotland Matters has erected billboards in Edinburgh, Glasgow and Aberdeen depicting Nicola Sturgeon being presented with her report card on a blackboard by a stern headmaster while her fellow classmates, Education Minister John Swinney reads a book entitled “Education for Dummies”, Health Minister Jeane Freeman puffs a cigarette and Alex Salmond throws paper missiles at her. Ms Sturgeon is wearing a dunce’s cap while class pet Patrick Harvie consoles her.

A spokesman for Scotland Matters said: “this cartoon says it all about the sorry state of Scottish affairs under the SNP. Failed policies, scandal and untalented, worn-out politicians and we urge the people of Scotland to turn out in their millions on the 6th of May to vote them out.”

The Billboards are at the following locations:

It shows Nicola Sturgeon wielding a giant pair of scissors in a re-enactment of her government’s cuts to services at Inverclyde Royal Hospital after promising to retain them.

Sturgeon misled the people of Inverclyde

In an interview with a local newspaper just before the 2016 Scottish Parliament Elections, Nicola Sturgeon assured readers and voters that removal of services would not happen. The last five years we have seen service after service cut from Inverclyde Royal and centralised.

Here’s what she said as she was photographed reclining on a sofa and browsing through a copy of the local paper;

“There is no substance to fears that have been expressed over the future of Inverclyde Royal Hospital. Understandably, there is sensitivity about services being centralised out of the hospital. There are no plans to centralise services out of Inverclyde. The reassurance I would give to people is that I understand all too well why this hospital is so important to people locally, and we value local provision of services.” 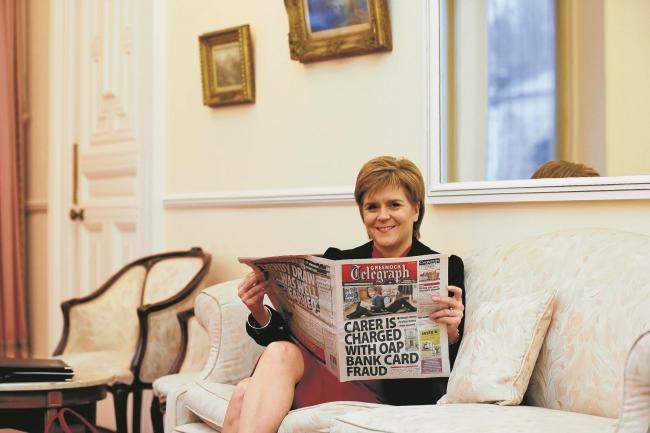 Quote from Spokesperson for Inverclyde ‘Yes to the UK’ said –

“We in Inverclyde remember Ms Sturgeon’s words of reassurance but now we know they were purely to secure votes for her candidate Stuart McMillan MSP. They have both stood by and said nothing as service after service has left the local hospital.

They have also ignored repeated warnings that investment in the fabric of the building itself was needed, resulting in it now being reputed to require in the region of £100 million in repairs. We will not forget this on 6th May.”

“When the Inverclyde electorate vote on 6 May, they should remember Nicola Sturgeon’s empty promises on healthcare, education and other issues, and the one promise she may be forced to keep by Alex Salmond, the holding of an unwanted, divisive referendum.